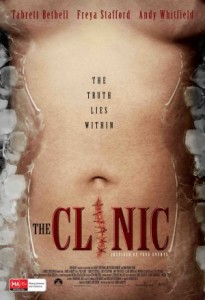 When I first heard about The Clinic, I desperately wanted to see it. I am a huge fan of horror films that are loosely based on true to life crime, and those that have an element of mystery to them, so this film instantly caught my eye. The film starts off with a young mother-to-be named Beth (Tabrett Bethell), who is travelling across the country with her fiancé, Cameron (Andy Whitfield). After a near accident, the couple decide to stay at a roadside motel for the night. Although this opening sounds very stereotypical for the genre, what happens next is a far more unique concept. The Clinic boasts a very unique and frighteningly convincing storyline; the only film to date with even a vaguely similar subject matter is the 2007 film Inside.
A title card at the start of the film states that it is set in 1979 (six years prior to the advent of DNA testing), which shows that this film is going to discuss a new concept that will be very controversial. I admire directors that aren’t afraid to try something new, especially when it is their first feature length film. Writer/director James Rabbitts is dealing with an extremely sensitive and disturbing subject matter, yet he ensures that it isn’t shown with an excessive amount of gore. There are two extremely bloody scenes, but they aren’t unnecessary.  Child abduction is a subject that affects both genders, yet it focuses primarily on the female’s point of view. Rabbitts deserves praise for constructing a convincing representation of mother-to-be’s in peril.
Tabrett Bethell, a relatively unknown actress, does a fantastic job in this film. Her character, Beth, wakes up in a bath of ice to discover her child has been removed by C-section, and this scene is incredibly emotional. It is very easy to become attached to this character, especially from a female perspective. Losing a child is a mother’s worst nightmare, and for Beth, it has been taken from her and she has no idea what has happened or where she is. Her maternal instinct shines throughout the film, even when she is at her most vulnerable, so it is clear she is willing to risk everything to find her baby. I am looking forward to seeing Bethell in future films, as I think she is a very capable young actress.
Meanwhile, Beth’s fiancé is frantically searching for her, whilst beating himself up over the fact he went for a midnight stroll whilst she was sleeping. A negative point about this film could be the idea of a female needing a male with her at all times to protect her from harm; although Beth definitely experiences a gender role reversal later on in the film, which could compensate for this stereotypical representation
This film soon explores the idea of ‘survival of the fittest’, and it becomes an intense struggle for Beth as she unravels the secrets hidden within the ‘clinic’. The film is rife with enigma: the Roman numerals cleverly intertwined in the opening credits, as well as being displayed on the jumpsuits that the victims of the ‘clinic’ are forced to wear, is only one example. The jumpsuits themselves call to mind a prison setting, which only serves to highlight the idea of entrapment for everyone involved.
The Clinic is a chilling tale about motherhood, and just how far a human being can be pushed. I think it is unique, well written, with the right amount of violent content and twists and turns. For those reasons alone, all horror fans should definitely give it a watch.