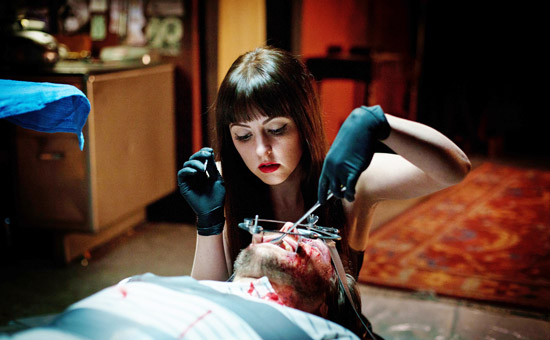 I was lucky enough to see the UK premiere of AMERICAN MARY at Frightfest this summer. I decided not to look into the film too much before watching it, all I knew was that it was about underground surgery and that alone sold me on it. Turns out it was one of the best decisions I’ve made, there were so many twists and turns – I was captivated from start to finish.
The film starts out seemingly normal with a medical student Mary Mason (Katharine Isabelle), trying to find ways to get extra money so that she can stay on her course. As a bright and talented student, she gains unwanted attention of her teacher, which leads her to become involved in the underground world of extreme body modification and plastic surgeries. As Mary’s reputation grows in her new job, she finds her fan base growing each day; this is until a Betty Boop wannabe (Tristan Risk) gives her an offer she can’t refuse.
As soon as I met the Twins and started talking to them about their films, I realised just how passionate they were about filmmaking. I don’t think I’ve ever met anyone who could top their enthusiasm for the industry. In this film especially, the two girls have done their research to the maximum level and it definitely shows. In most films dealing with extreme body modification, the individuals with alterations to their body tend to be shown in a bad light or made out to be outcasts. In AMERICAN MARY however, we are shown that they are just normal people who want to express themselves through their skin. Furthermore, in some scenes the people with body modifications are seen to be better than normal people without it. It’s very interesting to watch – particularly as most of the modifications are real, and not just made up for the film.
This film is miles apart from the Soska twin’s first feature – DEAD HOOKERS IN A TRUNK. As much as I liked their debut film, AMERICAN MARY was elegant, stylish and extremely polished in comparison. Almost every detail in the film was an enormous improvement, especially the character development. The character study of Mary Mason was one of the most impressive I’ve seen, especially in a horror film. At a first glance she’s just a normal girl with unfortunate circumstances, but later into the film, the audience are invited to take a deeper look at her and they will be surprised with what is shown. She is definitely one of the most complex and well written characters I’ve ever came across.
Being a film made by women and about women, there are a few hints at feminist ideology throughout – the most noticeable one in Mary’s rape scene. Most rape scenes in horror films show a lot of nudity and the person doing the raping, enjoying it. Not in this film though, there is minimal nudity, just enough to show what is going on. The scene also concentrates on Mary’s pain and suffering throughout, with a few close-ups of her face. This definitely would make the viewer uncomfortable and subconsciously feel bad for her. It’s great to see things from this perspective and show rape in a totally different way from usual.
My favourite aspect of the film was the impressive visuals – each and every location was set up great and looked stunning on camera. In the more tightly fit settings (such as Mary’s apartment), there is always something in the corner of the screen that adds that little bit extra to the narrative. It takes more than one watch to notice everything that is hidden in the background.  Another thing that I loved was just how realistic the film actually was. At no point during the film did I think that the events on screen couldn’t happen in real life, and that’s what made it so chilling.
There’s only one criticism I have about the film though, and that is because you’d expect a film of this nature to include a lot of gore, but it doesn’t. The majority of the surgical scenes show Mary setting everything up, but then it cuts to after the surgery and the outcomes of it. This isn’t necessarily a bad thing though, as it makes the film more accessible to the horror fans that aren’t big on excessive gore. Who’d have thought that a scene in which a woman gets her nipples cut off and her vagina sewed up could look so classy? If this scene was shown in full, complete with the procedure, then it could well have been one of the most notorious and controversial scenes ever.
AMERICAN MARY is certainly one of the most original and well-written films that I have ever watched. So much so, that in the future I can see it on ‘essential horror films to watch’ lists all over the world. I’m not the only one who sees this though, as Universal Pictures have picked up the film for international distribution. If you haven’t seen this film yet, then I suggest you see it as soon as possible! 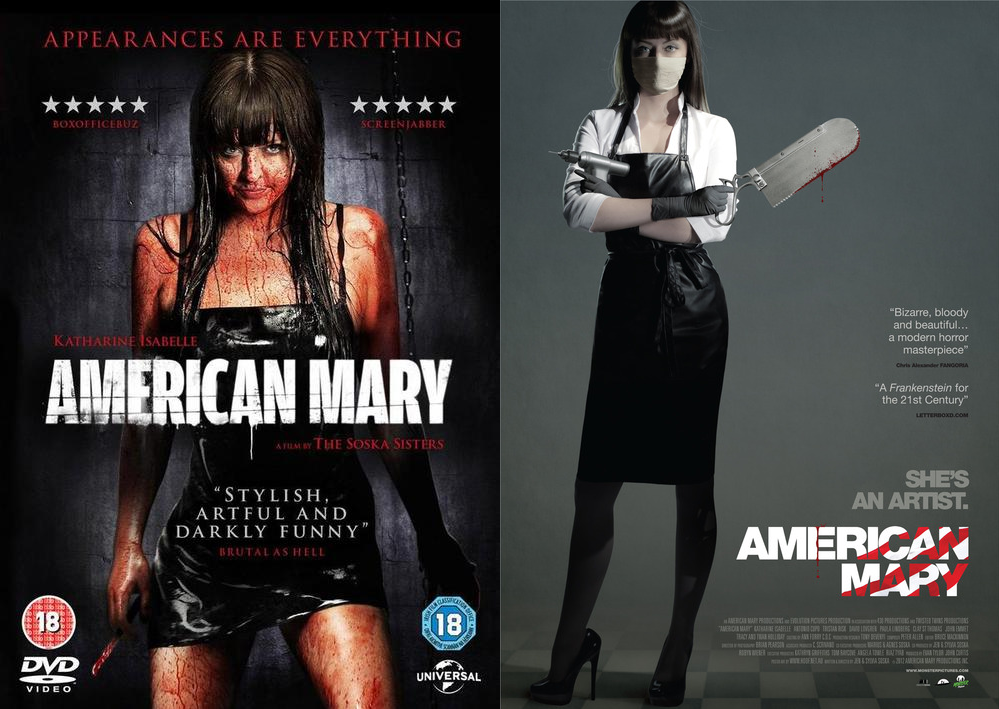