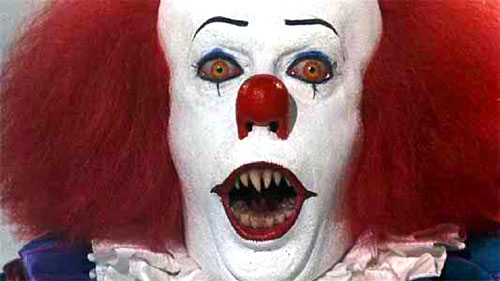 [Warning: The following review contains some spoilers]
There has to be a great degree of difficulty in cramming a 1000+ page horror novel into a 192 minute made-for-television film, but based on the work of writers Lawrence D. Cohen and Tommy Lee Wallace, you’d never know it. The made for television production of Stephen King’s It is a near perfect example of novel-to-film translation that actually works.
The story is too complex to be boiled down to a simplistic plot and is told in two parts, through actions in the “present” day and flashbacks to the 1950’s childhood of seven people who grew up together in the small town of Derry, Maine. Though a combination of years and the after-effects of their special bond has diminished the memories of their 1958 summer from all but one of the now-adult friends, they are all too soon given a shocking reminder.
Central to the story is the character Mike Hanlon (Tim Reid / Marlon Taylor [age 12]), who is the sole member of the ‘Lucky Seven’ who remained in Derry as the years passed. Everyone else left and forgot what they struggled through together, save Mike, who stayed behind in case IT came back. Now the town librarian, Mike finds that it is time to alert and reunite the rest of the Lucky Seven as a series of child murders sweep through Derry, exactly thirty years to date following the last such killing spree… the spree that the Lucky Seven had put a stop to.
In a single summer, the seven social outcasts banded together in a strong bond of friendship and shared fear. They alone among both the children and adults in the little town realized what was going on; that something inhuman was killing the children. Each faced IT and managed to survive, and, afraid no one would believe, they kept it to themselves until finally the leader of their group, Bill Denbrough (Jonathan Brandis [age 12] / Richard Thomas) breaks the silence.
Afflicted with an unfortunate stutter, Bill’s world had gone downhill following the murder of his younger brother, Georgie (Tony Dakota), whose arm had been ripped clean off by what viewers perceived as a fanged clown, Pennywise (Tim Curry), in the sewers. The evil that had taken his brother later finds Bill himself, in the form of an animated photograph that bleeds all over the floor – a blood his parents cannot see. Wracked with guilt – for it was the paper sailboat Bill had made for his younger brother that had sent him out into the rain that day – and emotionally abandoned by his parents, Bill turns to his fellow outcast friends to tell his story, learning that they too knew something was going on outside of the realm of normalcy. 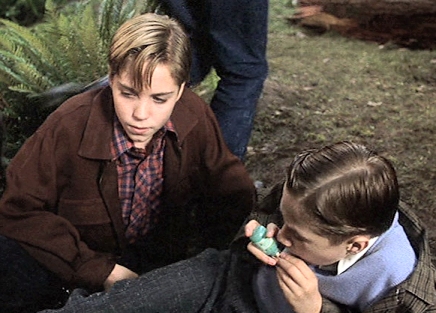 The child actors in the cast were perfection. The ill-fated Jonathan Brandis more than proved himself in the role of the troubled young Bill, with phenomenal support from soon-to-be star Seth Green as funnyman friend Richie Tozier, who faces down a werewolf in the school basement. The child cast rounds out with Marlon Taylor as Mike, Ben Heller as Stan Uris, playing his role of a nervous, disbelieving Boy Scout to a T, Adam Faraizl as the hypochondriac asthmatic Eddie, Brandon Crane as stocky Ben “Haystack” Hanscom, and Emily Perkins (who would later return to the horror genre in the Ginger Snaps films) as abused rag-doll Beverly. They each face their own fears and survive, coming together not only through their shared experiences of facing down IT, but also in their shared torment at the hands of school bully Henry Bowers (Jared Blancard).
The level of emotional torment and fear that these children express is compelling, surpassing performances of even their contemporary adult actors in some cases. Jared Blancard is deliciously evil as the racist, violent and absolutely demented Henry Bowers, showing that in spite of the evil that lurks in the sewers, there are even more real-life experiences the children have to deal with.
In the end, the Lucky Seven find themselves backed into a corner. They must take on IT, if they want to survive and end the reign of terror in Derry. The adults pay them no mind as they put together a plan and venture into the dank sewers of Derry to confront Pennywise, with only a slingshot, two silver earrings and their own solidarity to save them. Once in battle, they realize what they had suspected all along: the clown they see, Tim Curry’s funny and frightening Pennywise, is only what their minds will allow them to see. IT is more than some creepy sewer clown, as IT tells them in the sewer: “I’m every nightmare you’ve ever had. I’m your worst dream come true. I’m everything you ever were afraid of.” Still, the children win a hollow victory and vow that should IT return to Derry, so would they, to defeat it one last time.
Flash forward to present day, and IT’s back full force. Mike realizes they injured IT as children, but IT has only been sleeping through the years and has returned to continue its killing. He calls them back, one by one: Ben, the successful architect (the late John Ritter); Bill, the best-selling horror novelist (Richard Thomas); Beverly, who is involved in the fashion industry (Annette O’Toole); Eddie, who runs a chauffeur business (the far underrated Dennis Christopher); Stan, a businessman (Richard Masur) and Richie, a now famous comedian (Harry Anderson). Each is confronted with his or her own hidden memories as they return, or, in some cases, fail to do so. IT calls back to Derry the now institutionalized Henry Bowers (Michael Cole), who is even crazier than before. All the pieces are in place for the final battle. 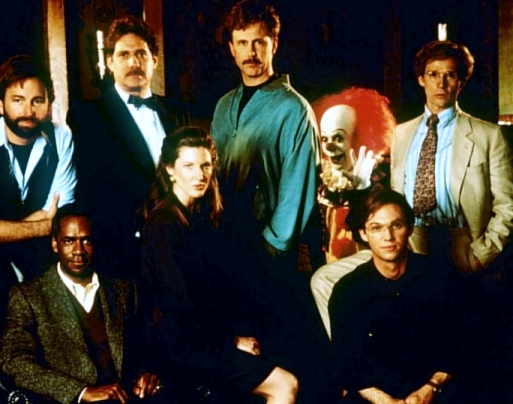 The only real problem with this film comes at the end. Shying away from the perennial book-to-film debate, the fact does remain that the ending in the movie does not do the book justice. This problem lies in the strong build to reveal the true face of IT, ending only in a gigantic spider that becomes all that the aged minds of the remaining Lucky Seven will allow them to see. For those not having read the book, this can seem to fall flat and just short of a good ending. Even the hints dropped throughout the film that a human mind will never grasp the true nature of IT are not enough to save it. Perhaps if the film had been made five or six years later, advances in CGI and special effects could have come up with a better end.
Apart from that, the film is near-flawless. The score is spectacular, with use of Beethoven’s already haunting Für Elise melody against the dreary, rainy backdrop of the small Maine town compounding the creepy quality of the film. The main theme continues this haunting trend, producing a highly recognizable sound while perpetuating the hopeless feel of the impending battles.
The adult casting is just as good as that of the children, the only real problem lying in the casting of Richard Masur as the adult Stan. A good actor, no doubt, Masur brings his own quality to the role, and while his counterparts manage to portray believable adult personas for their child characters, Masur is so unlike the young Stan that it just doesn’t play well. Tim Curry is, of course, phenomenal as Pennywise the Clown, no doubt instilling nightmares with his chilling yet comical performance for years to come. Best of all is Dennis Christopher, a much underrated actor who, while typically typecast into darker roles (Fade to Black’s Eric Binford and “Profiler”s Jack-of-all-Trades) manages to shine in his role of the mousey Eddie Kaspbrak. All in all this is a great film, and one of the best film translations of a Stephen King novel to date.
Keeping in line with the current trend of remaking anything and everything, IT has been optioned for another film, however details are sparse as to just where and when viewers may catch a glimpse of it. Originally rumored to be a CW-helmed made for television film, the few details available seem to hint at the novel being split into two major films, with Seth Grahame-Smith of Abraham Lincoln, Vampire Hunter fame producing, and David Kajganich, writer of the 2009 film Blood Creek tapped to collaborate on the screenplay.
It’s a pity they don’t try and tackle a much less successful made for televsion adaptation of a King work (The Tommyknockers, for example) rather than mess with one of the best.
Stephen King’s IT (1990)
Starring: Harry Anderson, Dennis Christopher, Richard Masur, Annette O’Toole, Tim Reid, John Ritter, Richard Thomas, Tim Curry, Jonathan Brandis, Seth Green
Director: Tommy Lee Wallace
Writers: Lawrence D. Cohen (Teleplay Pt. I & II) Tommy Lee Wallace (Teleplay Pt. II), Stephen King (novel)
Studio: Warner Brothers Television
Rated: Not Rated

One thought on “Everything You Ever Were Afraid Of: Stephen King's IT (1990)”