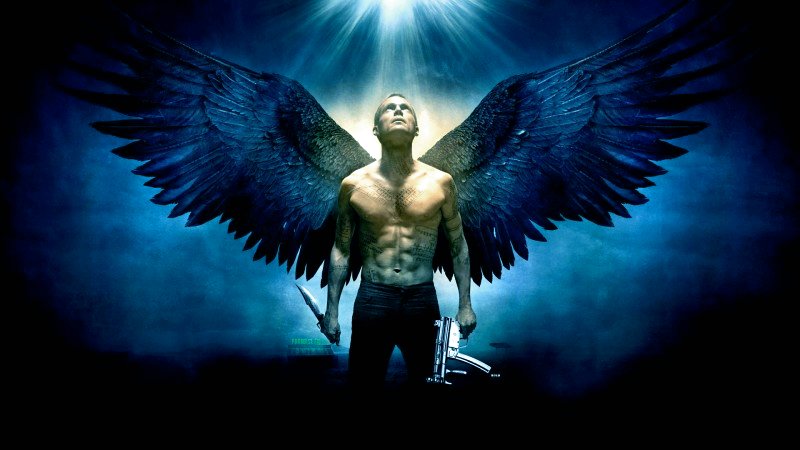 So JARVIS shows up at a desert diner populated by Private Practice’s Addison, Supernatural’s Jessica Moore, NCIS: New Orlean’s LaSalle, Roc, Remy McSwain, and more. Waiting for the punchline? Well, keep waiting. This diner is serving up blood, guts, and violence, but is few on the laughs.
If you’ve turned on a television within the last decade, you’re going to recognize 90% of the cast featured in 2010’s apocalyptic angel melee, Legion. While it is admittedly easy to get distracted in the first ten minutes by the sheer number of familiar faces, it also does well to keep the viewer seated and involved, simply by forcing them to wonder who will pop up next. Running the gamut from the 2000’s television darlings (Lucas Black, Adrianne Palicki, Kate Walsh, Jon Tenney), to film favorites (Dennis Quaid, Paul Bettany, Charles S. Dutton), and even the rare model turned musician turned successful actor (Tyrese Gibson), Legion carries with it a sort of something-for-everyone ensemble cast, but it is only after every character is introduced that the real meat of the story comes to life.

Wicked ink for an angel, amirite?!

Bob Hanson (Quaid) runs a dusty diner in the middle of nowhere with his son, Jeep (Black), serving as mechanic for wayward passersby, and heavily pregnant Charlie (Palicki) waiting tables and sneaking smokes out back. A wealthy couple and their troubled daughter spend their time waiting out a broken down BMW and a man on his way to a custody hearing stops in, just as an elderly woman shuffles in for an early lunch of a rare steak and water, setting the stage for a standoff between the last of mankind and a legion of angels sent by an angry god to destroy mankind for all time. 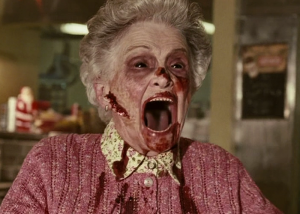 Why Grandmother, what black eyes you have!

The film features some top notch effects and gore, from fallen angel Michael (Bettany) sewing up wounds from where he had sliced off his own wings to our neck-munching granny crawling on the ceiling before descending on poor Mr. Howard (Tenney) and chomping out a mouthful of jugular. Long-time fan favorite Doug Jones has a wonderful cameo as a possessed ice cream vendor sprouting Stretch Armstrong limbs and clambering about the dusty ground in a delightfully grotesque manner. 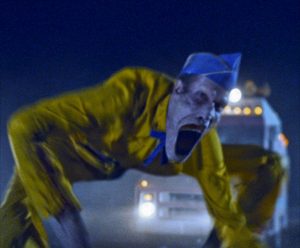 The scariest part of this is how little CGI they actually needed to use.

While Legion features some angelic apocalyptic fun and delivers on a decent number of shocks and scares, it does seem to press too much information into far too short of a time span. Heavy Biblical themes draped over extreme violence and plagues with little background leads to a frustrating amount of unanswered questions. Paired with a clunky and (hopefully) unintentional anti-choice theme, in spite of all of the thrills and chills provided, viewers may be left with more frowns than anything else.
Charlie and her unborn child take a central role in the film, with the archangel Michael making it clear his first priority is to protect her before and during the birth of the baby. An unborn child taking a feature role in a film is nothing new, especially in horror themed films, but it is not often that the expectant mother not only professes to not wanting the child, but to having both considered and made an attempt to procure an abortion, and refuse to hold the newborn. As Charlie tells it, she was overcome with a sense of darkness and couldn’t go through with the procedure. Michael later tells her of the child, “He will lead the way.” 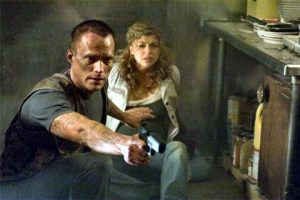 It is far too easy for anti-choice supporters to seize upon such a theme to further their propaganda, and such things just don’t belong in a horror movie. Film itself as a medium can be an escape for the viewer, more so in science fiction, fantasy, and horror genres, where the battle between good and evil is fought in open view, the hero most often saving the day. While horror can make political statements from time to time (if completely unintentional – we’re looking at you, Night of the Living Dead), is the abortion debate really something we want central to our apocalypse?
I didn’t think so.
Overall, Legion is a mostly fun film lacking only in its mishandling of information, ranging from way too much at times to not nearly enough, and ending on an open note that hints at a sequel that never came. There’s more story to tell here, and it might have come to light if the film hadn’t been so bogged down with early over-exposition and a need to cram in as much twisted Biblical lore as possible.
Legion (2010)
Stars: Paul Bettany, Dennis Quaid, Adrianne Palicki, Lucas Black, Kate Walsh, and many more
Director: Scott Stewart
Writer: Peter Schink, Scott Stewart
In Author: dew by
amanda
/
Share: