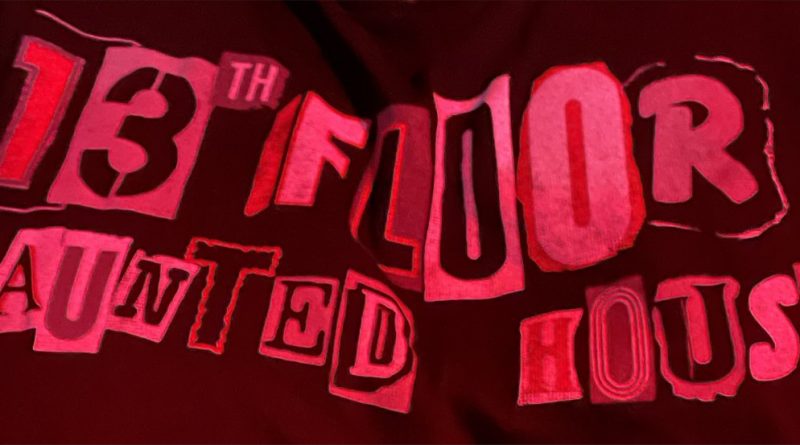 When the office door opens at 13th Floor, you might want to duck and cover; there’s a reasonable possibility that a round Nerf dart is about to come flying your way. Though it may seem a bit silly, this is just one of many little things that made working at a local haunted house one of the most fun jobs you could ever find.

As summer gives way to fall each year, seasonal haunts begin to open their doors and beckon the masses inside for guaranteed thrills and chills to get them in the mood for Halloween. Though many are simple affairs run by local park districts and even schools, full of volunteers in grease paint and cheap masks, there are still among them standout scare factories run by professionals, with actors, costumes, make up, and special effects to rival any horror movie that might grace your screen. In the Chicago area, one of the very best is 13th Floor, located just outside of the city in the suburb of Schiller Park.

With a scare show rivaling even those put on by theme parks each year, 13th Floor Chicago is a large immersive experience that takes guests through several themed areas full of blood, gore, and frightening figures ready to give you the best scare of your life. Ranging from gruesome hospital scenes with mad doctors and mangled patients to ghostly churches full of veiled figures ready to strike, 13th Floor finds a way to play on every common fear and to do so with style and flourish. The dedicated actors cackle and cavort, sending chills down the spine of every guest as they make their way through the expansive haunt – which can take more than a half hour to navigate!

Outside of the haunt itself, the employees are a varied bunch. Some are college students, picking up seasonal work. Some, like me, are those looking to earn a little extra money to make ends meet when their full-time job just isn’t stretching quite as far as it used to. There are retired former cops taking on security roles right alongside those who work full-time for the haunt’s parent company, Thirteenth Floor Entertainment Group. What ties the group together is a clear love for the work they are doing.

Take Erika, the Assistant General Manager for 13th Floor Chicago. By day, she works in real estate, part of a property management group in a nearby suburb. By night, she runs the show: it is her voice calling over the radios, giving a countdown to the moment the haunt opens and ordering actors and staff alike to their places. Some nights, when the crowds are slower, she even dons a costume to join the actors in doling out their nightly screams. There are many people out there who might vie for her position, but few who would find the time or inclination to join in on all of the spooky fun.

Then there’s Heather, a makeup artist by trade who doubles in box office ticket sales after preparing the scare actors for their nightly haunting. She hones her craft for the love of it, and takes on a retail role for the practicality of a larger paycheck. 13th Floor is a stepping stone for Heather; she has worked on film sets as a contractor before, and is hoping to soon become part of the Make-Up Artists & Hair Stylists Guild. What better way to get on the job experience than working to create frightening faces each night?

Of course, 13th Floor is more than just a haunted house. The walkthrough lasts longer than most, with several distinct areas within the haunt itself, each patterned to elicit more and more screams as gleeful crowds make their way through. The haunt itself is prefaced by the Midway, an open area outdoors that houses the queues. To keep customers happy during the sometimes hours-long wait to enter, local food trucks serve up chili dogs and mac and cheese alongside a miniature tiki bar, courtesy of Hala Kahiki, a Chicagoland institution featuring bottled cocktails with a tropical twist.

As revelers wait their turn, scare actors emerge from the haunt to make the experience all the better. Patches, a chimp-faced character in clown make-up, sneaks up on customers by gliding in on sparking knee pads and clapping his oversized cymbals together, often to shrieks of fear and delight. Mr. Hollows, a dapper, pallid-faced ghoul in a frock coat and top hat, saunters up quietly, spooking those who turn to suddenly find him at their side. If you’re not careful, you may be caught off guard by the Dark Mother, who twirls and floats along in her flowing black dress, speaking only in creaking gasps and screams. When the wait is long, there are cornhole boards set up – bean bag toss games, for those not in the Midwest – to pass the time.

General Manager Bryan has an eye to the future, with much more planned for the Midway and for the haunt in general. Visions of carnival games and booths are on the drawing board for the future, with arcade games and even an ax-throwing attraction indoors. Guests already find themselves exiting into a lobby that features three five-minute long mini-escape rooms themed after Dracula’s Crypt, Frankenstein’s Laboratory, and the Mummy’s Tomb, varying in difficulty from the simple to the extremely puzzling. There is also a well-stocked gift shop, full of hoodie sweatshirts, t-shirts, pumpkin onesies, home decor and accessory items, and even Lego-style mini-figures of all of the best slasher icons.

Truth be told, the staff – from outdoor queue managers to retail staff to scare actors – make up a wide portion of the clientele. This is just one of the things that binds 13th Floor together not just as a job or a haunted house, but also as a community: there is an enduring love for horror among all of us. Sure, we all wear a 13th Floor branded shirt or hoodie to work each day, but it is often paired with clothing featuring horror villains or water bottles emblazoned with stickers of much the same, and even prominent horror themed tattoos. We’re there because we want or need the work, true, but it’s an environment well-suited to our personal tastes. Horror fans make the best haunters! Even employee restrooms are marked for Monsters and Ghouls!

Of course, life at a haunted house isn’t always perfect. Any job that brings employees into close contact with the public can have its hazards, but it’s having management that always has the staff’s back that makes the difference. Scare actors are often casualties of rambunctious guests who, acting out in fear, may slap or even punch at them; worse still are those who arrive looking to cause trouble, attacking actors for their own amusement or breaking scenery just for laughs. Thanks to a dedicated security team, such customers are quickly ejected, and the actors still come back every night to do it all over again.

Ticket sellers (like myself) often bear the brunt of angry guests who don’t want to pay taxes and fees on their admissions, or who pre-purchase tickets for specific dates and times and either show up too early or too late. With strict rules in place, we often find ourselves butting heads with those who want to pay general admission prices when tickets have sold out and only expedited entries are available, or those who missed their ticketed date entirely and are demanding refunds or upgrades for their trouble. Box office manager Jeannie stands behind her staff, quick to arrive to alleviate situations as best she can but also standing firm with the company’s rules and regulations, backing up staff who have already told restless guests time and again what options they have to fix their problem. It gives staff a boost of confidence, knowing that Jeannie will not bow to customer anger and will defend her people. It’s always nice to know that management is in your corner!

On one particular evening, a gentleman came to merchandise staff in search of a missing phone as the night’s show was ending. When he became belligerent, using coarse language to abuse staff over his own folly, Erika didn’t hesitate to step up; she wouldn’t allow staff to be berated and, when the man became even more threatening, stood toe to toe and would not take his abuse. The police had to be called; in the end, the missing phone was never in the haunt at all, and it was a case of one angry customer jumping to conclusions. It was just another instance of management doing all that they could to keep their staff safe.

In the end, what really made the job worthwhile was the sense of community that came with working a seasonal job with a varied group of coworkers from all walks of life. We laugh together, complain about the cold together, enjoy the ever-present piles of Halloween candy together, and talk each other out of (or into!) buying that extra t-shirt, winter scarf, or novelty air freshener. When was the last time you worked anywhere where everyone you saw each day made you smile?

I’d worked retail before, and it could be a miserable experience (looking real hard at you, Disney World) at times; arriving at 13th Floor each evening has been a pleasure, whether it be watching fellow ticket seller Yesi jump and startle during her first walkthrough of the haunt, discussing the amazing sights in Salem, MA as Jeannie returns from her first trip to the historic town, or just chuckling at posturing guest insisting that they can’t be frightened when we hear them shrieking almost immediately as they enter – or even just when they turn around and find Patches waiting for them on the Midway!

I had a lot of fun working this season at 13th Floor and am sad to see it ending. Today marks the last night for the 2022 Halloween season with a special “Black Out” event, where guests will have to navigate the haunt with all its frights in pitch darkness, nothing more than a glowstick to light their way. We’d love for you to come out to see us – and love to have you back next year!