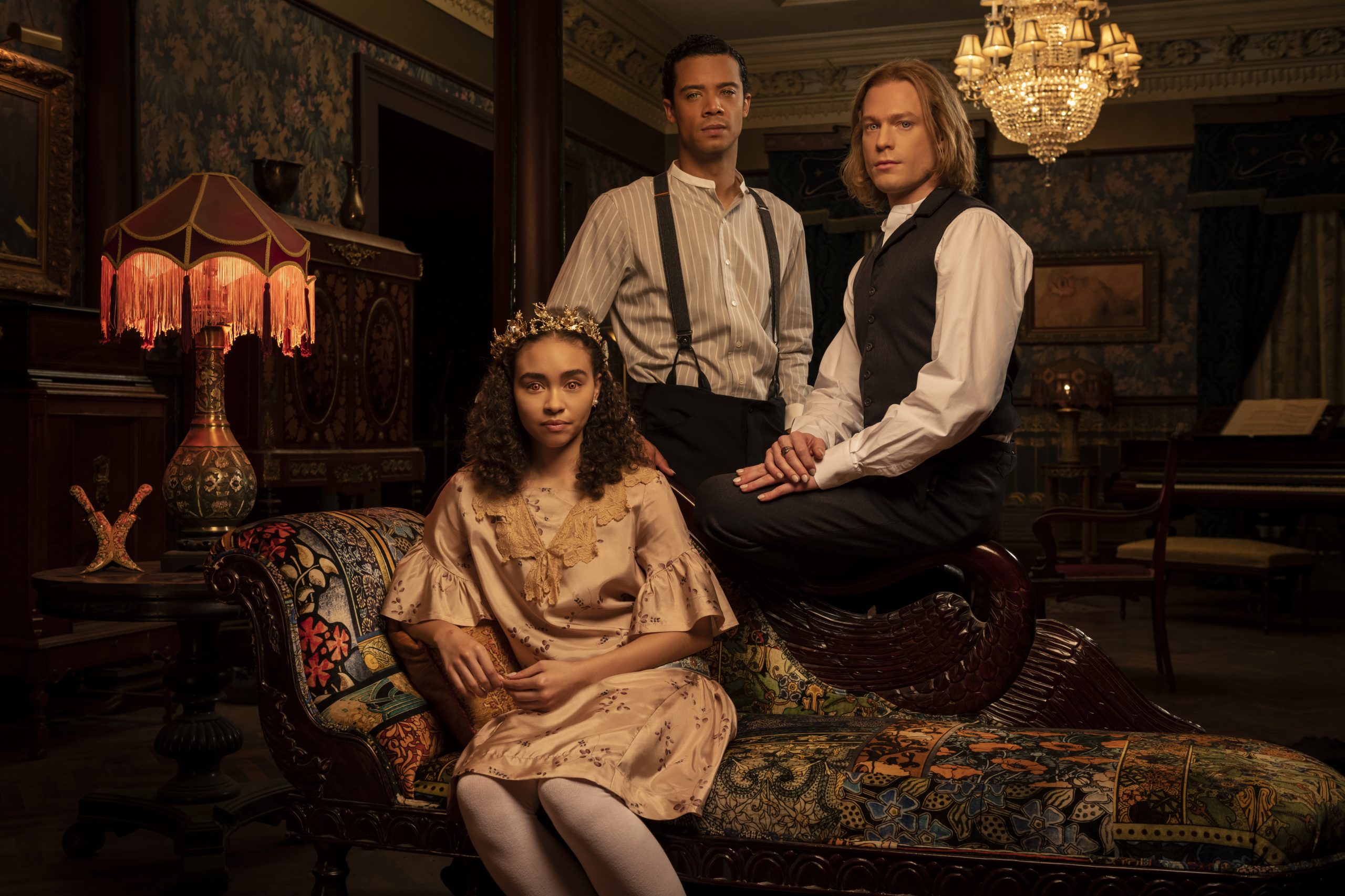 AMC is taking a big swing trying to bring Interview With The Vampire to the screen. It’s an ambitious project to take a universe that is as beloved as The Vampire Chronicles is and successfully bring it to the screen.

As a fan who has read almost every book that Anne wrote and was not a big fan of the 1994 film I said from the beginning that AMC would either get this very right, or very wrong. No middle ground.

They got it right. They created a complex, lush, hypnotic, dark, sensuous world that effortlessly blends modern day with the past. They managed to modernize the story without sacrificing the timeless themes that have captured the imagination of readers for decades.

Embracing A New Version Of An Old Story

Before getting into anything else it’s necessary to talk about the modern elements that have been added to bring this story into the present and set up this adaptation. It would be impossible for this new tale to move forward without addressing the 1994 film.

Without giving too much away Interview With The Vampire is in a way retconning the events of the 1994 film. Louis de Point du Lac contacts journalist Daniel Malloy, now considerably older and not in great health, and wants him to come to Louis’ home in Dubai for another interview.

Louis admits the tale he told Daniel all those years ago was basically a romanticization of the actual story. Now he wants the real tale to be told and has invited Daniel there to hear the true story.

Louis’ motivation for telling the real story now will become clear over the course of the season. But as always there is more to what’s going on than is immediately revealed. The show manages to capture one of the most engaging aspects of Anne Rice’s books which is the reveal of layer after layer of complexity in character and overall story.

Once you accept the major shift in the origin story it’s very easy to become immersed in the world that AMC has created.

One of the things that the show absolutely had to nail was the sumptuousness and sensuousness of this universe. And they did.

Opulence balanced against grittiness is as central to this world as is the balance of dark and light, black and white, and life and death. The dualities that are intrinsic to the story are well-represented in the show in a way that the movie just couldn’t match.

This is a story that needed to be told in this serial format where it’s possible to take the time to develop and reveal the complexity of each character and their relationships with each other.

The small change to the story which starts it off in the 1910s in New Orleans is something that allows them to quickly bring viewers into the world and immerse them in the world they’ve created.

With swoon-worthy costumes, a mix of real and recreated sets, and a little New Orleans scenery magic from the very beginning this is a world you want to be in.

I didn’t like the casting of the 1994 Interview film. I thought that Tom Cruise’s Lestat was not refined enough or elegant enough to capture the nature of Lestat the way he was written. He had the savagery, but not the self-control. Sam Reid is impeccable as Lestat.

He has the right mix of preternatural beauty and “otherness” and charm. Sam Reid can turn from reserved and detached to thundering fury on a dime. He can be emotional and loving and then absolutely savage.

Sometimes he’s spoiled, narcissistic, and petty and then he will be selfless and sacrificing and romantic. The way Sam Reid embodies Lestat is the way I always wanted to see him brought to life.

Jacob Anderson’s ability to emote subtly won’t be a surprise to anyone who watched him in Game of Thrones. But he is able to give Louis a hard edge that was missing in Brad Pitt’s portrayal of Louis.

Modern day Louis as brought to life by Jacob Anderson talks in a measured and precise way even when voicing his regret and sorrow about the past. His ennui is palpable but never crosses the line to pathetic or whining.

He’s careful and reserved but at the same time it’s clear he feels very deeply. It’s easy to see why Lestat was fascinated by him from the start.

The other very important person in this first season is Claudia, who is also ideally cast. Bailey Bass wonderfully captures the euphoria, confusion, and other strong emotions that Claudia experiences while all the time managing to looks stunning in gorgeous period costumes.

AMC’s Interview With The Vampire isn’t all flash and pageantry though. The core of the story is still the relationships.

One of the most resonant features of Anne Rice’s novels are the timeless themes that she uses these characters to explore. An authentic life, a good death. The role of faith, the dream of religious absolution, the weight of immortality, and the unapologetic exploration of the darker parts of human nature.

If you are looking for a throw away superficial vampire series, Interview With The Vampire isn’t the series for you.

In the first episode when the Pont du Lacs are sitting at breakfast listen for a reference to the Mayfair witches. Its a fun nod to the upcoming series following the Mayfair saga.

There are mentions of other vampires and hints that the series will be exploring other stories within the Vampire Chronicles. I hope that’s the case, because I really want to see some of those stories intertwined with the original story. There’s a maturity and depth to the series that the film could never reach. I know that’s because of the constraints of trying to tell these complex and dark stories in just one film. But it always felt like something was missing from the film. Nothing is missing from the series.

Interview With The Vampire Is The Start Of Something Great

AMC has invested a lot into building a universe based on the novels of Anne Rice. It’s very clear that they’re planning on taking viewers deep into the vampire world she created. Based on the first few episodes of Interview With The Vampire I’m ready to immerse myself in the incredibly dark, lush, complicated, ornate, and bloody world they have crafted. I’ll be live tweeting episodes, posting previews before new episodes, and talking to the cast as the season goes forward so follow me on Twitter and join me for live Tweeting on Sunday nights and updates!

One thought on “Review: AMC’s Interview With the Vampire”