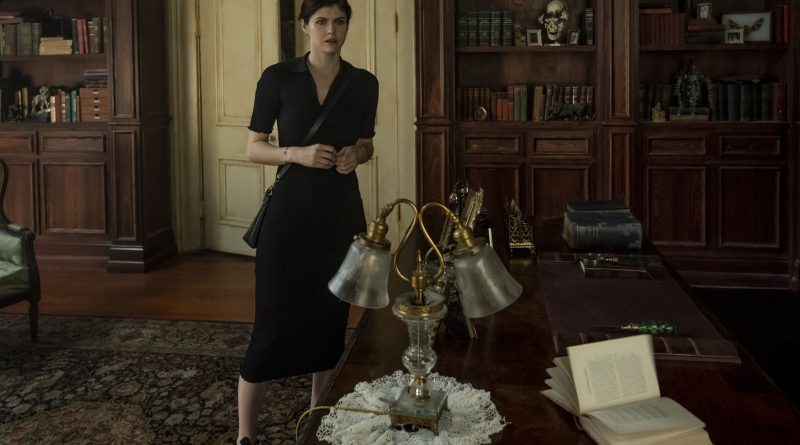 Like many of you I was very excited to find out that AMC was going to be bringing the Mayfair witches to the screen. The Witching Hour and its sequels are some of my favorite Anne Rice books. And after seeing the fantastic job that AMC did interpreting Interview With The Vampire I was hopeful they’d be able to do the same for the Mayfair witches saga.

But Mayfair Witches is an entirely different type of story, so the two adaptations really aren’t comparable. While IWTV has a narrow focus and a prebuilt story arc with Mayfair Witches it’s necessary to build an entire world from scratch. Two worlds, really. Rowan’s modern-day world and the centuries old world of the matrilinear Mayfair family. So the pace of the show is a bit slow over the first few episodes as it sets the scenes for what’s coming.

Without giving too much away there are some things that the Mayfair Witches gets exactly right, like the opening credits. The visuals are eerie and beautiful with a vintage inspired color palette and style. Pay close attention because there are some clues in those credits. And the opening theme is a slightly off balance otherworldly composition that signals you’re about to enter a totally new world.

Just like the stunning sets in IWTV the Mayfair House and the New Orleans scenes are exactly what you’d imagine if you have read the books. The imposing but slowly decaying Mayfair home has just enough disquieting shadows to make you wonder if you are seeing something out of the corner of your eye in every scene in and around the home.  The New Orleans sequences embody the spirit of Southern Gothic: you can practically feel the humidity and smell the lush, slightly overgrown bougainvillea but there’s always an eerie atmosphere in the air that keeps viewers, and Rowan, slightly off balance.

Anne Rice’s Mayfair Witches goes all in embracing the dark undercurrent of witchcraft, magic, and connection to the dead that is part of the fabric of New Orleans. But book fans should know there are some big deviations from the source material.

Mayfair Witches Deviations From The Books

The biggest deviation from the books is that two major characters are missing. This has already been discussed by cast in interviews so it’s not a spoiler to reveal that neither Michael Curry or Aaron Lightner appear in the series. These characters have been combined into the character of Ciprien Grieve.

Ciprien is the Talamasca agent assigned to Rowan’s case. He breaks orders and makes contact with her to help her understand what is happening to her. Ciprien is both Rowan’s moral compass and her guide into the dark Mayfair family history.

Cortland Mayfair is also a bit different in the show than he is in the books. Cortland, who is delightfully played by Harry Hamlin, is a bit of a Greek chorus character who fills in backstories and is the keeper of much of the family lore. He doles out tidbits about that lore when he thinks it’s appropriate. It’s very clear Cortland knows a lot more than he lets on but he is content to sit back and let events unfold rather than actively getting involved.

Anne Rice’s Mayfair Witches is a true Southern Gothic horror tale. That means it’s got a slower build and a longer burn than some other series. If you’re expecting the fire and drama of Interview With The Vampire you will be disappointed. Mayfair Witches is a serpentine tale that takes time to build. As the story unfolds the episodes get darker. The otherworldly sense that permeates the Mayfair house will seep into your consciousness and stick with you.

This is not a series that everyone will appreciate. Purists may not be able to handle the changes that the series has made.  Even though there are big deviations from the original books the spirit of the source material is very much there. Think of this story as “inspired by” The Witching Hour rather than a faithful retelling of the Mayfair story. But it’s a lusciously dark gothic horror with compelling characters, a gorgeous aesthetic, and a rich and complex story.

Don’t miss the premiere of Anne Rice’s Mayfair Witches “The Witching Hour” on AMC and AMC+ at 9 PM on Sunday, January 8th. Join me on Twitter to live tweet reactions and more during the episode.