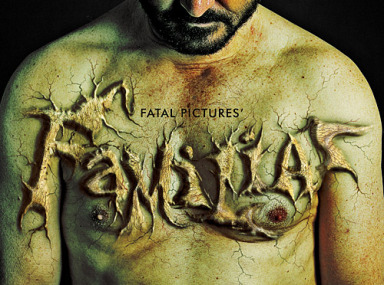 Time and time again, I am overwhelmed by the ingenious ideas that are developed into short films. In a world where it seems that every film idea has already been done before, I still find myself stumbling across something that is fresh and new.  These ideas are constructed by ordinary people with exceptional talent and Familiar is definitely a prime example of this. It is the third short by a production company called Fatal Pictures, founded by Zach Green and Richard Powell, who are dedicated to producing genre films.  Familiar centres around a middle-aged man named John Dodd (Robert Nolan). He provides a non-diagetic monologue for the film, allowing the audience to see what’s going on inside his mind.

The opening of the film is  a variety of mundane, every day situations, and we are introduced to John’s family during this time.  It is apparent that John is growing tired of the same old routine, and wants more to life than just work and family. For the first half of the film, the pace is rather slow, but I found that this was incredibly effective as it reflects the repetitive and boring nature of John’s life. To keep the audience’s interest, writer/director Richard Powell has created one main enigma in the first few minutes of the film, where John’s monologue explains that he has “an opportunity” and that after forty-five years, his life is “about to begin”. It is an incredibly optimistic thought, that soon spirals out of control.

Familiar‘s use of sound benefits the narrative greatly. Out of all the cinematography, I felt that sound stood out the most. John’s monologue is generally quite monotonous and soft, yet it is delivered in a way that makes loving father/husband figure sound rather sinister. In addition, I thought the use of silence in the film worked incredibly well, as it showed just how little John had to say about his current life. There was nothing for him and his family to discuss, and instead, the monologue discusses it for him. An interesting factor about this film is the lack of diegetic speech between the three characters, most of the dialogue is just John. Every aspect of the film has clearly taken a lot of time, and it has paid off. The script is well written, and some of the actions and words that take place are incredibly sinister, though it is done in a subtle and artistic manner. In fact, it’s so subtle that you really have to pay attention to the events on-screen. The gore is minimalistic and only occurs in one scene, yet the special effects are enough to make your skin crawl.

This film is unique in its own right. It twists the conventions of other films, and has created something brilliant. Familiar feels like a feature-length film, even though it only has a run time of twenty-three minutes. The pace speeds up until the final scene, and you’ll be left stunned when it ends. As a consequence, Familiar is one of those  films that you will think about for a long time after you’ve watched it.