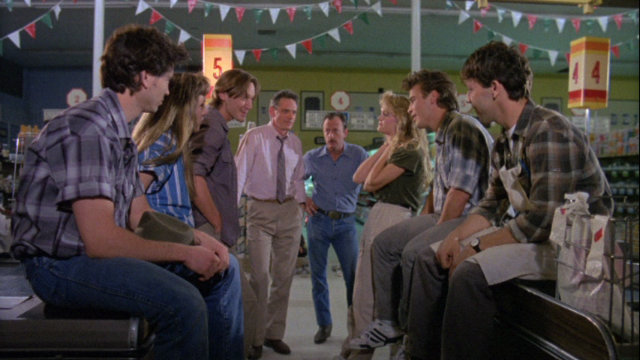 After the success of Sam Raimi’s Evil Dead II, it was going to take five years before the follow-up (and the greatest movie ever made), Army of Darkness, would see release. In that time period, Raimi made a pretty good superhero movie (Darkman), Bruce Campbell appeared in some expectedly-schlocky horror movies (Waxwork II, Maniac Cop, Moontrap, etc.), and writer Scott Spiegel decided to take the reigns on his own horror movie, with an even lower budget than the two Evil Dead movies!

The night crew at Walnut Lake Supermarket is having a bad night. First, the disgruntled ex-boyfriend of employee Jennifer (Elizabeth Cox) causes a commotion by harassing Jennifer, beating up other employees, and escaping with the lingering possibility he could still be in the area. Then they discover that Walnut Lake Supermarket is closing down for good in a short while, and they will all lose their jobs. Finally, an unseen maniac begins killing off the night crew one by one in creative and spectacularly gory ways. Can he be stopped, and who will clock-out…alive?

I watched Intruder a couple years ago, and, to be frank, I wasn’t impressed. I watched it again a little while later, and still didn’t really appreciate. Then, after recently watching Synapse’s new Blu-Ray of the movie, I found that I really dig this movie! I don’t know what I was expecting before, but this is a great example of a slasher that, instead of trying to do something new, goes with the traditional formula and has fun with it. In fact, about half way through, I realized that when I make my slasher opus (the day will come!), it will probably look something a lot like this. Subtly humorous dialogue, hilarious visual gags, buckets of blood, creative deaths, and likable characters. It’s not flawless, but it definitely provides the goods.

The overall effect of Intruder is greatly helped by its cast. Elizabeth Cox makes for one of the best (and most underrated) scream queens of the decade, and she does do a lot of screaming! Renee Estevez has a small role as well, and the brothers Raimi (Sam & Ted) pop up as entertaining cannon fodder. Dan Hicks from Evil Dead II is really good and very likable as the storeowner, and Burr Steers (who played Roger in Pulp Fiction) comes very close to stealing the show as Bub, the stereotypical stoner dude who gets one of the best deaths in the movie and one of the best lines (“I swear to God, if my brother hadn’t hit him repeatedly on the head with a blender he would have killed me!”). Heck, the man himself, Bruce Campbell, has a quick cameo at the end of the movie! Everyone else does a fine job alongside them, even if there weren’t any other standouts. Another notable element of the movie is the abundance of inventive camera techniques and angles This includes several point-of-view shots of inanimate objects, like a telephone POV, shopping cart POV, trash can POV, doorknob POV, etc. While all those could have been annoying, the way they’re pulled off and their place in the movie just adds to the fun.

Of course, the big draw to Intruder is the notorious gore effects, done by the Academy Award-winning group, KNB Effects. Aside from a few instances when a head is noticeably fake, they’re all fantastic! Spiegel perfectly utilizes the grocery store setting by killing everybody off in ways befitting it: death by meat hook, butcher’s knife, hydraulic garbage disposal, and in the graphic highlight of the movie, an incredible death by bandsaw! Even some of the most boring kills always have some sort of added extra to them that make them great, like a guy getting stabbed with a knife that goes through and then punctures a pack of beer behind him, causing a fountain of blood and booze to erupt! Surprisingly, there’s no nudity on display, but this movie is so fun, you won’t even notice! However, the identity of the killer is rather easy to deduce, but I must say, when the it is revealed who the culprit is, the actor playing the guilty party does a phenomenal job of acting utterly bonkers in what has to be one of the best (and enjoyably over-the-top) “crazy” performances of the decade!

However, the one problem with Intruder is that it is so paint-by-the-numbers. Of course, Spiegel paints those numbers like a Monster addict, but it’s one of those movies where you can pretty much guess how the entire movie will go within the first twenty minutes. The ending does defy the traditional slasher conclusion somewhat, but like The Dorm that Dripped Blood, an unexpected ending does not make a slasher original. Another thing that isn’t really a problem more than a minor complaint is the music. On their shoestring budget, they probably couldn’t afford to hire a original composer, so they just used stock music. It’s not too terrible, but an original score would have been waymore effective. Although the music Ted Raimi is constantly listening to is quite catchy.

Intruder doesn’t reinvent the slasher subgenre, nor does it try to. It’s as straightforward as they come, but Spiegel’s clever directing and wry humor, along with some outstanding grue, elevate it to near-classic standards. The Easter egg-riddled cast, resourceful and likable final girl, great final chase, ingenious camera shots, and a killer who’s had one too many Red Bulls also contribute heavily to the movie’s overall success. Synapse released this on a Blu-Ray/DVD combo pack back in 2011, and it’s definitely the way to go when watching it. The transfer looks great, and is definitely a step-up from the Wizard Entertainment DVD that was released a while ago. It also comes with a heap of great bonus features, including a fun and insightful audio commentary provided by Spiegel and producer Lawrence Bender (who also produced a majority of Tarantino’s films; Tarantino has stated his love for Intruder a few times in the past), a making-of including nearly everyone involved in this movie, cast auditions, extended gore scenes, clips from Night Crew (the original short film that led to the making of this), a featurette on how the film was butchered when it got released onto home video a still gallery, and some trailers that spoil who the film’s killer is. It’s a release definitely worthy of your money. As a side note, I included the DVD art for this review only because it (as well as the Blu-Ray) is the only art that doesn’t spoil who the killer is. So please, don’t look it up.
Intruder is a modest, low-budget gorefest that embraces everything that makes these movies so entertaining and throws in its own brand of charm for good measure.