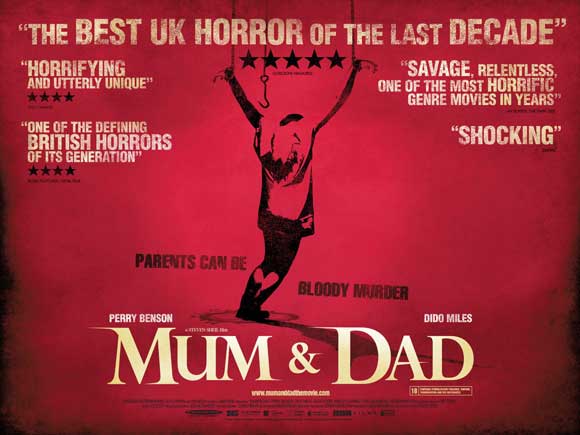 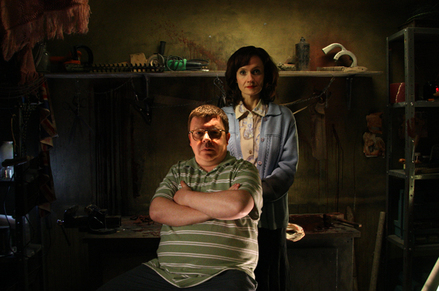 I love watching British horror films and frequently sing their praises, as I’m proud of the films that are crafted on home turf. However, this film did not fully live up to my expectations.  Mum & Dad is the first feature-length film by writer/director Steven Sheil, independently made in the UK. These factors must be taken into consideration whilst watching this film. You aren’t watching a Hollywood blockbuster here, it’s very independent with limited special effects.
The film begins with a young Polish cleaner named Lena (Olga Fedori) doing the rounds at the local airport. She soon ‘befriends’ another cleaner who introduces herself as “Birdie” (Ainsley Howard). The two of them get to know each other a little bit, where she meets “Birdie’s” brother Elbie (Toby Alexander), who never speaks a word throughout the entire film. After declining the offer of a drink, Lena misses her bus by a few milliseconds, and doesn’t even attempt to run after it. I felt that this was incredibly unconvincing, as the bus had pulled away right in front of Lena. She could have easily ran toward the bus instead of just standing there. “Birdie” discourages Lena from getting a taxi, and offers to let her stay over at her place.
Anybody with an ounce of common sense would say no, especially if you’ve only just met the person. I’m sure Lena is smart enough to be aware of the concept of “Stranger Danger”, yet Lena agrees to stay with two people she barely knows. I found this opening to be a bit of a let down. Better acting may have improved this slightly, which is a shame.
When Lena arrives at the house belonging to the two strangers, she realises things aren’t as they seem (surprise surprise). Shortly after arriving, she is drugged by “Dad” (Perry Benson), and she wakes up chained to a bed, being watched by an overweight, unattractive male covered in blood, and a skinny, frail looking woman. At first “Mum” (Dido Miles) comes across as being quite soothing, which is incredibly eerie, and tells Lena that she shouldn’t struggle because “Dad” will get ‘excited’. Both parent characters are incredibly unsettling, which is something that I definitely liked about this film. I especially liked the characterisation of “Mum”, because at times she can be almost loving, which can change in the blink of an eye.
Although the plotline is very predictable, there were a few scenes that really stood out for me. The main one being where Lena is being tortured by “Mum”, and “Birdie” brings her tea and biscuits, perfectly aware about what she’s doing to Lena. This scene was chilling, as this is clearly normal life for the ‘family’, so viewing this normality as an outsider is disturbing. You feel as if you’re part of the scene, and you really don’t want to be.
I don’t discourage anybody from watching this film, but it’s nothing spectacular. There are a few gross-out scenes, but they’re very mild compared to other ‘torture porn’ films. The pace of the film is rather slow, and the ending is also a bit of a let down, but the parent characters definitely redeem the film. If they’d had a better budget or even just a better script, I think the film could have been so much better.
“Mum & Dad” (2008)
Starring: Perry Benson, Dido Miles, Olga Fedori
Director: Steven Sheil
Writer(s): Steven Sheil