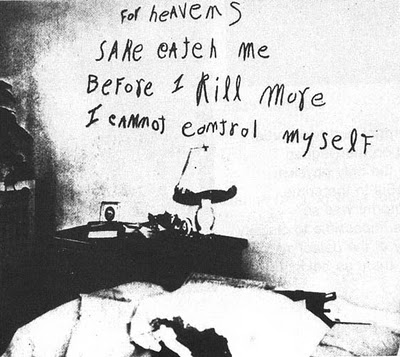 WARNING: This article contains images and descriptions of real crimes and crime scenes. Reader discretion is advised.
Horror isn’t always about make-believe monsters. True crime stories have provided the inspiration for dozens of horror movies. Sometimes, the killers who stalk the night are just ordinary people. Sometimes, the killers are real.
In June of 1945, the mutilated body of a middle-aged woman was found in her north Chicago apartment, bearing multiple stab wounds. The woman’s throat had been slashed, and the wounds left there strangely covered over with adhesive tape, as though the killer was trying to erase or repair what he had done. The woman’s dress had been drawn up to cover her face; the only other evidence at the scene was a quantity of dark hairs clutched in the victim’s hand. When all of the usual suspects – former lovers, ex-husbands, current boyfriends and the like – were ruled out as possible perpetrators, it seemed that Josephine Ross’ killer would never be found. With no clear motive, local police assumed that the unlucky woman had interrupted a burglary (in spite of a lack of anything of value having gone missing) and fallen victim to circumstance. With no clear suspect in mind and little evidence to go on, two months after the murder, the case lapsed and was presumed to be unsolvable.

Six months and less than half a mile away from where Josephine Ross was discovered, a second body was found in December of 1945. The circumstance and state of the body were strikingly similar; again, a middle-aged single woman, Frances Brown, was found alone in her apartment, repeatedly stabbed. Her head had been wrapped in her own pajamas, and in addition to multiple stab wounds, she was found to have a bullet wound at the base of her skull. Again, the wounds to her neck were covered over with adhesive tape. No valuables were taken from the scene.
The apartment was left in a state of disarray, with bloody trails leading from the victim’s gore-soaked bed to her bathroom, where she had been found thrown over the bathtub. In spite of the obvious viciousness of the crime, police again first surmised it to be an interrupted burglary. But this time, the killer left behind a message.
Scrawled on the wall in the victim’s own lipstick was the ominous warning: For heaven’s sake catch me before I kill more; I cannot help myself.

The message was terrifying. Was this the promise of more death to come? Suddenly, what had seemed an unfortunate but random incident was beginning to look like something else entirely. Serial murder was not unheard of in 1945, and the macabre spectacle of a message written on the very walls of a victim’s home was enough to set the fears and worries of the public ablaze. When would the so-called “Lipstick Killer” strike again?
In a surprising turn of events, a local butcher, George Carraboni, confessed to the murder of Frances Brown. At the time of his confession, Carraboni was suspect in more than a dozen violent murders in Ohio, and yet, Chicago police were unable to hold him. His confession would never have held up in court, as he never told the same story twice, constantly changing the details and circumstance of his supposed crime.
Three weeks after the Frances Brown killing, a young girl went missing from her family’s home, eight blocks away from the scene of the earlier murder of Josephine Ross. Six-year-old Suzanne Degnan was the daughter of a government official embroiled in a meat packer’s union strike in the city, and her disappearance by way of a ladder propped against her bedroom window was thought at first to be retribution for her father’s role in prolonging the strike. Ransom letters and calls came that never led to any fruition, and notice was sent even to the Chicago city mayor, with the supposed killer referencing Degnan’s father’s role in the union issues as impetus for the kidnapping. 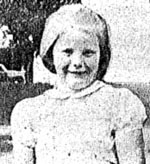 Hope remained high in retrieving the child alive, until an anonymous tip came in to the local police department, suggesting their search be focused on the sewers near the Degnan home. Piece by piece, young Suzanne’s dismembered body was retrieved from the storm drains near her home. A nearby apartment building’s laundry room bore blood evidence that confirmed it as the scene of the young girl’s violent murder.
The leads were numerous and varied. Stories of a man and woman together attempting to abduct children in the area abounded, as well as of the same couple moving about the neighborhood carrying small parcels as they went. Unknown men were seen skulking about the neighborhood at all hours of the night, near to the Degnan home and the apartment laundry murder room. The suspects just kept pouring in, from local eyewitnesses and paranoid government officials involved in the strike scandal. Nearly 400 suspects were questioned, and multiple confessions received from several sources, but still the police claimed no firm lead – until the June 1946 arrest of 17-year-old William Heirens, taken in on a burglary charge and already carrying an impressive rap sheet in spite of his youth.

What happened next has long been subject of controversy. Instances of beatings were alleged against the police force, and there is record of the use of psychotropic drugs and sodium pentothal on Heirens while in custody. The young man was even subjected to a lumbar puncture procedure – a spinal tap – without any form of anesthesia, and immediate interrogated afterwards. It came as no surprise, then, when Heirens began confessing.
But was William Heirens truly the Lipstick Killer?
Handwriting analysis was never able to match Heirens to the ransom notes or the lipstick scrawled message. A previously known bloody smudge from the apartment of Frances Brown suddenly became a usable fingerprint, claimed to match Heirens. A raid on Heirens’ college dorm did not recover anything directly linking him to the murders, only items stolen during a burglary near to where Suzanne Degnan had lived, circumstantial evidence at best. A polygraph test taken by Heirens resulted in a finding of ‘inconclusive’, even after Heirens had begun to recant his confessions. Police claimed Heirens admitted to the existence of an alternate personality, George, who had been in control when Heirens was committing the murders. Sensationalized and widely reported in the media, it was no surprise that, in spite of his recanting, Heirens was found guilty.
Stranger still is the sudden change in victims and modus operandi. Many repeated and eventual serial killers develop strict patterns, with victims of a similar age, build, look, and so on. Even their method of murder is often the same. To move from the stabbing murders of middle-aged women to the strangling and dismemberment of a child is not a pattern in the least; there was nothing to tie the crimes together, save the sudden and somewhat unexpected confession of William Heirens. Theories abound as to the true nature of the murders. Many armchair detectives have even begun linking the unfortunate demise of young Suzanne Degnan with that of Elizabeth Short, the infamous Black Dahlia.
Did Heirens really commit these murders? The answers may never be known.
Heirens never stopped claiming innocence, and later looks into the case make it seem that the young man with an admittedly delinquent youth was railroaded into false confessions, and kept locked up with bureaucratic red tape, despite a later examination of the polygraph results that seemed to point to Heirens’ innocence. The daughter of his supposed first victim Josephine Ross, Mary Jane Blanchard, even went on record to say she believed in Heirens’ innocence. “I cannot believe that young Heirens murdered my mother. He just does not fit into the picture of my mother’s death,” she stated. “I have looked at all the things Heirens stole and there was nothing of my mother’s things among them.”

The story of the Lipstick Murders was sensationalized in the 1956 film, While the City Sleeps.
A 2009 book, “Most Evil: Avenger, Zodiac, and the Further Serial Murders of Dr. George Hill Hodel”, written by the doctor’s son Steve Hodel, an experienced LAPD homicide detective, provides evidence of Dr. Hodel having committed not only the infamous Black Dahlia murder, but also the Lipstick Murders of Chicago and several other violent crimes in California and Manila. While the accuracy of the book is to be debated, it served as another facet of reasonable doubt in the case of William Heirens.
On March 5, 2012, William Heirens died while still a prisoner of the state of Illinois. He is the longest serving inmate on record in the state. He protested his innocence until the day that he died.
Sources:
freewilliamheirens.com
trutv.com/library/crime/serial_killers/predators/heirens/