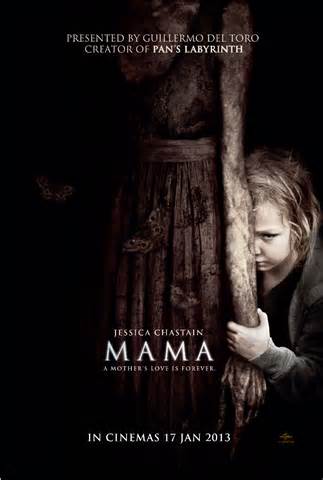 I’m always a bit wary when it comes to horror movies without any “big name” stars in them. The ones I’ve seen generally make me roll my eyes and sometimes they’re so bad I can’t even finish watching the movie. I’m happy to say that despite the fact I didn’t recognize anyone in the cast of Mama, it was an awesome horror movie.  Be warned, there are plot spoilers for the movie ahead.

The movie begins with the news that a man killed two of his co-workers. His young daughters, ages three and one, are in their bedroom, waiting for their mom to take them to a school. A shot is heard and a couple moments later their father appears in the room, and tells the oldest daughter they’re leaving. He carries the youngest one to the car. It’s clear he’s rattled (and who wouldn’t be after committing a triple homicide?) and he’s driving erratically. The car careens off a cliff and they crash into the forest below.
They walk through the woods, miraculously uninjured for the most part, and they come across a cabin. He takes them inside and tries to pull himself together. But he can’t and he pulls out a gun, ready to kill his oldest daughter Victoria with it. Before he can, a presence appears behind him and he’s yanked away from her. When Victoria turns around and calls for her dad, she finds he’s gone, vanished.
The film skips ahead by five years. Lucas, the girls’ uncle, has been spending all his money on trying to find his brother and the girls. It finally pays off, and the girls are located in the cabin. But they’re not the same sweet girls they once were. They are utterly wild, growling and un-groomed and lashing out at anyone who gets near them.

After a brief custody battle with another aunt, Lucas and his girlfriend Annabelle are granted temporary custody of the girls. This is due to an arrangement with the therapist that has been working with them; they must move into a house and he must continue to see him. During hypnotherapy with Victoria, she tells the doctor that “Mama” took care of them. She also says that “Mama” had a baby of her own once. That she escaped from a hospital for “sad people” and that she took her baby and jumped in the river.  The doctor suspects that Victoria has developed a second personality…but as time goes on and Lucas is almost killed by a force in the house, Annabelle is forced to try and take care of the girls on her own. And when more weird things begin happening, it becomes obvious that things aren’t exactly what they seem. 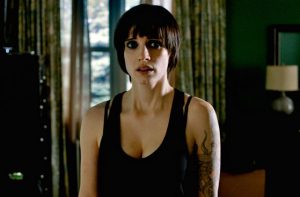 This movie from start to finish was fascinating. The subject matter itself poses the question – what WOULD happen to two very young girls abandoned in the wild if they were to survive? And answers it in a creatively haunting way. I won’t spoil the ending of the movie, but let’s just say that I really liked it and highly recommend it. Big name stars or not.
Have you seen Mama? Want to chat about it? Hit me up on Twitter at @WalkinDeadAngie!
“Mama” (2013)
Starring: Jessica Chastain, Megan Charpentier, and Isabelle Nelisse
Director:  Andres Muschietti
Writers:  Andres Muschietti, Barbara Muschietti, and Neil Cross