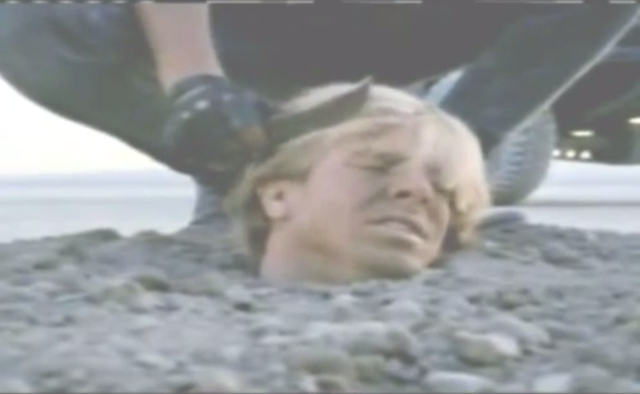 Have you ever encountered a film that you wanted to see really badly but couldn’t get your hands on a copy? I’ve had those experiences a lot over time. Whether the DVD was OOP and fetching collector’s prices, or it was a movie that never got a theatrical release and only existed in the form of torrents, we’ve almost all had that frustrating search and usually when we end up obtaining that movie, our thirst will either be sufficiently quenched or we’ll find that the waters have poisoned. That’s pretty much my story with Mirage. I couldn’t find it anywhere I looked, but at long last, almost a year ago now, I found it. And here are my thoughts.

Three couples head out to the middle of the desert for a little fun in the sun. However, tensions rise as brothers Greg (Kenny Johnson) and Kyle (Todd Caldecott) continually argue since Greg is now dating Chris (Jennifer McAllister), Kyle’s ex. Things do nothing but get worse when a mysterious black truck is spotted and soon, it begins to menace them. The group finds their numbers dwindling as the motor-bound psycho picks them off in gruesome ways. With no chance of escape, the remaining teens must find a way to fight back or die…but what is real and what is a mirage?

The reason Mirage is so obscure is simply because it never got a video release in the US (to my knowledge). New World Video over in the UK and possibly other places did release it. A true pity, because this is one very, very good surprise of a movie! 1990 was a great year for horror that doesn’t get talked about a lot, and Mirage fits comfortably alongside all the other titles released that year. The best way I can describe it would be that this is what would happen if you took Duel, took it off the roads, and replaced Dennis Weaver with a group of teenagers. How perfect is that? Despite being unknown, some names you might recognize are Todd Caldecott (the first male victim in the also underrated Friday the 13th Part VIII: Jason Takes Manhattan), Kenny Johnson (who had small roles in Dexter, Burn Notice, and several other TV shows), and notable stuntwoman Laura Albert (who B-movie fans may recognize from schlocky flicks like Blood Games, The Unnamable, Dr. Caligari, and more). Director William Crain is no stranger to the horror genre with titles like the misunderstood Blacula under his belt along with Dr. Black and Mr. Hyde.

Let’s talk about the vastly underrated setting of the desert in slasher films. There are typically two other slashers that come to mind when I think of desert-based horror (aside from the Drew Barrymore film Far From Home) and each does something great with the desert. Death Valley (1982) makes great use of the tourism aspect, with locations like gold mines and ghost town tourist traps. Blood Frenzy (1987) expertly captures the arid climate of the place (try watching that movie without getting heat stroke). Now, Mirage, which does a great job of setting up how vast and hopeless the desert is. Throughout the movie, we always see these large land formations not too far in the distance, but no matter how far these characters walk, they never seem to reach it. This, when paired with the synth score, the nigh-teleporting killer, and the bright blue sky against the dusty ground, gives it a very surreal vibe.

In technical terms, Mirage is really only an okay movie. The acting isn’t anything special (if anything, it’s not really that good) and cinematography buffs will notice a frequent use of the “running shot” throughout the movie that loses some of its impact as a result of almost-overuse. The pace is nicely handled though, as it consistently manages to not move at a breakneck pace, but it never gets so slow that I would rather be looking down the barrel of a gun than at the screen. The dialogue’s a bit a little stiff and awkward in places, but I felt the characters still came across as likable and there actually is some suspense in the death scenes. Chris, the final girl, is also both likable and resourceful, even though I wish they had built up her character a little more. The film’s ending is also very weak. However, all these are but minor nitpicks that are easily overlooked.

In terms of a slasher movie, Mirage is fantastic! Let’s start with the basics: the kills. They’re great, there’s a good crop of them, and they’re evenly spaced for the entire runtime. Major props also go to the filmmakers for not restraining our killer to just one weapon; over the course of the movie, he uses a knife, a shotgun (one of the few slashers where the killer has the balls to use a firearm), his truck, and even grenades! It’s almost a war movie! Crain doesn’t wuss out on the kills either; all of them are expertly done and very gory. Of course, how can you not love the kill where one unfortunate chap gets buried up to his neck and terrorized? Now what else…oh, you want nudity? You get nudity in the form of Bambi (Laura Albert’s character) who can’t seem to keep her top on (understandable, given they’re in the desert). There aren’t a lot of boobs, but they’re there. The killer himself is pretty creepy. We never see his face until the final twenty minutes where he menaces Chris around some rocks, but his all-black attire, leather gloves, and lack of vocal expression definitely make an impression. When he does turn into a chatterbox at the end, he taunts Chris with great lines like “Don’t let it get you down, everyone has a bad day once in a while!” and “I always wondered how long one of you prom queen bitches would last.” I also must note that the actor playing the killer, who hasn’t done anything else, did a really good over-the-top job in the role.

This might just be the hardcore slasher fanatic in me, but I really loved Mirage. It’s not perfect, but it’s one of the best films from 1990, and that’s a hard thing to do. This is a movie that manages to have a great sense of fun (dig the opening scene of a couple making love in the back of a pick-up truck as a weight presses down on the accelerator and they zoom across the desert, or the football montage) while also being suspenseful when it wants to be. If you’re only sort of a slasher fan, I’d still say give it a look as this is far and away one of the best obscure slashers in existence. But there’s the problem: this hasn’t seen a Stateside VHS or DVD release. I have no idea who owns the rights (perhaps Image, as they own most of New World’s catalogue, so maybe this is in there by default). I’m not even going to expect a DVD release anytime soon as this one doesn’t even have much of a cult following (another sad fact). Maybe it’s because of the amount of blondes in Mirage. That’s it.
The hunt was worth it. Proving that not all early-nineties slasher are bad, Mirage is a fun rollercoaster of entertaining characters, surreal atmosphere, a well-utilized setting, gory deaths, and not to mention great use of a bow and arrow. What’s not to love?
*NOTE*  It’s a bit unfair to tell you about how gory Mirage is and include only mostly-bloodless pictures, so here’s some nice grue for you to feast on:

One thought on “He Just Wants To Be Your Friend: MIRAGE (1990) Review”