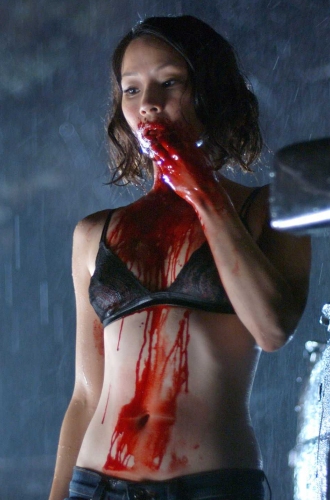 There were a lot of things promised to us as children about the future we would one day experience, particularly of the dawning of the new millennium in the year 2000. Sadly, our flying cars, food replicators and robotic servants have yet to become the standard. On the plus side, we did get a fair amount of decent vampire flicks. 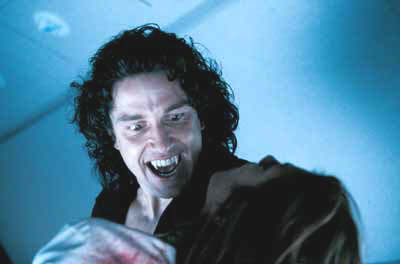 The quickest way to capitalize on the new century is to produce films with the year in the title; Dracula 2000 jumped right in on the idea, bringing the ages old count into a new century – and star Gerard Butler to American cinema audiences. The storyline is simple enough: burglars seeking a locked treasure instead encounter and inadvertently release Count Dracula, who immediately ventures out to seek revenge in modern day New Orleans. Nothing spectacular here, though generally not a bad flick. Notable for appearances by Jeri Ryan and Whedonite favorite Nathan Fillion as, of all things, a priest. Horror film veteran Wes Craven has producer credit.

Films of all kind like to play with the idea that what we are viewing on the big screen isn’t necessarily all scripted play-acting. This same concept is employed in Shadow of the Vampire, a very clever film centered around the filming of one of the earliest vampire films, 1922’s Nosferatu, with the thought that the vampire tale they are seeking portray may not be entirely fiction. Willem Dafoe is all but unrecognizable as the early film’s lead actor, Max Schreck; his performance, combined with the fantastic effects makeup, just about makes the film. The old school cinema atmosphere is heightened with the use of silent film era techniques in the film: playcards and black and white film. With appearances by Dracula film vets Cary Elwes and Udo Kier, as well as frequent Oscar nominee John Malkovich, this film is a definite must-see.

Picking up a hitchhiker rarely leads to anything positive, and this holds very true in The Forsaken, a 2001 vehicle for b-class WB stars Kerr Smith (supporting actor on Dawson’s Creek) and Brendan Fehr (supporting actor on Roswell). When Sean (Smith) stops to pick up hitchhiker Nick (Fehr), he has no idea he’s placing himself center in a bloody drama that had been playing out long before he arrived. Nick, it turns out, is a vampire hunter, and Sean is all too quickly wrapped up in a race against time to save not only his new acquaintance, but himself as well. Other notable names in the film are more less than leading men: Jonathan Schaech and Simon Rex. For the most part, it’s not a bad film, but don’t expect anything mind-blowing. Fans of another WB (now, CW) drama, Supernatural, may recognize some inklings of the popular show in the basic set-up of two moderately attractive young men driving cross country, hunting the things that go bump in the night. 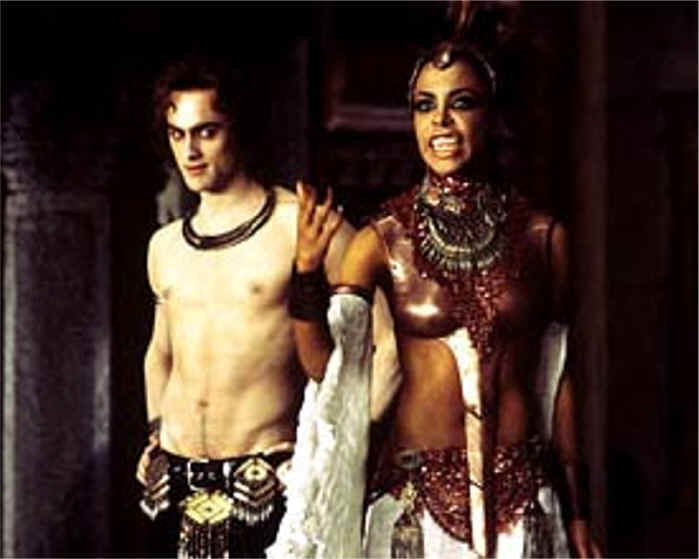 The recipe for this film is as follows: Take three best-selling vampire novels; cut in half and place in blender. Blend on high for two minutes; pour newly made paper mulch into page frames, in no particular order, discarding an interesting bits. Broil on high for five minutes and then serve; watch fans froth in rage. 2002’s Queen of the Damned is a perfect example of what should have been a great film going so very very wrong. Stuart Townsend picks up the fangs where Tom Cruise left off, playing the vampire Lestat even better than his counterpart eight years earlier with the perfect mix of attitude, recklessness and accent. Songstress Aaliyah took on the title role, which would be her second and final film appearance before her untimely death in 2001. Even the soundtrack, written in part by Korn’s Jonathan Davis and performed by a variety of fantastic musicians, ranging from Orgy’s Jay Gordon to Disturbed’s David Draiman, was perfect. And yet this movie was still utter crap, from start to finish. Confusing and disjointed, it could not even be viewed as a standalone apart from the books that inspired it; trying to reconcile it with the novels is even more confusing (and far more aggravating). Sadly, what MIGHT have been is clearly visible in the bare-bones structure of the film and the hints of the performances its stars could have given, had it not been for the terrible adaptation employed in the script. Anne Rice fan or not, this is one film that will leave the viewed saying “Wait… what?”

Imagine, if you will, Shakespeare’s Romeo and Juliet, in the modern era. Now make Juliet a badass vampire played by Kate Beckinsale. This 2003 action-horror film took a new spin on classic vampire and werewolf mythology, portraying the two as opposing factions in an age old war. Beckinsale’s character, Selene, is a Death Dealer, whose purpose is to hunt down and kill Lycans (werewolves). In a twist of fate, Selene becomes transfixed on a human (Scott Speedman) who the Lycans seem to want for some purpose, and wackiness ensues. Fun and quite the visual spectacle, the cinematography is fantastic and definitely worth a watch.

Though Van Helsing is more of an action film vehicle for Hugh Jackman than a real vampire film, it does have its merits. This 2004 film, co-starring Kate Beckinsale (something of an It-girl of the era), presented an interesting take on the origins of both Count Dracula and his eternal enemy, Van Helsing.

Some days, you just want to see somebody get their throat ripped out. Say goodbye to pretty aristocratic vamps and hello to frenzied animalistic bloodsuckers on the prowl! Based on a graphic novel miniseries of the same name, 30 Days of Night expands on the film trope of the locked door and creates an entire town cut off from civilization, waiting for the sun to rise. The only problem is, the town is in Alaska and subject to a month of unending night, making it ripe for the picking for vampires eager to feed. Fun, bloody, but nothing too cerebral. 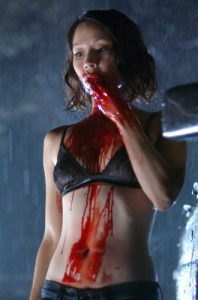 Part noir, part horror; Lucy Liu stars at reporter Sadie Blake who, while working on a series of articles detailing the local goth party scene, suddenly finds herself waking up on a morgue slab, a brand new bloodsucker. Determined to find the vampires that had changed her, Sadie finds herself thrust in the middle of a conflict between warring vampire factions and befriending a policeman searching for his daughter’s killers. Caught this on SyFy and was engrossed by the interesting storyline. This snuck under the radar but is worth the time, in spite of its failings.

A forlorn, bullied little boy. A mysterious little girl and her guardian. The atmosphere of this film is what makes it so spectacular; everything seems heavy and dark, almost as if perpetually moving underwater – a feeling that comes back tenfold in a later scene. A great vampire film, yes, but such a great film overall, that words fail to bring it to proper respect. Definitely check this out if you haven’t already, and be sure to see it before viewing the American remake. Perfect proof that the same story does not always make for the same film.

I’ll be honest here. I gave myself a little eye-twitch in even adding this film to the list. I am a geek-of-all-trades and one of the many geeky hats I wear is that of the Lit Geek, so mentioning these “books” written by Stephenie Meyer makes me die a little inside. That being said, the wild popularity of this film (and it’s subsequent follow-ups) earn it a place on this list. After all, there is no accounting for taste. Twilight tells the maudlin tale of super-special Bella and her high school lovelife, which manages to dip a toe into both shapeshifter and vampire legends, albeit sparkly ones. Starring Robert Pattinson, Taylor Lautner and Kristin Stewart, the films were box office gold, though for the life of me, I cannot figure out why.

Seeing as I despise Twilight and everything it stands for, I thought 2010’s Vampires Suck would be good for a laugh. At least it should be better than Twilight itself, right? You would think so, but as it happens, no such luck. Parody is not exactly the highest form of humor, but it can hysterical if done well. Rather than be a funny if fairly cheesy send-up of the recent spate of tweenset vampire lovin’, Vampires Suck was just… stupid. Following far too close to the storyline of the film it attempted to mock and including nonsensical stabs at random pop culture phenomenons, Vampires Suck seems more an overgrown Saturday Night Live sketch than fodder for a decent comedy.

There was a general outcry among hardcore horror and vampire fans alike when it was announced that this film was being remade. Fright Night, the original 1985 film, is a classic. Everyone remembers Evil Ed and, of course, Peter Vincent. It seemed near sacrilege to even think of touching this film, and I was on the bandwagon complaining up and down that it should just not be messed with. On a personal note, I adore Roddy McDowell in this film. I have – and often do – use the phrase “Back, sworn of Satan!” – be it to my dog begging for my dinner or a friend being particularly annoying. So that any studio would even dare think of trying to duplicate that performance was blasphemy to me. And then I found out who would be taking up Peter’s cross.
Though I am not of a huge fan of space-based high drama, I was more or less roped into viewing an episode of Doctor Who a couple years back and was immediately stuck. It is impossible not to adore the Doctor if you actually sit and watch it, and for the first time in a long time, I was immediately struck by the acting prowess of a particular person: David Tennant. I had seen his fairly memorable performances in a Harry Potter film, and in the oddly charming British musical crime drama (yes, you read that right – musical crime drama) Blackpool, but had not, until Doctor Who, noticed that the man was a brilliant character actor. It’s not often in a scene you can see any actor convincingly run a gamut of emotion; it was one of the rare moments where I’d literally stopped and thought “Wow. This guy is good”. This, I realized much later, was the perfect actor to play a modern Peter Vincent. In spite of all this, the Fright Night remake was an amalgam of everything that could go wrong with a remake. Read my more in-depth revere HERE!
So there we have it, about 115 years of vampires on film. Other stories and fads come and go. We see  them all the time, coming in cycles: asteroid films, sinking ship films, alien planet films, bank heist films, and on and on and on. Two or three versions of the same basic plot, pumped out of studios at a rapid pace to compete with one another at the box office. Even as other horrors go in and out of vogue – the zombie films, the werewolf films, the midnight slasher films – it is the vampires that keep coming back to us.
Where do we go from here? Who knows! If we can come up with more than a century of new stories, surely we can come with a few more. Thanks for sticking it out with me. I hope you enjoyed reading as much as I enjoyed writing it!
So what did I leave out? What are YOUR favorites?
Honorable Mentions:
Jesus Christ, Vampire Hunter (2001): Who better to battle blood-sucking fiends JC?
The Breed (2001): Cops, vampires and Bai Ling.
Dracula 3000 (2004): Jason went to space. The Leprechaun went to space. Why not Dracula?
Slayer (2006): So very, very bad that it’s almost good.
Daybreakers (2009): Plague vamps!