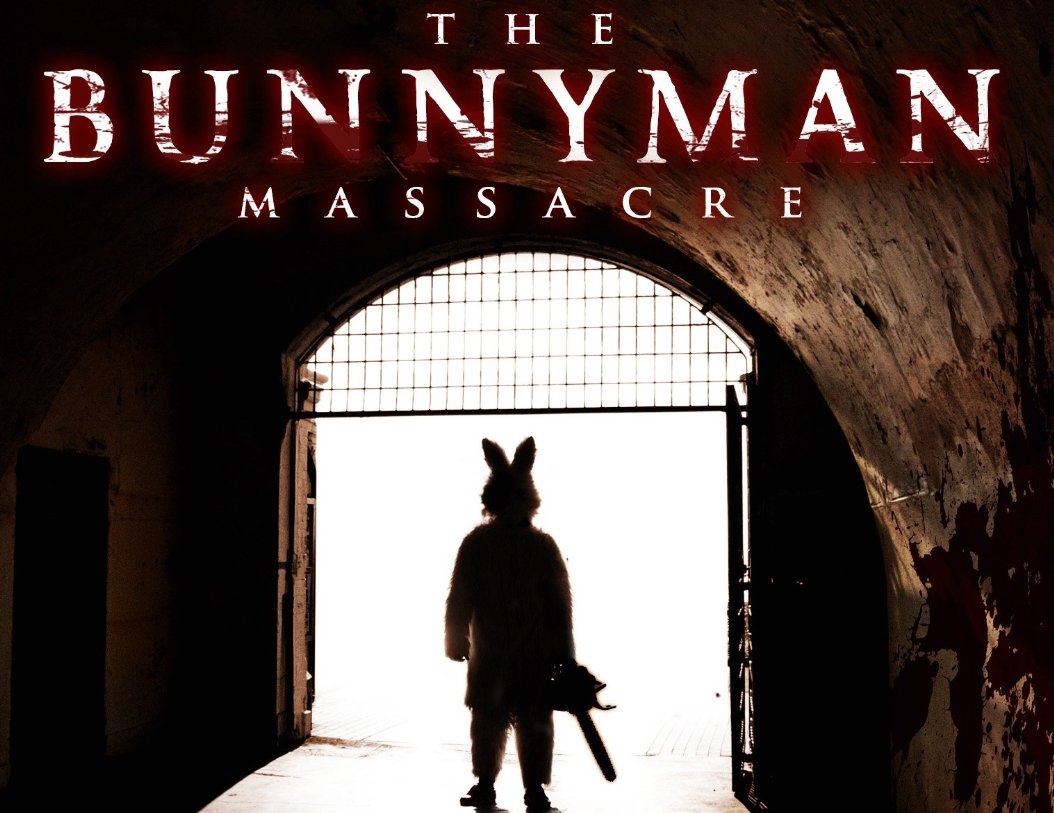 This is yet another slasher film which advertises itself with the “Based on a true story” tagline. After some research, the ‘true story’ can be found here, though it appears to be more of an urban legend than something factual. The film has two titles, for some reason. In the UK it is known as The Bunnyman Massacre but its US title is simply Bunnyman. To eliminate confusion – both versions are exactly the same.
The film’s intention was clearly to promote the urban legend of ‘Bunny Man’, but it did a terrible job at it. The Bunnyman Massacre, or whatever you want to call it, is just a mess. It opens with an 8MM footage of a man stalking a random young woman and killing her – we never find out who the man is or why he killed the girl, it’s just sort of shoved in as an introduction. I have no idea whether it was meant to bare any relevance to the  rest of the narrative, but if that was the case, it certainly doesn’t make it clear.
I usually try to be fair when I review films, but I can’t think of anything good to say about this film. The casting is atrocious, there is no character development whatsoever, relationships aren’t clear, and the acting is possibly one of the worst I’ve ever seen so far. How these people even managed to make it onto the big screen is beyond me. Did they even study drama? Doesn’t look like it. The girls seem to have only been chosen because they’re skinny and pretty, as any personality traits are certainly non existent. As for the boys, they’re equally as idiotic. All they seem to do is swear, argue and make stupid decisions. Let’s face it – if you’re stuck in the middle of nowhere with a ‘Bunny Man’ chasing you in a truck, would you get out of your car and walk through an abandoned forest? No!

The special effects are pretty much non existent, so all death scenes are nowhere near as ‘horrifying’ as the film claims. In fact, it claims that it’ll “scare the hell out of you”, but it’s honestly more comedic than scary – which was certainly unintentional. Some of the dialogue is just ridiculous, and scenes go on so long that they become boring. This is like a badly pieced together high school project. Carl Lindbergh, who directed, produced, edited and acted in the film needs to go back to film school – or maybe try and stick to one element of film making instead of every single role. The only scene that could be considered horrifying is the very unnecessary rape scene that occurs halfway through – though it is brief, thankfully. The scene was tasteless and had no real relevance to the narrative. There is one torture scene, but it’s nothing compared to the likes of Saw and Hostel. Lindbergh should try harder next time.
Another ridiculous factor is that the Bunnyman character was played by four actors – including Lindbergh! Was this really necessary? When I discovered that, I’ll be honest, it just made me hate the film even more. This is everything I want to avoid as a film maker, so I thank Lindbergh for showing me what not to do. Trust me – it’s just terrible.
The Bunnyman Massacre is one of those films to watch with friends when you want a good laugh. That’s all it’s really good for.

One thought on “"The Bunnyman Massacre" (2011) : Probably the Worst Slasher Film Ever”