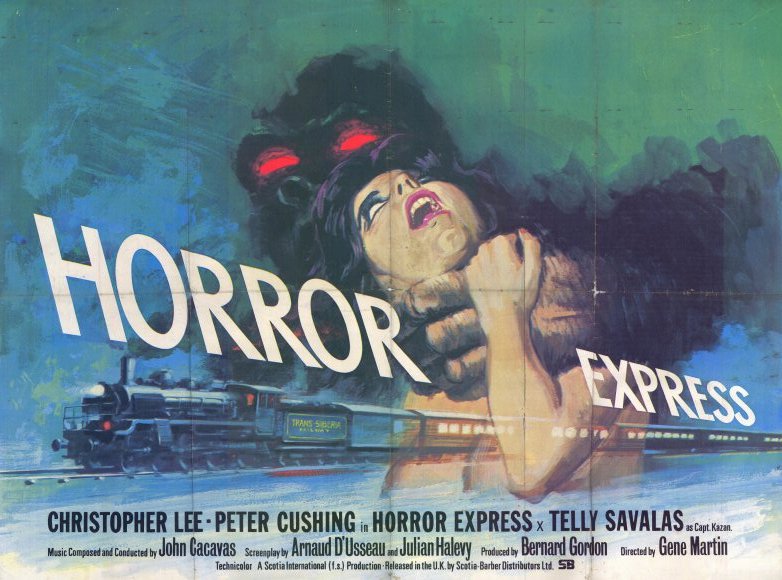 Horror film fan favorites Christopher Lee and Peter Cushing are back together again in 1972’s Horror Express, a tale of prehistoric terror set aboard a moving train. Unfortunately for both veterans stars, the promising premise of the film quickly disintegrates into a confusing mishmash of too many plot twists and characters too strange to believe. 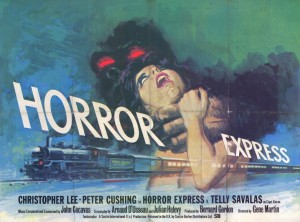 The idea, at the beginning, was a good one. Two rival scientists board the same train traveling through Siberia, one carrying with him a priceless anthropological specimen recently excavated from the frozen tundra. Professor Saxton (Lee) takes the utmost care in securing his specimen from prying eyes, locking it away in a heavily chained crate. However, the security attached to the crate draws an unwelcome disturbance: before even loaded onto the train, a thief attempts to break into it, quickly falling dead on the train platform and gathering a crowd who suppose him blind, due to the sudden complete white-out of his pupil and irises.
A mystic traveling with a Polish count and countess begins proclaiming an evil presence, drawing more prying eyes. Clearly, things are not going to end well. Professor Saxton sees no danger and dismisses the mystic monk’s thoughts without much thought, breaking into a diatribe on evolution and shooing away spectators, including his long-time rival, Dr. Wells (Cushing). Once aboard the train, the horror is finally unleashed when Dr. Wells bribes a train porter to steal a peek of the specimen, letting it loose to wreak its peculiar brand of havoc on the train full of passengers. This is where the plot begins to fall apart. 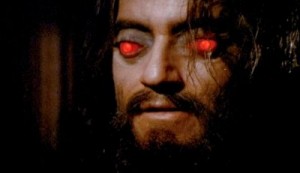 Eyeball fluid containing imprinted images. A fanatic devoted cleric suddenly switches sides. Brains drained of thought and memory to such a degree that it irons out the natural wrinkles in the organs. A stowaway who may or not be a spy. And, best of all, a loud, obnoxious, and flamboyantly dressed Cossack Captain, played by Telly Savalas.
There just comes a point in any film when too many plot twists spoil the overall effect. Horror Express began with an interesting premise, the idea of a captive population speeding through a wasteland with a killer creature on board – something that would be repeated years later in films such as Alien. But when the film tries to incorporate dozens of different dangling plot lines and move across film genres, it becomes far too much for the premise – and the actors – to hold. Moving the film’s villain from the prehistoric era, to modern monsters, to something as far from its beginning as the earth from the sun is a bit much to ask any viewer to believe. Adding in the strange count and countess, and their stranger still cleric friend, it’s as though filmmakers were not quite sure what they wanted to do with the film at all. 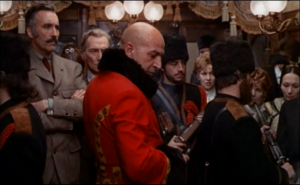 Cushing and Lee are, of course, brilliant in their roles. They play the part of scientific rivals to perfection – not surprising, since so many of their films had paired the two on opposite ends of a stake to the heart. It’s unfortunate that the plot had to take such a nosedive and mar a relatively solidly shared career line. Telly Savalas is a uselessly extravagant addition, helping the trainwreck of an ending along its way toward demise.
Overall, it is an interesting film, though not one of the best. Perhaps better viewed not for the usual perks of a horror movie, but as an example of what not to do.
One bright spot did come in a chuckle-worthy line of dialogue, shared between Cushing and Julio Peña, who played Mirov, a police inspector aboard the train:
Mirov: What if one of you is the monster?
Dr. Wells: Monster? We’re British, you know.
Horror Express (1972)
Stars: Peter Cushing, Christopher Lee, Telly Savalas
Director: Eugenio Martin
Producer: Bernard Gordon, Gregorio Sacristan
Writer: Arnaud d’Usseau, Julian Zimet (as Julian Halevy)