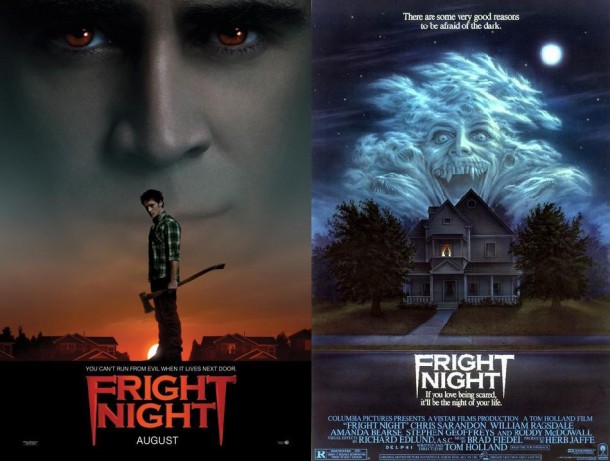 It is impossible to address the state of horror today without paying keen awareness to the exorbitant amount of remakes running rampant in the genre. It seems that at least 75% of new mainstream horror films are remakes of older films, and not just the under the radar direct to video slashers that never got a wide audience. Hollywood is intent on remaking the classics, putting our beloved Freddy Krueger and Jason Vorhees right up on the chopping block to be repackaged for a new generation. The results are almost always lukewarm vehicles for the latest hottest Hollywood body, paying no attention to the history of the genre or the true spirit of the original film. In 2011, one of the best vampire films of the 1980’s became another victim of this remaking rampage: 1985’s Fright Night. 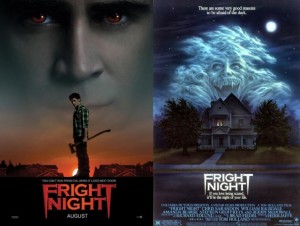 All of the usual problems aside, my biggest issue going into viewing the Fright Night remake was my own affection for the original film. The 1985 version is one of the first horror films I honestly remember viewing; Chris Sarandon set the pace for what I felt a vampire should always be: charming, suave, and unapologetically evil. The film holds such a special place in the hearts of my family that, to this day, we are oft heard to quote Roddy McDowell’s signature line, “Back, sworn of Satan!” – usually at a misbehaving pet, but you get the idea. It would be impossible for me to watch the new film at all without comparing it to the original, and I made every effort to at least take the remake at face value, while keeping in mind that it had a lot to live up to.
The remake jumps headfirst into the plot without any build, setting the pace for what could have been a slick modern remake but instead falls so short of its predecessor and even of horror in general as to make it almost laughable. There is no question of what is happening; we see the carnage wrought by the film’s villain before even meeting the protagonist – who isn’t so much as a hero worthy of a horror film as a teenage douchebag quick to dump his friends in favor of a pretty girl. Meet Charley Brewster (Anton Yelchin), a closeted nerd blowing off longtime buddy Ed (Christopher Mintz-Plasse) to impress the token cool kids in their school.
It became difficult to root for Charley almost from the start; Ed, keenly aware of his old friend’s sudden need to become part of the popular crowd, approaches Charley with clear disgust for his actions, an approach necessitated only by the disappearance of their third friend, Adam. The fact that Charley pays little mind to Adam’s complete disappearance from school and social lives, to the degree that his family home stands empty and abandoned, makes it even more difficult to get behind Charley as the hero of the piece at all. Teenagers can be outright jackasses quite often, but friendship diminishing or not, who wouldn’t find it suspicious when an entire family falls off the face of the earth?
The excuse that is often given throughout the film is that it’s Las Vegas, a town of transients and night people, a fact that somehow makes it okay that entire family units in a planned housing development keep dropping like flies. It’s illustrated very clearly through attendance roll call in Charley’s classrooms that it’s more than just Adam missing; soon, “Evil” Ed himself joins the ranks of the missing, finally causing Charley to tear himself away from girlfriend Amy (Imogen Poots) long enough to see that something strange was happening.
Stepping into the role of the neighborhood vampire is Colin Farrell, playing a slightly less reserved Jerry Dandridge than was imagined in the original film. This in itself is not a problem; even though the script has Dandridge outed as a vampire fairly quickly, Farrell still does well to maintain some degree of mysteriousness and hidden danger as the story progresses. In fact, the biggest issue with the new and not necessarily improved version of Jerry Dandridge comes in his stilted and uncharacteristic dialogue. The script has Dandridge constantly referring to other men as ‘guy’, as in “You up for that, guy?”. The line itself just falls strange against the ear – who says that, really? I’ve heard banter exchanged where an anonymous man is called ‘buddy’, even ‘pal’, but ‘guy’? It’s strangely outdated and takes the viewer right out of tense scene the actors are trying to create.

As if specific verbal hiccups were not enough, Farrell’s first long bit of dialogue with Charley seems more smarmy than scary, as though he were simply a creepy guy next door and not necessarily a vampire. It’s clear that the writer had intended it to be intimidating, but it only comes off as weird.

Women who look a certain way, they… they need to be managed. It’s true. Your dad ducked out on you, huh? Your mom, she didn’t exactly say, but there’s a kind of… neglect. Gives off a scent. You don’t mind my saying, you got a lot on your shoulders for a kid. The two of you, alone. And your girl… Amy. She’s ripe. I bet there’s a line of guys dying to pluck that. Your mom, too. You don’t see it. Maybe you do, but she’s putting it out.

This is not the terrifying threat of a vicious vampire… this is the creepy diatribe of the sleazy guy you don’t want to sit next to on the subway.
The hits just keep coming as the viewer is introduced to the new incarnation of Peter Vincent, this time taken on by the brilliantly talented David Tennant. It must have been daunting to take on a character originated by Roddy McDowell, a storied actor beloved by many audiences, not the least of which being horror fans. If anyone was up to the challenge, it was Tennant, though his performance suffered in the wake of the awful script that was served up for this tepid remake of a classic film.

Some changes were necessary; the entertainment world has changed to the degree that we no longer see the late night horror host styled character that Peter Vincent was imagined as in the original film. The remake shows its very first spot of cleverness in changing the role so that Vincent is no longer a television host, but a Vegas magician with a gothic flair, banking on the image of a man well versed in all things strange and spooky to draw in crowds. The idea that such image is put on for the cameras and crowds is driven home in a fantastic scene where Tennant, as the famed Peter Vincent, strips away the clichéd gothic trappings of piercings and goatees, revealing a very different man beneath the disguise. This is probably the only clever portion of the film. The rest plays out in a yawn-inducing borefest barely worth the time taken to watch it.
The clichés keep on rolling in. Charley fails to save his first damsel in distress. His mother is targeted by the vampire next door, as well as his girlfriend. Viewers are treated to a ridiculous scene in which Dandridge pulls a gas line out of the ground and blows up his neighbor’s house – something the rest of the neighborhood somehow fails to notice entirely. The worst of the clichés comes in finding (spoiler alert!) that… dun dun DUN… Dandridge is either from the same line as or is the exact vampire himself who killed the young Peter Vincent’s parents! What is this, a soap opera? Even the Dark Shadows television reboot had better storylines.
Any fan of horror is well-used to bad remakes at this point, but I was very thrown to learn that the screenplay was written by none other than Marti Noxon. As a longtime fan of Buffy the Vampire Slayer, I recognized Noxon’s name immediately. She was credited as the writer of several fan favorite episodes, such as What’s My Line Part 1 and 2, Bewitched, Bothered and Bewildered, and I Only Have Eyes For You, it was shocking to see that the snappy dialogue and clever plots the Whedon series was best known for do not surface at all in this film. It felt like something akin to getting tickets to see your favorite metal band and finding them taking the stage in lederhosen and playing a polka.
Suffice it to say that the heart and soul of the original Fright Night were gutted and stripped away, leaving behind only a cheesy maudlin husk that was remixed and remodeled for a young audience, resulting in a film that made fans of the original weep in disgust.
Am I telling you not to see it? No. Because David Tennant and Christopher Mintz-Plasse both do admirable jobs with the steaming pile they were handed. None of the actors in this film – notable names, all – deserved to be linked to this terrible terrible remake. See the film, but first, see the original. Compare the two. And come to understand why bad remakes of great films need to stop in every genre, but most of all in horror.