In all honestly, Slither doesn’t break any new ground. The idea of a parasitic creature falling from the sky to begin a campaign of feeding and enslavement of the human race has been put to film literally dozens of times. That being said, outside of a few poorly done big budget remakes and SyFy channel made for television films that were conceived, scripted, and filmed badly, there hadn’t been much in the way of purposeful B-movie creature feature making its way to the silver screen. 2006’s Slither changed all of that – and for the better.
Starring fan-favorite character actor Michael Rooker, Elizabeth Banks, and noted geek-god Nathan Fillion, Slither spins the story of a small town beset by an alien interloper intent on taking Earth for its own. The setup is simple; Rooker stars as Grant Grant, a wealthy local man with a less than pleasant personality and who is married to pretty young Starla (Elizabeth Banks) sets about philandering with local woman Brenda (Brenda James), when the two come across something strange seemingly fallen from the sky. Upon going to inspect, Grant is summarily shot in the chest by the creature, causing Brenda to flee and abandon him to his fate.

Strangely enough, Grant lives to see another day – in a manner of speaking. Now infected by the creature, Grant finds himself insatiably hungry. Neighborhood pets and livestock go missing, but no one suspects where they are really ending up. Grant soon shares his infection with hapless Brenda, who balloons up to an enormous size, full of slithering space-worm offspring. Soon town sheriff Bill, played by Nathan Fillion, gets involved, and the town is set upon by the recently emerged worm offspring.
With a mildly predictable subplot – a long-held unrequited love affair between Bill and Starla – and a somewhat formulaic approach to the alien invasion, on the face of things Slither seems that it might not be worth the time of the avid horror viewer, but don’t make that mistake! What sets Slither apart is its fantastic cast and wonderful tongue-in-cheek sense of humor. They didn’t make films like this in the day of the B-movie horror shocker, and there aren’t many today that can compare with it now. 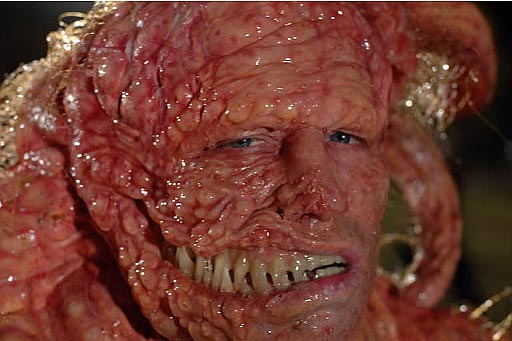 Michael Rooker is brilliant in this film. The subtle transformation from the unsavory normal Grant to the infected creature still holding some aspects of his personality is done in a manner not seen often enough in film – usually, the bad guy who changes into the big bad doesn’t make much of an evolution, but Rooker manages to portray to very different versions of a man you would not want to make time with. Nathan Fillion is his usual affable and amusing self, with the perfect comedic timing and just the right balance of small-town sheriff and big damn hero to draw in fans new and old. Gregg Henry serves as perfect comic relief right alongside Fillion, as town mayor Jack, uttering one of my all-time favorite horror movie lines: “What kind of thing wants you to eat it?!”
The effects, both CGI and practical, are done well, with fun and grotesque character transformations that all at once make viewers laugh and cringe. This sort of on-actor appliance work is so rarely seen lately that, even if the techniques used are the standard, they seem refreshingly new and interesting.
Slither is more than just a movie. It is a love letter to the sort of films we all grew up watching and loved, and a much needed throwback to the days when fun and laughter were as much a part of the films as blood and gore. Here’s hoping we see a few more like this!
“Slither” (2006)
Stars: Nathan Fillion, Elizabeth Banks, and Michael Rooker
Director: James Gunn
Writer: James Gunn
Rated: R