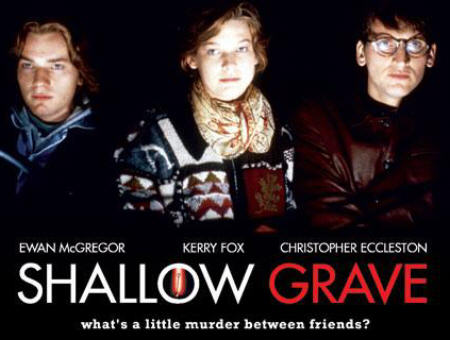 Can you really trust your friends?  The people you see nearly every day, who know all your big secrets and all your little lies?  Would you trust them with your life?  With someone else’s?  These are the questions that arise in the quirky psychological horror-based film Shallow Grave, which stars a very young, pre-Trainspotting Ewan McGregor and Christopher Eccleston, who would go on to portray the title role in a re-vamp of Doctor Who. 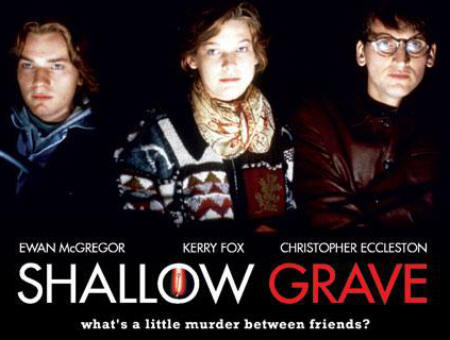 The story is simple enough.  Three twenty-something friends who share a flat in the heart of Edinburgh are in search of a new roommate; trouble is, the close-knit group is more than a little unwillingly to let a newcomer into the fold, flat-out mocking many potential roomies before sending them right back out the door.  Enter Hugo, a quiet and quirky man who withstands their rudeness, only to be given the coveted fourth room.
And then it all starts to go bad.
No matter how close any friendships seem, they all have their hidden dangers.  Lurking beneath the joviality share between Alex (McGregor) and David (Eccleston) is a quietly seething competition over their third friend, pretty doctor Juliet (Kerry Fox).  Add in some money and dismemberment, and things start to go south very quickly.
Unbeknownst to the three friends, Hugo is not all he seems. On the run with a lot of money seemingly stolen from some less than savory members of the drug trade, Hugo is a wanted man. When he winds up dead in his bed, the three have a difficult choice to make: call the police, or keep the money and get rid of the body?  The lure of the cash is too much for them, and they set to work disposing of their former roommate.  David is left with the unpleasant task of breaking poor Hugo down into bits to bury, revealing for the first time a perhaps not-quite-so-sane mental state.
Greed saturates this film.  The three ‘friends’ are at each other’s throats.  They want the money.  They want each other.  They want everything, and they will not stop until they get it.  Hedonistic Alex carelessly fritters away cash while unstable David squirrels away to the attic with peepholes drilled throughout the floor to spy on his ‘friends’ to be sure they aren’t going to steal away with the money. Juliet plays both sides back and forth, allying herself with either man depending on who has control of the cash.  All the while, the drug dealers are on their way to get their money back and the police draw ever nearer to finding Hugo’s dismembered corpse.
The atmosphere is thick with fear and foreboding.  The viewer doesn’t know who poses the greatest threat: crazy David in the attic, the police, or the drug dealers?  Quiet turncoat Juliet could easily be waiting to take her chance at stealing away with the cash, and even Alex seems to be becoming unhinged. For a film with no real haunting villain and no supernatural premise, it is thick with horror and worry.  They have only to fear each other, the greatest villains of all.

Action ranges from subdued to frenzied moments of panic; some parts of the storyline can seem disconnected (I still haven’t figured out why Alex was in a dress for a period) but overall, it is well put together.  The actors played well off each other; McGregor presents shades of his future characters with the affable Alex, and Eccleston becomes downright creepy – the kind of guy you wouldn’t want to be alone in an elevator with.
What’s brilliant about this film is the lack of a concrete villain.  It’s far too easy to create a singular purely evil ‘monster’ for the protagonists of the film to fight against.  In Shallow Grave, the viewer can empathize with all three main characters, all the while abhorring their actions.  The ruthlessness of the three roommates is reminiscent of the sort of actions seen in Lord of the Flies; only, rather fighting for their survival, the three former friends are battling their own green-eyed monsters.
The greatest enemy of man is man himself; this film more than proves it.