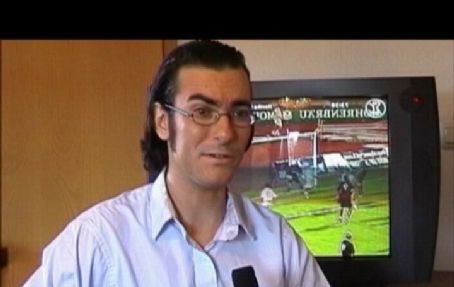 When a film promises horror and comedy inspired by H.P. Lovecraft and in the tradition of George Romero, with a Monty Python-esque twist added for good measure, it can make a viewer very skeptical. However, Biff Juggernaut Productions’ LovecraCked! delivers on its promises—and then some.

Told in the style of a spoof documentary on legendary horror author H.P. Lovecraft, the film switches back and forth between short films based (some very loosely) on Lovecraft’s tales and a progressive storyline involving a schlock journalist presenting a skewed take on Lovecraft’s life and times.
In the role of the Journalist is Elias Ganster (here simply credited as “Elias”). With a mixture of faux seriousness and outright lunacy, Ganster gives a performance with shades of a young John Cleese, ranging from over the top freak-outs, random scenes done pants-less and a dry comedic one-liners about his intended subject such as, “This…was not his house.” The Monty Python inspiration is clear here, and is done admirably without either seeking to simply duplicate the style or over-interpret to the point of mockery.
The horror shorts range from funny to frightening, the best of the lot being “Alecto,” involving a clearly insane violinist, and “Remain”, another treatise on a creative soul and his art, this time involving a painter. Both of these shorts rely heavily on atmosphere, using setting and sound to tell their stories rather than dialogue, and are short masterpieces in psychological horror.
For pure gore quality, the short “BugBoy” is best, while “History of the Lurkers” presents a tongue-in-cheek take on the summoning of evil and creepy adult store shoppers.
Be that as it may, the film is not without problems. In several segments, the use of dialogue re-dubbing is obvious and distracting. While possibly a necessity for sound quality alone, the distraction detracts from the intended horror and/or hilarity of the scene, taking the viewer out of the realm of the willingness to suspend disbelief. An over extended trip to legendary Troma studios (complete with a chat with Toxic Avenger director Lloyd Kaufman) provides a few laughs, but runs a little too long to sustain the comedy.

These are, of course, only small issues in what otherwise is a quality independent film. The downfall of this film, however, is so glaringly obvious that it cannot be ignored. An extended segment of actual porn, “Re-Penetrator,” gleaned from alternative adult site BurningAngel.com, is not only oddly out of place in the film, but so unexpected as to turn off the unsuspecting viewer. Make no mistake: this is not the requisite sex scene that inundates horror films. Rather, it is standard Internet horror-porn that not only does not belong with the other shorts, but would be better placed in some fetish video store.
Overall, LovecraCked! is a funny, refreshing take on horror-comedy, and a huge step up from the more standard lampooning films of the genre (Scary Movie, etc) that perpetuate the same old shtick, over the over again. Worth watching for the laughs it provides (I’m still chuckling over “This…is not his cow”) but BE WARNED that it contains extreme adult content towards the end and lacks a proper label giving the viewer appropriate warning.