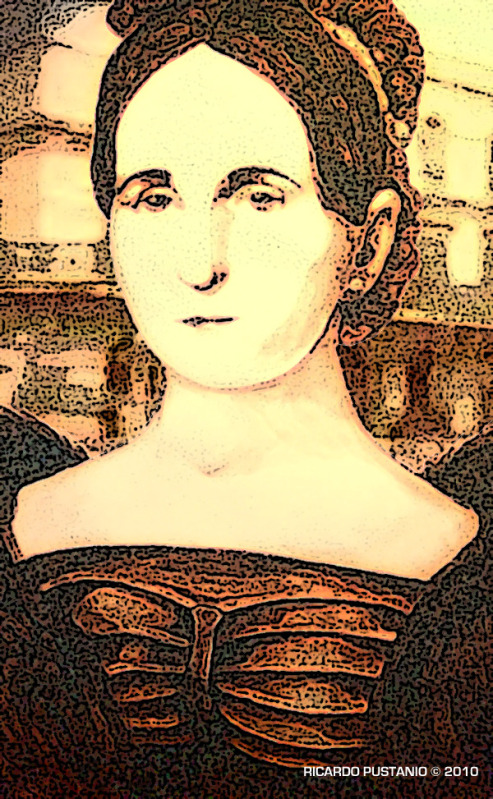 WARNING: This article contains images and descriptions of real crimes and crime scenes. Reader discretion is advised.
Horror isn’t always about make-believe monsters. True crime stories have provided the inspiration for dozens of horror movies. Sometimes, the killers who stalk the night are just ordinary people. Sometimes, the killers are real.
American history is still haunted by the specter of the evil that one man could do to another; there is no escaping the atrocities brought about by the utterly insipid belief that a human being’s worth, their very status as a person, could be defined by the amount of melanin in their skin. The far-reaching consequences of the rampant slave trade of America’s first centuries are still seen today, and every schoolchild is taught of the evil that was done, perhaps in hope that this blight upon history would not be repeated.
But even in the days of slavery, there were still lines that were considered to evil to cross. True, the reality of the day to day horrors of slavery can never really be understood by modern Americans, but even those living in the 21st century can recognize the deep-seated malice in the actions of one of 18th century New Orleans’ most prominent citizens, Madame Marie Delphine LaLaurie.
There was nothing spectacular about Delphine Macarty, just another socialite in New Orleans society in the late-1700s. Some noted her beauty, though it was more than customary to do so when a woman was bred of high birth. She married, was widowed twice, and bore several children, traveling for some time before, by the early 1800s, taking a home at 1140 Royal Street in New Orleans and building it up to a sprawling and opulent three-story mansion. Her latest husband, more than two decades her junior, seemed pleased to let Delphine, now known as Madame LaLaurie, manage the household however she saw fit, and life continued comfortably for their family… in spite of the rumors already swirling about among New Orleans society. 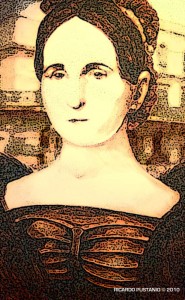 They said that Delphine had a cruel streak, and a wickedly curious scientific mind. Rumors spoke of a neighbor who had spied a young slave girl climbing to a rooftop, with a viciously whip-wielding Delphine right behind her. They said the girl fell to her death rather than face whatever cruelty Delphine had been ready to unleash, and was buried on the mansion grounds in secret. Rumors even persisted that Delphine would turn her whip on her own daughters, should they ever attempt to attend to the plight of the beaten and starving slaves held in residence at 1140 Royal Street.
In spite of the innate cruelty of the practice of slavery and the laws that allowed it, there were still left in place in New Orleans at the time laws that forbade particularly brutal treatment of the victims of slavery; Madame LaLaurie’s reputation as a cruel mistress finally reached enough ears that local government dispatched a lawyer to her home to remind Madame LaLaurie that excessive cruelty would not be accepted. However, upon his visit, the lawyer seemed satisfied that there was no cause for concern, and left the LaLaurie mansion mollified, for the time being. It probably was no detriment to the LaLaurie’s cause that they were close friends with a prominent local judge, who helped shield the family from any further investigation.
It was only through fire that the horrific truth of Madame LaLaurie’s house of horrors was revealed. An 1834 fire at the LaLaurie household, brought quickly under control by a volunteer fire brigade, finally exposed the truth. After putting out the fire, a peculiar odor emanating from an attic room reached the volunteer firefighters, leading them to break down a bolted door, and discover the true face of Madame LaLaurie’s evil. 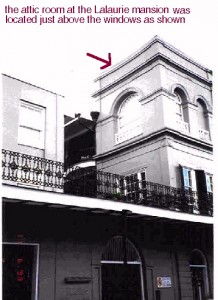 Accounts vary as to what was discovered in the attic dungeon of the LaLaurie house, but all agree that slaves kept there were in various states of torture… and even dissection. Madame LaLaurie, it seemed, had fashioned herself some sort of mad doctor; though never proven, rumors persist to this day that a dozen slaves kept chained in the attic had undergone medical experimentation, including men whose gender had been forcible surgically altered, women found still alive and nailed to the floor, and others hanging by their necks, their limbs stretched out in tortuous lengths by iron chains. Some were even said to have their lips sewn shut, to prevent their screaming; others were said to have bones that had been broken and cast into inhuman crippling shapes and angles. Some were dead, but many were still alive, said to have been kept conscious and breathing only to prolong the suffering that Delphine reveled in inflicting. Body parts and internal organs were left scattered about in troughs and buckets, left to rot alongside the newest victims.
The fire was thought to have started in the kitchen, where the household cook, another slave, was kept chained to the stove. It was thought by many that she had started the fire in order to call attention to the horrors happening daily in the LaLaurie home. The judge could protect the family no more, and as spectators lined up – some numbers quoted as more than four thousand residents of New Orleans – to bear witness to the atrocities that had been done, the LaLauries had no choice but to flee the city if they wished to escape with their lives.
Surviving slaves confirmed the horrors that had been found, trembling even as they spoke of their own terror at the thought of being taken to the attic and added to the growing pile of the Madame’s playthings.
Their home could not escape the wrath of the citizens of New Orleans, who, in spite of their acquiescence to the practice of slavery itself, were horrified by the extreme tortures that Delphine had inflicted. The LaLaurie house was ransacked, anything of value taken or destroyed. It is said that bodies were found scattered about the mansion grounds, some buried, others sealed up in an old well on the property. The numbers vary as to just how many victims Delphine LaLaurie had claimed, some saying as low as only two, while others claiming them into the dozens, men, women, and children alike.
As for Madame LaLaurie herself? No one knows for sure. All that is known is that she escaped New Orleans and the wrath of its community; most believe she escaped the very night the house burned, sailing first for New York, and then for France, to live out her days in luxury, inflicting god knows what sort of evil on those unfortunate enough to come into her new household as slaves.
The house at 1140 Royal Street still stands. It has been used in both private and public functions for many years since the LaLaurie’s sudden departure, and it is considered to be one of the most haunted houses in America, with tales of the cries of tortured slaves being heard throughout the night, and even apparitions of the evil Madame LaLaurie herself. 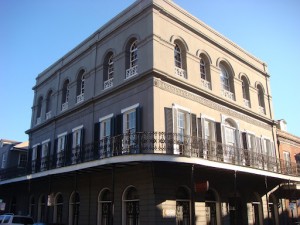 Strangely, the house was purchased in 2007 by a shell corporation operating on behalf of quirky actor Nicholas Cage, though he lost the property to foreclosure only a few short years later.
It is rare that an evil even greater than the practice of slavery can be found, but Delphine LaLaurie did her best to embody that malice. Centuries after the atrocities she committed, tales of the horror wrought by her hands still haunt the streets of New Orleans.