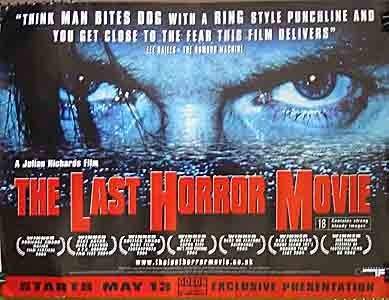 If you’re looking for a pointless, mindless gorefest, do not watch this movie. If you want a teenage slasher film, don’t bother with this one. But if you’re looking for an example of real horror, or a film so unsettling that it dwells on your mind after it’s over, then you’ve found what you’re looking for in The Last Horror Movie.
Meet Max Parry: a charming, friendly filmmaker, fond uncle to two nephews, an all around nice guy. He films weddings for a living, but it is the movies he makes on his own time that are really interesting.
You see, Max is a little different from you and me. He has his own brand of philosophy in life and follows it to the fullest. “…That’s the advantage of being a psychopath,” as he tells you, smiling into the camera and speaking in his congenial tone and British accent. “You don’t have to take any shit from people.” He proves his motto only moments before, when viewers are treated to watching a slighted Max get his revenge on a particularly nasty groom… by tying him down to a chair and lighting him on fire while still alive and conscious.
All in a day’s work for Max.

Starring little known actor Kevin Howarth as Max, this British indie film snuck under the radar in spite of its innovative twist on the horror film itself. The movie opens with a classic horror setup: escaped lunatics, Halloween masks, pretty waitresses closing up a diner late at night… but before the cliché gets too far, the film cuts out and goes to camcorder-quality images of a man – our Max – beating another senseless with a brick. It’s not long before Max begins to eulogize in front of the camera, and we understand his purpose.
“I’m trying to make an intelligent film about murder, whilst actually doing the murders.”
He kills indiscriminately, as he will cheerfully tell you. Men, women, old, young… he doesn’t care. His methods vary, from stabbing to strangulation and back again, and in the midst of all the murder and chaos, he visits his sister and plays with his nephews, and has tea with his aging grandmother. He dines with friends and ponders their murders in the same day. Max is an enigma, a double-sided coin. He seems perfectly normal, his cheerful smile belying the murderous psychopath he truly is. And yet, even as we watch him kill, there is a frightening logic to his deeds. 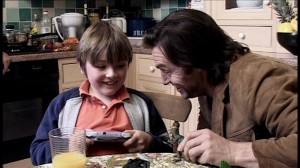 One of the most chilling scenes involves two soon-to-be victims, a man and woman, bound, gagged and tied to chairs. Max stands between them and directs his assistant, a young man who manages the camera while Max is busy killing, to close in on the face of the man. We then watch his horror and frantic – though useless – attempts to break his bonds while the woman utters muffled screams off-screen. He repeats the process, this time ordering his assistant to train the camera lens on the lifeless body of the woman as the man screams behind his gag. 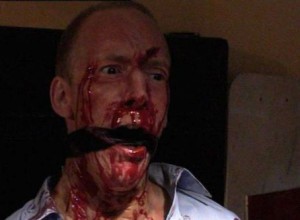 When the camera goes back to Max, he is smiling. He knows what we’ve been thinking of him all this time, knows that we count him as a murderer and a lunatic. But he knows something else, and reminds us of it with a simple question: “The question is… were you at all curious to see what was happening?”
Anyone can make a film that showcases the horrific deeds of an unrepentant lunatic. What none have done before The Last Horror Movie, however, is make us question our own motives. Max’s speeches, interspersed between his murders and his time spent with friends and family, make us think. Sometimes, it seems, the psychopath understands us better than we do him. 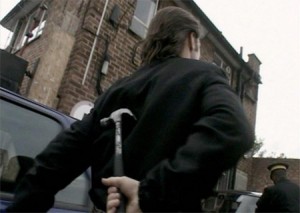 The most amusing point comes at the end, when Max reveals his little secret. You are not watching The Last Horror Movie, he tells you. You are watching HIS film, that he taped over the trashy slasher you had rented. And, best of all, you’re going to be the star of the very next Last Horror Movie: because he followed you home, and he’s waiting to film your impending death scene.

This strong film is not for the weak of mind – or stomach, for that matter. The deaths are terribly realistic, down to the sound of a blade and the flow of blood. It looks real, almost too real. But it causes the viewer to think; it is one of those rare and wonderful instances of a film that is not only GREAT horror, but a GREAT movie in general. It is disturbing and unsettling and it will leave you feeling uncomfortable and yet wanting to watch it again.