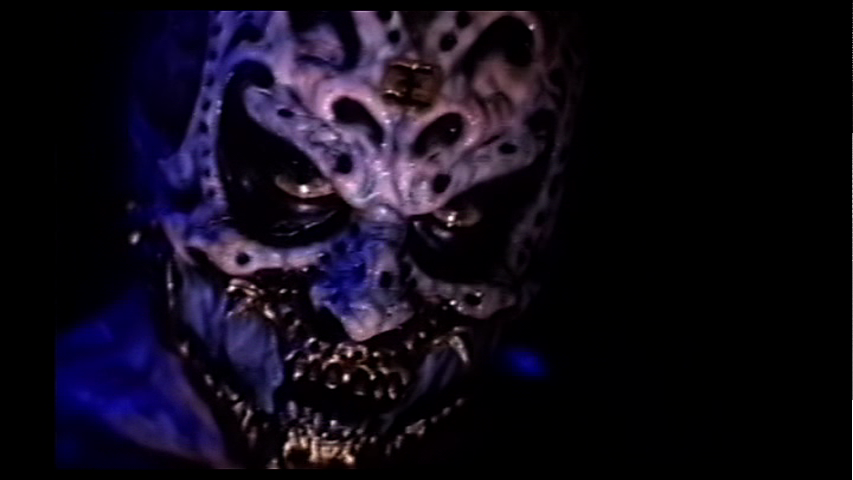 Oriental culture has always made for popular cinema, as evidenced by the ever-growing popularity of directors from the Far East, immortal martial arts films, J-horror, etc. Of course, there are always going to be those really stubborn people that refuse to watch anything made out of the good ol’ USA, so how do you get the same culture onto film, but with a western spin? Set it in a location that’s purpose is just that: Chinatown! The late eighties saw a few films see release set around San Francisco’s Chinatown, including John Carpenter’s excellent Big Trouble in Little China and the Eddie Murphy vehicle The Golden Child. And then it’s just common knowledge that for every popular American film, there’s a Canadian and an Italian counterpart (not sure what the status is on Chinatowns in Italy, though). And who better to do a Canadian rip-off of Big Trouble in Little China than John Fasano of Rock ‘n’ Roll Nightmare and Black Roses fame?

Michael (Sal Viviano) is your average guy whose life is going pretty well, as he’s just gotten engaged to his girlfriend, Alice (Marilyn Tokuda). However, both are devastated when Alice’s uncle’s shop is robbed and vandalized by a vicious gang of street punks who’ve moved into Toronto’s Chinatown, and her uncle is killed in the process. However, a kind old sorcerer (James Hong) and his grandson (John Quincy Lee) perform an ancient ritual and bring the uncle back to life in the form of a jiangshi, basically a Chinese hopping vampire. The jiangshi gets loose and causes havoc in Chinatown, so now this unlikely group must deal with the gang out for the uncle’s money and this bizarre new problem.

As ridiculous as a “Chinese hopping vampire” may seem (and it definitely is), there have shockingly been a surprising amount of films featuring them as antagonists, protagonists, or both. Most are Asian (of course), but there are over 100 movies with jiangshi in them, most of which came out before The Jitters, so this movie takes the idea and pokes fun at it a lot. I must also say that while this is definitely low budget, it’s incredible what a step up this is from Fasano’s other works (Black Roses, which I found dull, and Rock ‘n’ Roll Nightmare, which is one of the best unintentional comedies of all time). It’s a funny movie, but all the humor in this is purely intentional. Fasano knows how absurd this concept is, and he has a blast with it. Sal Viviano is no Kurt Russell (the personalities of Jack Burton and Michael are totally different, though), but he and his hair fit well. And you can’t have a Chinatown movie without James Hong (he was in all three of the Chinatown movies mentioned here), who’s as good as ever as the quirky sorcerer. The acting in this movie isn’t good, but it does look like all of them are having fun making it.

Whereas Big Trouble in Little China (this movie may not seem like a rip-off, but there’s more similarities between the two than meets the eye) excelled in both comedy and action, The Jitters does a good job with the humor and a passable job with action. There’s great comedic timing with where each humorous part is placed, and some of it is really clever (the way the jiangshi stops at a stoplight was really funny). The choreography on the fight scenes looks like it would be good, if the actors performed them at a good speed and didn’t look like they were constantly attempting to hit their cues on time. The end fight was very disappointing, in part due to the camerawork around it, but no matter. It’s a struggle to label The Jitters as a horror movie, even though it does deal with vampires and there is a nifty (okay, it was really cool) transformation scene where, for no reason, an uber-vampire pops out of another vampire. No explanation, but you’ll get no complaints from me.

The thing with The Jitters is that that’s pretty much all there is to it. It’s a relatively short movie, and it plays out exactly the way you think it will. It’s mainly the four main characters running around trying to control the jiangshi, the gang acting “bad,” random fight scenes, and a little more. I can commend it for having fun with its little budget, but at the end of the movie, it fells like there should have been something more. More plot elements? Maybe. A bigger budget? Certainly. Chinatown is such an interesting setting, and I found it disappointing that they primarily stayed in and around the same locations for the whole movie. Take the climax, for example. The climax, for such a cheap movie, is staged very well. It goes on for a while and involves a battle between the gang and the protagonists, plus the jiangshi. The problem is that it all takes place in an alley. It’s not a bad location, but if the brawl was in a cooler spot, The Jitters would have ended on a much bigger bang.

As painful as a Canadian Big Trouble in Little China rip-off sounds, The Jitters surprised me by being a fun and breezy watch. The movie is a big step up from the laugh-out-loud ineptitude of Rock ‘n’ Roll Nightmare and the dullness of Black Roses, and manages to succeed as a serviceable action/comedy/horror flick. It has no real ambitions and doesn’t attempt to do anything too special (well, aside from that great transformation) and is quite comfortable with its miniscule budget. It relies on entertaining writing rather than gruesome gore and special effects. Retromedia recently released The Jitters on DVD with picture quality comparable to that of a really good VHS tape, two promo trailers, and a fun and insightful audio commentary with Fasano and Marilyn Tokuda featuring some entertaining stories about the production. The Jitters isn’t a great movie, nor a terribly memorable one, but it’s one I had a good time with and one I’ll be viewing again in the future. It even ends on a theme song reminiscent of the theme from Big Trouble in Little China. Go figure.
The Jitters is just one of those movies you can’t hate; with its childish humor, kung-fu fights, Chinese hopping vampires, and bad guys so over the top you won’t be able to ever take them seriously, this is one that’s worth seeking out.