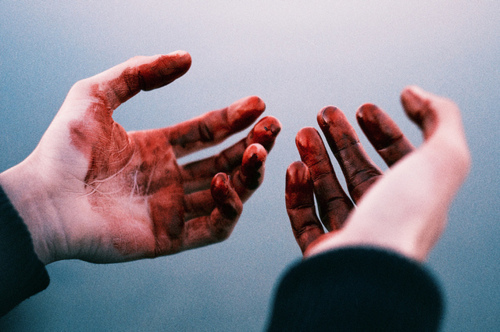 He had always been fascinated by humans. He remembered sitting in his classroom listening to Mrs Woodhouse, and focusing on the beating pulse on the side of her neck.
Beat
Beat
Beat
It never wavered, or stopped. It just kept beating, keeping her translucent skin flushed and the blood rushing through her body.
Her skin had called to him – he was in thrall of the way that it stretched over her skinny frame. It moved over her contours, pulling and sagging in places but always making his fingers twitch with the urge to touch. His mind had filled with images of her skin adorning his walls; serving as his duvet, and his clothing. He wanted to wrap himself in her flesh. He craved the feeling of her soft, thick hide gliding over his own skin. He could feel his blood quickening at the thought.
Everywhere he went he watched humanity walking, sitting and living in their skins. The differences between them all enthralled him. Each body had such interesting characteristics; each person moving differently. He stood in crowds just to be surrounded with the fragrant sweat of skin, and to see the object of his desires. He imagined peeling the skin off of all of them, peeling it all off in one go to maintain the trophy that fixated him so.
In his dreams he could smell the blood mixing with the sweat, and he awoke to a constant arousal that could not, and would not be sated. He hated living in his house. The synthetic fabric that adorned the walls and furnishings of his living rooms were false. The fabric smell of plastic and dust was a constant smack in the face to him. He wanted nature – flesh and bone and skin.
It dominated his living moments. The urge to finally feel what he craved only grew more intense as he grew into manhood. He would descend the stairs every morning only to be confronted with the temptation of skin with rushing blood; a constant symbol of life and vitality. The woman who had born him would smile sweetly at him and offer him some kind of cereal.
It wasn’t what he wanted. It was never what he wanted.
He sat in silence, staring at the blue vein glimmering in the woman’s wrist. He marvelled at the fragility of human skin. Of human life. He saw himself lifting the knife from the place setting before him, and slicing through the thin barrier of flesh. He could vaguely hear the screams, but his blood was roaring in his ears. He cut the other wrist. Symmetry. Finally, he would feel what it would be like to give in to his desires.
The skin peeled easily, and the screams faded to silence. The only sound he could hear was the squelch of skin separating from the muscles and tendons. The smell was exactly what he had imagined – tangy, salty and it filled the air. When he was finally done, he let the structure of the body fall to the ground with a thud, a finally wrapped himself in the perfect hide.
He smiled.