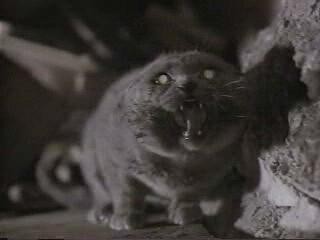 Horror films have always had a certain knack for taking the mundane aspects of every day life and turning them against us. We have seen cars turn on their owners, the electricity in a home gain sentience and attack, and even a video tape wreak havoc on unsuspecting viewers. So it should come as no surprise that family pets have become a horror film villain staple. All sorts of domesticated animals have gone bad and gone for the jugular on the silver screen; even the usually boring and docile farmland sheep have gotten their bloody revenge!
Portrayed the most often as vicious turncoats are the very cherished pets that so many of us have lounging on our sofas even now. The most common of household animals are the ones quickest to take us down: our dogs and cats. But which pet gets in more digs? Take a look and see which species rules the horror roost, as we pit them against one another in the ultimate challenge: Dogs vs. Cats: Horror Villains.
First up for the cats is…
Church the Undead, from Pet Semetary

In this film based on the Stephen King novel of the same name, family pet Church falls victim to a passing truck and is put to rest in a cursed Native American burial ground, bringing him back to life with a few… significant changes. A little bit smelly and a little bit vicious, Church’s once friendly personality has evolved into that of… well, a cat. Some hissing, a few brutal small animal massacres, and some vicious scratching by the revived Church are definitely a change from the more congenial Church in life, but this new dickish behavior is really just more indicative of a cat being a cat. Here kitty kitty!

For the dogs…
The Dog, Devil Dog: Hound of Hell 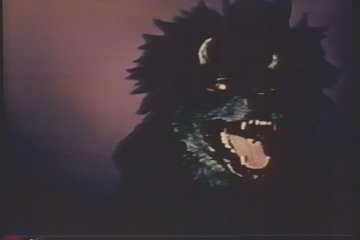 After the loss of the family pet, the Barry family buys a new pup from a roadside vendor, never knowing that the seemingly kindly vendor is a Satanist, and their new puppy is one of the devil’s own four-legged minions. While the rest of the family is thrilled with their new pet, the patriarch, played by Richard Crenna, notices something just a slight bit off about the dog. It soon becomes apparent that Satan’s best friend can control the minds of anyone it chooses, causing them to do harm to themselves and to others. One by one, the hellhound takes over the family’s souls, all the while wearing a very stylish wig.

For the cat’s side…
1000 Hungry Felines, The Night of a Thousand Cats 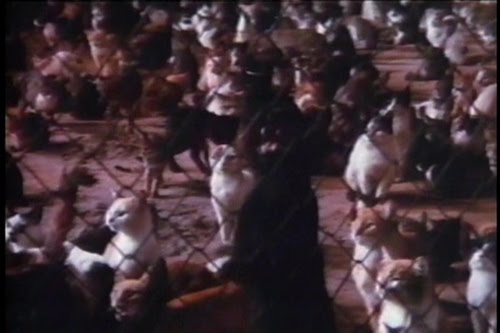 It sounds like the setup for a soap opera at the outset; a wealthy playboy spends his days and nights seducing beautiful women and bringing them back to his opulent home. That’s when things take a much darker turn. As it happens, rich Hugo is more interested in finding inventive ways of killing his beautiful companions than anything else, and adding their pretty faces to his collection. The rest of the bodies are pulverized and fed to his small feline army, a bloodthirsty gang held at a fenced-in enclosure. When one of his intended trophies makes a daring escape, Hugo is left to deal with the released mob of hungry felines who hold no loyalty to their benefactor, with very predictable consequences. Om nom nom!

On the dog’s team…
Max, from Man’s Best Friend 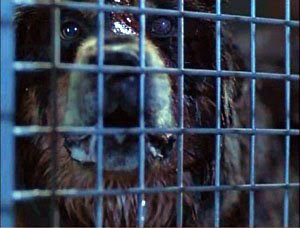 When a reporter looking for inside information on vivisection and animal testing begins to investigate EMAX labs, she gets a lot more than she bargained for. Ally Sheedy stars in this film as the reporter, Lori, who takes in escaped lab animal Max, a seemingly lovable Tibetan Mastiff that had been subject of genetic therapy experimentation at EMAX. It soon becomes apparent that Max is not quite all that he seems. Smart enough to open doors and flush toilets, able to climb trees, and viciously protective of Lori, Max will tear apart anyone who gets in his way. This tale warning of messing with the nature of genetics and condemning animal research ends on a sad note, with the unfortunate animal loyal to his rescuer until the end.

One more for the cats…
The Cat from Hell, Tales From the Darkside

In this horror vignette adapted by George Romero from a Stephen King story, a hitman takes on the case of a seemingly neurotic wealthy old man who wants a cat eliminated. Rich on pharmaceutical proceeds gained from the torturous vivisection deaths of five thousand cats (perhaps some of our favorite midnight snack Hugo’s leftovers?), the old man, Drogan, seeks to escape his punishment from the evil cat by putting a price on its head. The hitman takes the job, assuming Drogan to be a fool, but soon learns that the tales of the cat’s growing body count were all true. The vignette culminates in the unfortunate hitman being gruesomely clawed to death from the inside out. Guess the cat really got his tongue!

Last up for the dogs…
Cujo the St Bernard, from Stephen King’s Cujo

Our old pal Steve is back with one more killer creature, this time in the form of a massive St Bernard named Cujo. The friendly pet falls victim to the bite of a rabid animal, and as the disease turns him viciously insane, he attacks and kills anyone who crosses his path. Enter the hapless Donna, played by horror film vet Dee Wallace, and her young son Tad (Danny Pintauro), and the film develops into a battle of wits and brute force. The horrifying spectre of the massive animal relentlessly attacking the mother and son is burned into the psyche of horror film fans everywhere. Cujo is clearly the grand master beast of pet horror cinema!

So which side wins? It’s all a matter of what scares you more. Big bad dogs with fangs and intelligence are a force to be reckoned with, but so is a cat who will dive down your throat and claw its way into your gullet – from the inside! Whichever worries you more, always remember: they are both everywhere. Keep on eye on your neighbor’s new pup, and watch out for the stray cats on your block. You never know when they might turn on you!