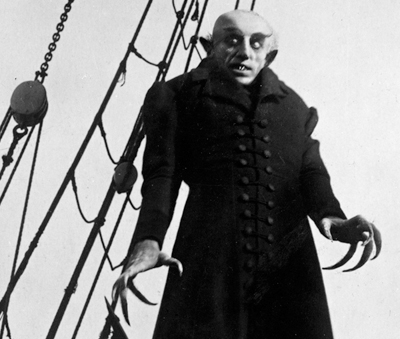 I have no problem admitting that I love vampires. There has always been something alluring and just a little sexy about the idea of a sinister and ever-youthful blood drinker stalking the shadows. The stories and legends of the vampire in its various and sundry forms have haunted our dreams and nightmares for literal millennia; it seems that nearly every civilization has some form of this creature embedded in their myth and lore. So of course, once the advent of film was upon us, vampires were quick to take center stage.
From the earliest shadowy motion pictures to today’s modern violent gorefests, vampires have been an enduring part of cinema. What I’d like to do here is take a look at some of the standout examples of vampires on film, to try and get a better understanding of what it is about them that seems to draw us all in by taking a look at some of the pinnacle films of this genre, starting with the earliest years of cinema.

Often noted as the first vampire film ever made, Vampire of the Coast is, sadly, one of many films lost to the ages. Though some brief summaries exist, it is unknown as to exactly what the film was about. Given the era, it would have been a silent film. 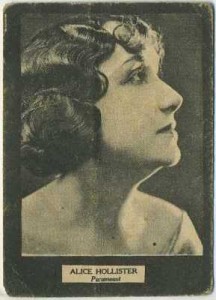 A rare gem, this film is still said to be in existence, though I have had trouble locating a copy. What makes it seem especially interesting is that as one of the earliest known vampire films, the creature in question is female, played by Alice Hollister who, in a interesting twist of fate, had just a year previously played Mary Magdalene in a religious themed silent film. With a female vampire as a lead and apparently featuring a ‘vampire dance’, it could stand to reason that this film is one of the first (if not THE first) to portray vampirism in a sensual, sexual manner. However, once again, it is unclear as to whether this is a true vampire film, or just a titular metaphor. If anyone has a line on where this film can be found, I’d really love to see it. 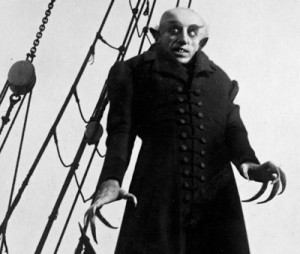 This is the first real vampire film that everyone remembers. The story goes that German filmmakers wanted to produce a film based on Bram Stoker’s novel, Dracula, but were unable to attain the rights. A few name changes – Dracula becomes Orlok, Harker becomes Cutter and the title is named for a legendary creature rather than the legendary count – and they were good to go.
There is very little to be said that hasn’t been said a hundred times before. The play of shadow and light in the film is iconic and beautiful. A far cry from the suave and captivating Draculas of later films, Max Shreck’s Orlok is a hideous creature with elongated fingers and pointed bat ears. It seems strange that such an iconic film would inspire near opposite portrayals in later adaptations; the notion of the hideous vampire creature would remain mostly unused until many years later.
Download the film in its entirety here: http://www.archive.org/details/nosferatu 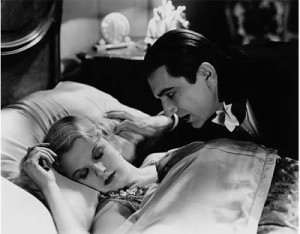 “Children of the night… what music they make.”

The 1931 screen adaptation of Bram Stoker’s novel set the standard for what most imagine a vampire – Count Dracula himself in particular – to be. Go to any store around Halloween and grab a prepackaged vampire costume off the shelf; nine times out of ten, it will feature the long dark cape, dapper white shirt and jacket that Bela Lugosi made famous in this film. Lugosi created an icon; his Dracula is more copied than any other.
This film also marks the first inexplicable rearranging of Stoker’s novel. In this, and in many films to follow, the character of Mina is rewritten as the daughter of Dr. Seward. There seems little reason for such a change, but further changes in the storyline seem to bring the reasoning more to light: in the novel, Mina not only serves as secretary to the group of men gathered to hunt and kill the Count, but also develops a psychic link to the vampire that allows them to track him. This filmic version of Mina – the first in what would become a long line – is instead rather helpless and completely underneath the evil Count’s thrall. The implications are startling: women in film, it would seem, are not made to fight monsters — at least not yet.
The film would go on to spawn several films commonly accepted as sequels, including Dracula’s Daughter in 1936 and Son of Dracula in 1943, though the role of Dracula himself is played occasionally by John Carradine rather than Lugosi. 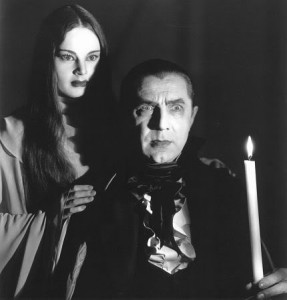 Bela Lugosi once again takes up his cape and portrays a vampire in this remake of a lost 1927 silent film, London After Midnight. Lugosi stars as Count Mora who, with his daughter Luna, is a suspected vampire, sought in the death of a local nobleman. In contrast to many of Lugosi’s horror films, the supernatural aspect here is played down in favorite of a mystery/intrigue feel. Rumors persist, more than 80 years since the film’s release, that much of the film had to be cut out due to incestuous overtones between the Count and his daughter, another early play at sexuality as a key component of vampirisim on film. 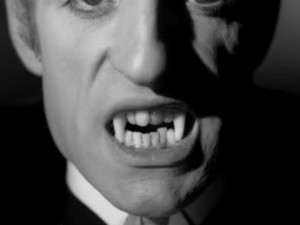 This Spanish-language film is most notable for the long-lasting effect it has upon vampire portrayal in later films. Where Nosferatu’s Orlok bore pointed incisors and Lugosi’s Dracula never showed any pointed teeth at all, El Vampiro’s Count Lavud is the first to appear on screen with long, pointed canine fangs. Apart from that, the film is another retelling of the same basic tale, this time with the evil Count arriving in a small Mexican town. 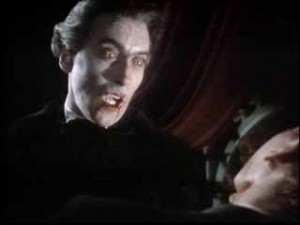 Christopher Lee takes up the black cape in this Hammer produced adaptation of the Stoker novel, sometimes titled as Horror of Dracula. Again, the original novel is cut to bits and rearranged for the film, this time leading to Jonathan Harker being turned and staked early on in the film and the rest of the plot centering around Arthur Holmwood and his wife Mina. Christopher Lee would go on to make several more Dracula films and, like Lugosi before him, is often viewed as iconic in the role.
Up through the 1950’s, many of these films were retooled versions of the Dracula story, or newly written sequels to the same. Though there were some new stories – such as 1959’s Curse of the Undead, which brings vampires to the American Old West – most followed the basic formula that had been plotted out by Stoker. With strict laws regarding obscenity on the screen, the gore and intense sexuality often found in more modern vampire films had not yet reached the public.
In my next article, I’ll look at the changes brought to the genre with the advent of the somewhat less strict 1960’s and the exploitation films of the 1970’s. Till then, keep your crucifix handy and your water good and holy; night is falling and there’s something lurking in the shadows…
What early vampire films are YOUR favorites?