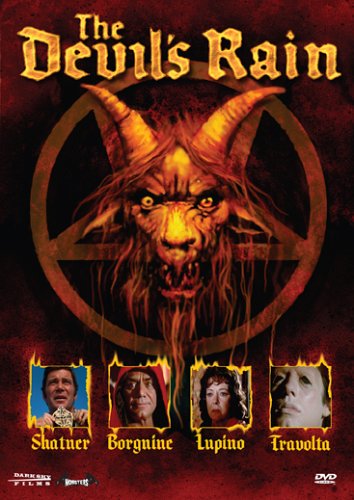 Tom Skerritt and William Shatner star as brothers, alongside Ernest Borgnine as a Satanic high priest. The film opens to the prototypical dark and stormy night; Mrs. Preston (Ida Lupino) sits nervously by the window, watching the raging storm and awaiting the arrival of her husband and son, Mark, both caught out in the storm. Finally Mark arrives, but brings with him no relief. Soon out of the dark arrives Mr. Preston, a soulless, eyeless creature and stands melting (yes, melting) in the rain as he warns: Corbiss waits for them in the desert, and he wants the book. And so the story unfolds. 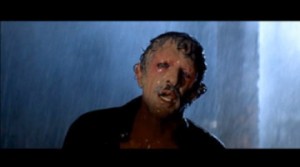 The Preston family has in its possession a centuries-old book that contains the names, written in blood, of people who had pledged their souls to Satan through Jonathan Corbiss’ (Ernest Borgnine) intervention. Corbiss cannot present these claimed souls to Satan without having possession of the book itself. When Mark discovers that his mother has disappeared, he sets out to return the book in exchange for her soul, confident that his faith in God will protect him. No such luck.
As if watching William Shatner swaggering around in a cowboy hat and flannel weren’t amusing enough, his over-pronounced expressions of shock and horror upon meeting scores of eyeless Satanic brethren are entirely laughable. The best part, however, is when he starts to scream in a high-pitched girlish tone, leaving the viewer to hope for his sake that it was dubbed in from some young woman’s screams. When it becomes clear that Mark hasn’t quite saved the day, younger brother Tom (Tom Skerritt) swoops in with his pretty psychic wife Julie (Joan Prather) to finish the job.
The effects are laughable, even for such a dated film. Ernest Borgnine’s transformation into ‘Satan’ is hysterically funny as the respected actor dons the visage of a dirty, hairy goat. The title’s ‘devil’s rain’ is presented as a large gaudy glass vessel containing the tormented souls of the fallen, seen screaming and flailing about wildly in a heavy rain through clear window pan: a shakeable decorative snowglobe of the damned, if you will. The large population of melting brethren look like a combination of molten wax and melting ice cream. 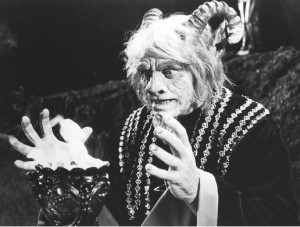 As if Shatner’s western chic attire isn’t enough to throw this film over the top, viewers are treated to another more amusing costume: that of a pilgrim, from the ponytailed hair right down to the knee breeches. The entire ‘flashback’ sequence is ridiculous, full of under-talented actors putting on overdone accents and dialogue too heavy on thees and thous to seem even vaguely realistic, as well as a poorly constructed back-story and hideous overacting by Borgnine.
A few particular notes of interest are the appearances of John Travolta in a very minor roll and – quite surprisingly – a supporting role as a high priest by none other than Anton Szandor Lavey, the founder of the Church of Satan. Tom Skerritt manages a believable performance in an unbelievably bad film, and a surprise twist ending would have done very well, had the rest of the movie not been so bad. This is one of those films that had great potential, but lost out due to a bevy of circumstances: bad casting, bad writing and really bad acting. While definite fodder for a better remake, the original isn’t worth watching, unless you’re looking for a good laugh.
Or just want to see if William Shatner really does scream like a girl. (Seriously. He does.)
The Devil’s Rain (1975)
Starring: Ernest Borgnine, Tom Skerritt, William Shatner, Ida Lupino
Director: Robert Fuest
Writers: James Ashton, Gabe Essoe, Gerald Hopman
Studio: Bryanston Distributing Company
Rated: PG