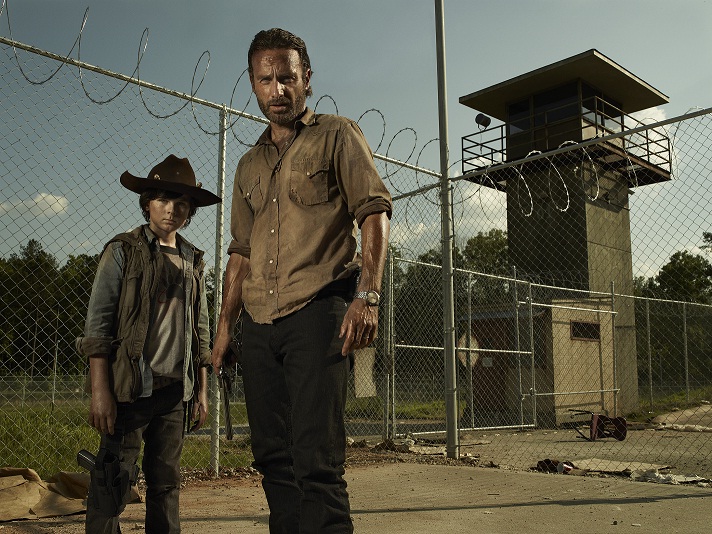 Well, I apologize for not recapping last week. My computer bit the dust. But I’m back with this week’s recap of “Arrow on the Doorpost.” Be warned, ahead lies VERY detailed spoilers. 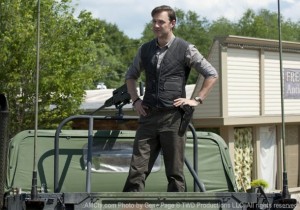 Merle tells Michonne she knows he’s right. “Folks here are strong, good fighters. But they ain’t killers.” She tells him he’s wrong. Rick is a killer. Maggie is too. And even Carl put down his own mother. He asks her if she’s coming with him or not. He tells her she can “show gun the governor’s ass” and he’ll take care of the rest. “You’re on your own. You get people killed, it’s on you,” she tells him.
Glenn is outside watching the walkers again. He turns to see Maggie emerging, carrying a gun.  She says it’s her watch and he tells her he’s got it. She she asks if she can keep him company. “It was a hell of a chokehold,” he tells her, referring to her grabbing Merle before. “When we got back from Woodbury, I made it all about me. You needed your space,” he tells her. She says she didn’t need space from him. She just wanted him to see HER. She says she’s always with him. He apologizes and the two embrace. He tells her he loves her and they kiss. He tells her he can’t do this and looks out at the horde of walkers. They duck inside and quickly get undressed.
The governor is waiting for Rick’s answer. “I don’t get it. You’ve obviously got big plans,” Rick tells him. He asks him why he’s risking it all over a two-bit vendetta. “Killing Michonne? Sorta beneath you, don’t you think?” The governor says Rick could save his son, and his daughter, and everyone he knows. “It’s your choice,” he says. “If I give you Michonne, how do I know you’ll keep your word? That you’ll stop?” Rick asks. The governor sits forward. “You can have everything you want. I told you, I don’t care about you. You think about it.” The governor says he’ll give him two days and he’ll see him at noon. Everyone packs up to leave, and Andrea climbs in the truck with the governor and the group from Woodbury as the groups head their separate directions.
The groups arrive back at their locations.
The governor tells Milton to keep an eye out and when Michonne shows up, kill the others and leave her alive. “That way we avoid a slaughter,” the governor tells him. Milton points out that IS a slaughter. The governor says they’ll have to kill Rick sooner or later, there’s no way they can exist together. He moves over to talk to Andrea, thanking her for setting things up. He tells her he and Rick agreed to terms and they should know soon. She asks what kind of terms and he simply smiles.
“So I met this governor,” Rick says, back inside the prison. “Sat with him for quite awhile.” Merle says Rick should have killed him when he had the chance. “He wants the prison. He wants us gone. Dead.” Rick looks around at his family. “We’re going to war.”
Rick stands outside, holding onto the fence. Hershel comes out and stands beside him. “The group’s taking it as well as can be expected.” He says Michonne and Merle think they should strike first. That he and Carol thinks they should hit the road. “He gave me a choice. A way out,” Rick admits. He tells Hershel that he wanted Michonne. But that he would kill the rest of them anyway. “But what if he doesn’t? What if this is the answer?” Hershel asks why he didn’t tell them. “They need to be scared.” Hershel says they are. “Good, cause that’s the only way they’ll accept it.” Hershel says Michonne saved most of their lives. “She’s earned her place.” Rick agrees. “Are you willing to sacrifice your daughters’ lives for her?” Hershel asks why Rick is telling him. “Because, I’m hoping you can talk me out of it.”
The camera pans over to the perimeter fence and the walkers, and then fades to black.

Did you watch tonight’s episode? What did you think? Comment below, or follow me at @WalkinDeadAngie on Twitter! I want to hear your reactions!
“The Walking Dead” (2010)
Starring: Andrew Lincoln, Norman Reedus, Laurie Holden
Creator: Frank Darabont