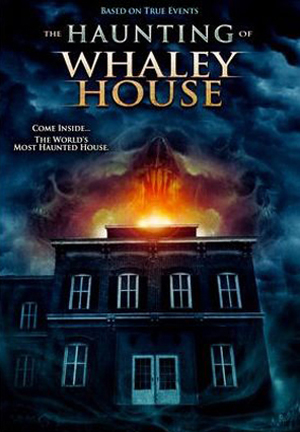 If you’re looking for a good haunted house movie, The Haunting of the Whaley House is…not going to be it. Probably. I sat down to watch this movie on Netflix this afternoon, excited to come across a scary movie I hadn’t heard of or seen AND that had three and a half stars. Now that I’ve seen it, I seriously question how it received that last star and a half. Be aware, if you’re planning to see this movie, there are brief spoilers in this review, though not very detailed ones. 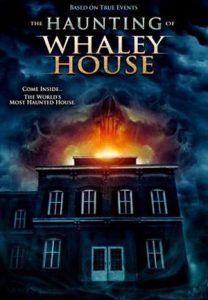 The main character, Penny, is a tour guide and med student that shows people the house and tells the stories of the various ghosts that inhabit the place. During a routine tour, one of the tourists claims that the house is “haunted as fuck” and falls to the floor, foaming at the mouth. This understandably disturbs Penny, who talks to the other tour guide, who has been giving tours for thirty years. She gives Penny some advice: never go into the house at night, don’t damage it in any way, and don’t call the spirits out. Penny claims she doesn’t believe in ghosts. Later, as she and her boyfriend and three other friends randomly hang out in a cemetery (Um, what? Do people do this? Is this a thing now…?), they convince her to use her keys to let them into the house and take a private tour that night. 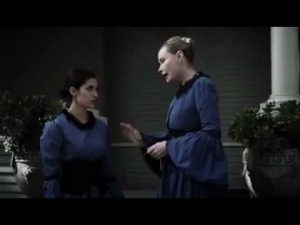 You can probably predict what happens when they get there. One by one, angry spirits begin to pick them off in ways that actually made me chuckle rather than made me horrified and scared. For example, one of the characters dies when he trips in the garden and impales himself on a waterspout. And then a cat laps at the puddle of blood.
I wish I was kidding. 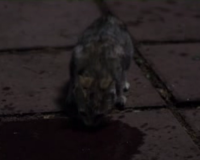 There was one scene in which a character is possessed by one of the ghosts that haunts the house. It was as close as this movie got to having an eerie scene.
While the Whaley House is an allegedly haunted house in San Diego, California, and the movie used that history for its background story, it was not scary in the least. The character deaths were predictable and cheesy. I don’t know what kind of budget the film had, but my guess is, it wasn’t much. To a degree I can overlook that. However, the acting was equally bad overall. The characters themselves, cheesy deaths aside, were whiny and annoying. 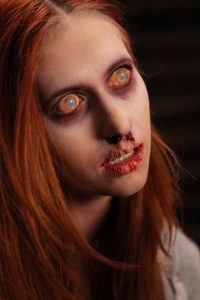 I also wish I could say there was some twist at the end that saved the movie from being a complete waste of time, but there wasn’t one to be found. In my honest opinion, if you’re looking for a good scary movie, skip this one. But if you’re someone who enjoys movies that are so bad they’re funny, by all means, tune in. I just wish I had that hour and a half of my life back to spend doing something else.  Alas, until someone invents a time machine, I am out of luck. Don’t make the same mistake I did.
Have you seen The Haunting of the Whaley House? Want to chat about it? Hit me up on Twitter at @WalkinDeadAngie!
“The Haunting of the Whaley House” (2012)
Starring: Alex Arleo, Arielle Brachfeld, and Graham Denman
Director: Jose Prendes
Writer: Jose Prendes