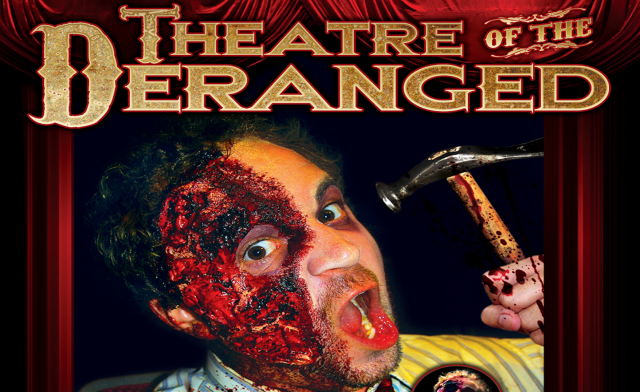 If you’re looking for something well-written and scary, then I’d stay away from this film, far away from this film. On the other hand, if you’re looking for something entertaining, over the top and you’re possibly high, then this would be perfect for you. THEATRE OF THE DERANGED consists of five short films, each made by a different indie director and introduced by ‘Andy The Arsonist’.
The first segment – LUST FOR BLOOD, was jointly directed by M. Kelly and the star of the film; Shawn C. Phillips. My initial thoughts about this piece were that it looked like a high school student’s film project; shoddy camera work, possibly the worst acting I’ve ever witnessed and a terrible script. However, as soon as I changed my outlook and watched it as a comedy, I found it to be the funniest horror/comedy hybrid I’ve ever witnessed. Reminiscent of 80s Troma films, LUST FOR BLOOD include ridiculous special effects, such as green ooze (that Philips rubs into himself almost too seductively) and spaghetti, to represent the innards of one of his victims. All in all, this short film is ridiculous, in the best and weird way possible.
Next, up was Liz Gilbert’s BAD DENNIS, a film set in rural England featuring a group of Goths on a trip to Glastonbury. Unfortunately for them, they travel during ‘cider season’ and encounter what is perhaps one of the weirdest looking individuals I’ve seen in a horror film. Not even a good type of weird, the character just looked like a man covered in grass, which isn’t very exciting at all. The acting in this short is definitely the worst out of the anthology, but at least the plot is decent and there is a bit of gore. Possibly the best part of this segment is how unintentionally funny the script is, and how the group of misfits react to their friends disappearing. Thankfully, there is a decent twist at the end which makes this very amateur film, above average.
James Cullen Bressak’s SPEAK EASY was the short that I was most looking forward to watching, and it didn’t let me down. This was definitely the most stylistic segment of the horror anthology. The first half of the film was a little slow, with two friends talking about the events of the previous night. As soon as the twist comes along however, the film takes a totally different route and there is an all out assassination, complete with a dubstep score and a shit load of blood. The two actors in this were without doubt the most qualified and most believable in their roles, compared to others in this collection of short films. This is a small, yet very interesting segment, and is one of the best.
Sadly, the next film – DOLL PARTS from Brian Dorton totally killed my mood and left me bored to death. The start of the film seemed promising, the camera work was pleasant, the actors weren’t too bad and the plot looked appetising. As time went on though, I just became more and more confused and ultimately uninterested. I can’t even remember how it ended, I was that fed up. I think the problem with this short film is that it’s feature length worthy and Dorton tried to fit too much in, in a short amount of time.
Fortunately, the anthology ended perfectly with CANNIBAL BLOOD GIRL from Creep Creepersin. The narrative was incredibly exciting and the actors that were featured were all suited to their parts. The plot is centered on a group of guys who take two girls to the place of a rape and murder that happened a few years ago. Surprisingly enough, the executed girl (played by the gorgeous Sophie Dee) comes back and kills everyone in the best way possible. Seriously, I couldn’t stop laughing, it was actually genius and reminded me of Japanese splatter horror films. I also want to give praise to Kevin E. Scott, who gave a hilarious performance and never failed to make me laugh each and every time he spoke.
On the whole, this horror anthology is a very fun watch – just don’t take it too seriously and you’ll love it.