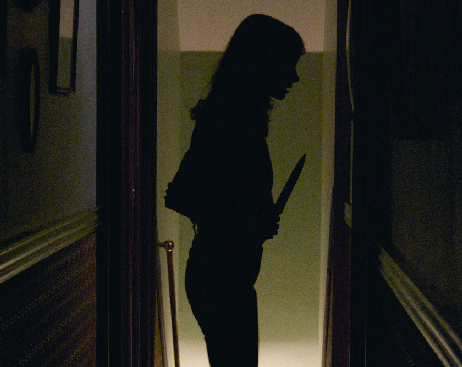 I’m not entirely sure how I became a fan of Ti West without actually seeing any of his work, so today I decided to change that with his 2009 film; The House of the Devil. Taking on the roles of director, writer and editor, he creates a film with a nostalgic feel to it. Set in the 1980’s, a young college girl called Samantha (Jocelin Donahue) decides to take up a babysitting job at a house in the countryside. Falling on the same day as a full lunar eclipse, she soon realizes that something is just not right.
The first thing I noticed about this film was how stunning it looked. Filmed on 16MM film true to real 80’s horror films, the super stylish cinematography makes you feel as if you are actually in that decade with them. Along with this, the camera work was some of the best I’ve seen in a while. Keeping with the 80’s theme, instead of using a dolly to create smooth camera movements when filming a close-up, a simple zoom was used instead. I admire this technique very much as it adds a dramatic touch to shots that don’t necessarily need them, which in the end creates a much more suspenseful atmosphere.
Aside from the cinematography, the score was equally one of the most beautiful aspects about this film. Jeff Grace creates some of the most eerie sounds I’ve ever heard within a film. With it being heavy on strings and piano, it generates a chilling ambience that matches up to the visuals flawlessly. As well as the composer, I have to give a lot of praise for the sound guys. In one scene particular in which a gun is used, they actually emphasise the gun shot with an echoing ringing sound afterwards, an opportunity upon which many many films seem to miss out. The ever-changing frequency levels and unclear visuals really make this short scene particularly realistic, which is always an excellent factor to have in a horror film.
A good hour of the film is complete build up for the final few scenes, which some horror fans do not like at all. I, on the other hand, applaud Ti West for doing this, as the character development is incredible, and crucial in a film like this that only features a small cast.
I’ve got to point out just how gorgeous Jocelin Donahue is in this film and how well she portrays Samantha. Also, Tom Noonan who plays the frightening Mr. Ulman has what is probably the creepiest voice I’ve ever heard. The only criticism I have about this film was the ending. It just left too many questions unanswered and there’s even one part where it’s almost physically impossible for it to happen. Don’t let this put you off though; this has to be one of the finest and most suspense filled films I’ve seen in a long time.