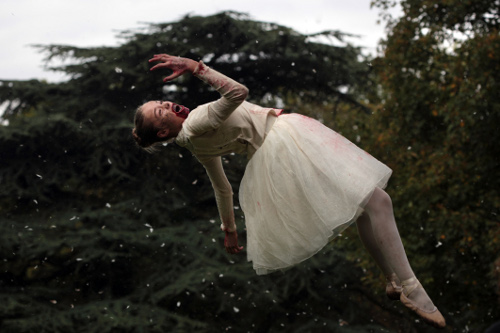 French new extremity directors, Julien Maury and Alexandre Bustillo follow up from their first horror film A l’interieur (2007) with; Livide (2011). A young girl named Lucie (Chloe Coulloud) encounters an elderly lady trapped in a coma on her first day of work as an in-house caregiver. Accidentally, she finds out that the lifeless Mrs Jessel (Marie-Claude Pietragalla) is hiding treasures somewhere in her incredibly large home. Eager to find out what is hidden, Lucie and two of her friends break into the house. Their hunt soon turns into a living nightmare, as a series of supernatural events take place that will change Lucie’s life forever.
Every single scene in this film is painfully beautiful to watch thanks to Frontiers(s) (2007) cinematographer Laurent Barès. He creates an eerie, dreamlike realm which allows the viewers to fully engage with not only the characters, but the house itself. The house is set out like a labyrinth, with many doors hiding secrets and creepy stuffed toys, although Lucie tends to take no notice of them. There is a lot of suspense in this film, and the filmmakers take advantage of this by adding in a few moments that will definitely make the audience jump. The characters are all well developed – especially Mrs Jessel, as the scenes including her are very stylish indeed. Full back stories are given to most of the characters to emphasise the audience’s response and create a good relationship between the two.
Surprisingly, there is not that much gore in the film; apart from one scene in particular that includes the consumption of brains. The film concentrates more on the paranormal beings that reside in the house and how they came about. Flashbacks are used to explain this and work very well within the narrative. The narrative is quite similar to that in Insidious (2010), as the first two thirds of film focus on the unknown, and then the rest takes the viewers to a new dimension as it is slowly pushed into the fantasy genre.Although this is a horror/fantasy film, there are lots of subgenre’s also being explored; supernatural, vampire, mystery, teen and psychological. Don’t let this put you off though, all of these combined makes a terrifying viewing experience. This film is absolute perfection in the aesthetics department and the story is not too far behind. A wonderfully eeire score and top class acting makes this a film you won’t want to miss. I would definitely recommend this film to fans of horror/fantasy films such asDon’t Be Afraid of the Dark (2011), Suspiria (1977), The Woman in Black (2012) and Let the Right One In (2008).