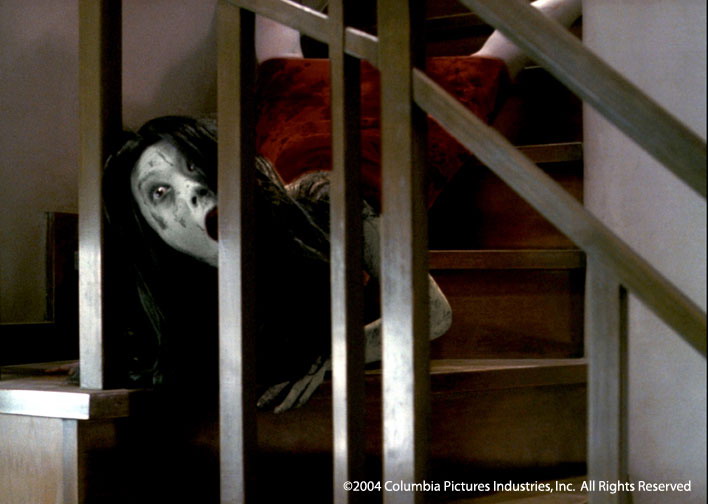 The Grudge can be easily summed up as 91 minutes of your life that you will never get back.  But, for the sake of argument, let’s go more in depth.
Following the success of The Ring, it seems only fitting that another American re-make of yet another popular Japanese horror movie would soon follow.  However, where The Ring was a passable effort, The Grudge fails in almost every way.  Told in a dizzying style of flashbacks and flash-forwards, The Grudge lacks any real cohesiveness, while the potential for a decent remake is stifled by wooden performances and dreadful miscasting.
The film opens with a message written across the screen that is meant to explain the general premise: when someone dies in a grip of a powerful rage, a curse is born… Following this written warning, the live action opening sequence is that of an early morning suicide by Peter (Bill Pullman), an act that, at this point at least, seems to have no rhyme or reason.  Without explanation, the scene immediately switches, beginning the first in a long series of rapid action-without-explanation scenes.
Quickly following the suicide scene, we are thrust into an equally incomprehensible predicament.  This scene finds Yoko (Yoko Maki), a caregiver or nurse (it is never clarified) arriving at the home of her latest charge, an elderly woman (Grace Zabriskie) who is mute, confined to her bed and seemingly abandoned in a messy house.  Distracted from her work by the sound of a mewling cat, Yoko finds herself exploring a closet in an empty room, only to be confronted by a disturbing entity with wide, bulging eyes.  Seconds later, Yoko disappears through a closet hatch, all the while screaming.
After these two seemingly unrelated scenes, the main storyline of the film begins to progress.  Sarah Michelle Gellar stars as Karen, another caregiver of some sort and American expatriate living in Tokyo with her boyfriend.  While Gellar is arguably an actress of some talent, shining as the title character in the Buffy the Vampire Slayer series and even doing a semi-decent job as Scooby-Doo’s Daphne, her talents seem not suited for this particular part.  The subtle quiet and general unease of the film seem lost on her; instead, she comes off as sluggish and distracted throughout much of her screen time.  Following a casual morning-routine sequence and a momentary outdoor scene which serves only to explain why boyfriend Doug (Jason Behr) will be carrying a lighter later on in the film, Karen makes her way to work and finds that Yoko has not turned up – Karen will be covering her schedule for the day.
In direct contrast to Gellar’s useless performance, the talented Clea DuVall is shamefully relegated to naught more than a bit part in a flashback.  As a lonely and culture-shocked American woman recently moved to Tokyo with her family, Duvall manages a believable performance that far outshines Gellar’s starring role; it seems almost as though the film would have benefited from a switch in casting, giving Duvall the bigger part and leaving Gellar for the flashbacks.  This was the point in the film where it became apparent, to me at least, as I was mentally re-casting the movie, that the film just wasn’t doing its job.
It was confusing and muddled, laughable at moments meant to be horrific and all in all poorly thrown together.  The rapid pace of jumbled scenes loses any dramatic effect it was meant to have and seems more or less badly edited.  With the heavy focus on Gellar, other talented actors were stripped of what little room for creative interpretation this film allowed.  Jason Behr was more or less a set piece, something to spur the film onward, while Clea DuVall’s potential was not realized, and Bill Pullman delivered an oddly bland performance.  The duplicate cast from the original Japanese film, Ju-on, reprised the roles of Toshio (Yuya Ozeki) and Kayako (Takako Fuki), but their admirable performances were toned down by a heavy, confusing atmosphere.  Even with a frame by frame recreation of the original by the original director, something is lost here.
Do not waste your time with this film.  Rent the original.
The Grudge (2004)
Starring: Sarah Michelle Gellar, Jason Behr, Clea DuVall, Bill Pullman
Director: Takashi Shimizu
Writer: Stephen Susco
Studio: Columbia Pictures
Rated: PG-13