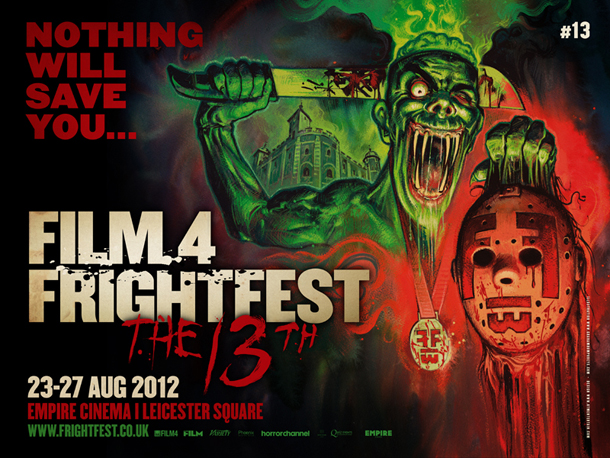 I found out last year about Frightfest (the UK’s biggest horror film festival), by accident looking up information about FINAL DESTINATION 5. I attended only the opening night due to moving house, but swore I’d go to the whole festival the next year. Like a lot of other Frightfest fans, I stayed overnight in the sleepy queue to get one of the first tickets for the whole weekend (it’s called a weekend, but its five days long). As I waited out the 15 hours, I met some awesome people who just made me extra excited for it to start.

The opening night came around so fast I couldn’t really believe it, and so the opening film of the festival was THE SEASONING HOUSE. As I was watching it the main thought going round in my head was that I didn’t want it to ever finish. The lead actress – Rosie Day was so captivating, even though she never spoke a single word. I’m totally going to keep an eye out for her in the future because she is definitely going to be a big star. What I noticed the most about the film was Adam Etherington’s gritty cinematography, it really captured how filthy and derelict the house that the film was set in was. From start to finish, this film realistically portrayed a house full of young girls forced into sex in the middle of the Balkan War, (4.5/5).

The next film up was COCKNEYS VS ZOMBIES which I’ve been so excited to see ever since I got a part as a zombie extra (which I actually didn’t end up following through, no thanks to my university timetable). From the opening scene, the film had me hooked. There are many zombie horror/comedy hybrids out there, but this one is a step above the rest. Alan Ford and Richard Briers, who play Ray and Hamish respectively, were the highlights of the film for me. The scene in which Briers is being chased by a zombie at such a minimal speed that it’s actually quite ridiculous has to be one of the best (and funniest) scenes from any zombie film ever that I’ve witnessed. What surprised me the most was the amount of blood and guts that was included, I didn’t expect there to be that much being such a low budget British film, but boy was I wrong, (4/5).

The last film of the opening night was Jon Wright’s GRABBERS. I hadn’t heard anything about this film apart from that it contained alien creatures, which I got a little excited about because there is a serious lack of new creature feature films at the moment. The first half hour of the film completely annoyed me; I don’t think I’ve seen such an annoying actress as Ruth Bradley and it just felt like a drama film, rather than the horror/comedy it was supposed to be. As soon as the aliens started causing havoc I seemed to get into the film a little bit more, although the aliens didn’t look very interesting at all – literally just giant fish. The scenes explaining how to be protected from the creatures was just plain silly, in no universe would a pint of beer make humans intolerant to them. The whole film just didn’t do anything for me; if it wasn’t for Richard Coyle’s drunken character then I don’t think I could have finished it. (2/5)

The first film of Friday was HIDDEN IN THE WOODS, a Chilean thriller from the mind of Patricio Valladares. I wasn’t expecting too much from this film ever since I read it revolved around a drug lord and the spiralling events he caused. Just as I anticipated it didn’t interest me too much and I even fell asleep halfway through. The plot was the main problem as it kept switching between a horror and a crime film; the horror parts of it were the only saviours of the film. Thankfully the two lead actresses – Carolina Escobar and Siboney Lo who play sisters gave credible performances, and most of their scenes contained incestuous abuse or cannibalism. This is the type of film to disturb an audience, and they definitely succeed in that, they just needed a better script. A far better script. (1/5)

Next up was the film that I’d been looking forward to ever since it was first announced – V/H/S. This found footage anthology is without doubt one of the best horror films I’ve ever seen, and the first film to actually scare me at the festival. Split up into 5 short films, each of which takes a different subgenre of horror and manages to represent them all flawlessly. AMATEUR NIGHT by David Bruckner starts off as a teen thriller which then moves into the creature feature genre. SECOND HONEYMOON contains a mysterious girl, seemingly stalking a young couple at their motel after spending time at a Wild West themed attraction. Alike with his previous films, Ti West sticks to his distinctive style of filmmaking by making sure his short was filled tension to really keep the viewers engaged. The next short was my favourite out of the lot; Glenn McQuaid’s TUESDAY THE 17TH. A group of friends mix reality with fantasy as they all go exploring in the woods whilst getting high. They come across a killer who on screen looks very abnormal indeed; he is covered with technical glitches because he has the ability to hide himself on camera. Not only did this mysterious entity fit perfectly into the slasher subgenre, but it actually creeped me out quite a lot. It had the perfect blend of ambiguity and eeriness. Following that beauty was THE SICK THING THAT HAPPENED TO EMILY WHEN SHE WAS YOUNGER by Joe Swanberg, a chilling tale of a woman’s haunted apartment. The best part about this short was that it was solely shown as a Skype conversation and you only saw what the characters saw. The twist in this one was definitely one of my favourites I’ve ever seen in a horror film, the ending of it was very daunting and certainly prepared me for the next short. 10/31/98 by Radio Silence was sadly the final instalment of the anthology which showed a group of guys going to a Halloween party, which actually turned out to be a legitimate haunted house with an exorcism taking place in the attic. The special effects used in this were wonderful, especially as it was made to look very low quality. All in all, this film was definitely my favourite of the whole festival; every horror fan needs to see this as it brings a nostalgic feel to the genre. (5/5)

Another film I was looking forward to watching a lot was REC 3 directed by one of the two original directors of the franchise – Paco Plaza. Instead of being set in the building filled with the original virus, it’s taking place at the wedding of two new characters. The virus going around is still as prominent though, since it turns the majority of guests into bloodthirsty creatures whose mission it is to infect everyone around them. Ultimately, the film let me down. It would have been pretty good if it was a spin-off from REC, instead of a sequel. It didn’t have the claustrophobic feel to it as the previous two did, even though it was mainly all set inside one building. Also, the changes between found footage style and normal film style really bugged me. It should either be one or the other, not both, because it really makes the viewer aware of the cameras and takes away any sense of authenticity. (3/5)