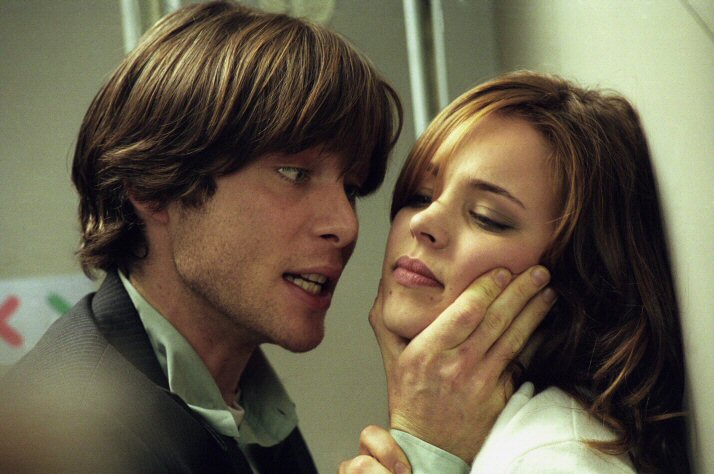 Horror movies can be terribly clichéd. The genre has, in recent years, been overrun with either PG-13 hack-and-slash routines, or over the top ultra-violent films that bank more on shock value than on real substance.  Unfortunately, the audience craving for such shlock often relegates films that try something new and different to the ‘failure’ pile, critically at least if not financially.
In Red Eye, moviegoers were treated to a new twist on an old idea.  Lisa Reisert (Rachel McAdams) is being held against her will by an evil, arrogant adversary, the same old song and dance that can be found in many horror films.  The twist?  Lisa is just one of many passengers on a flight from Texas to Miami; no one else on the plane knows of the danger, or that Lisa is being threatened and psychologically tormented by the man who sits next to her, Jackson Rippner (Cillian Murphy).
The idea itself is revolutionary: a frightened captive held in public view.  The setting is even more innovative: a late-night “red eye” flight is as inescapable as any makeshift prison and doubly terrifying in that the many other passengers have no idea that a potential killer is in their midst.  But with innovation comes problems, namely sustaining a movie whose bulk takes place in a closed setting.

The story unfolds at a rapid pace.  Lisa works for an elite hotel in Miami, which will soon be playing host to a high-ranking government official.  Rippner needs her assistance to put the government official in a position where he and his family could be easily taken out; that is to say, Rippner is orchestrating an assassination plot in which Lisa must play a key role.  As leverage, Rippner has a man waiting on his order to kill Lisa’s father, the proof of which is produced by way of her father’s pilfered wallet.
Cillian Murphy shines in his role as a suave, charismatic and well-spoken lunatic, a performance he would go on to repeat as Scarecrow in Batman Begins.  The evolution of the character from the charming and kind man in the Dallas airport to the crazed killer hell-bent on finishing his job is slow and evenly paced; it is one of the more realistic portrayals of sociopathic behavior yet put on film.  It is his performance that manages to hold the long flight sequence together as a pure edge-of-your-seat thrill ride, supported, of course, by Rachel McAdam’s frightened and yet resourceful Lisa.
For her own part, McAdam’s does a commendable job as the terrorized Lisa.  Throughout the flight, the character makes several impulsive attempts to save herself, her father and the man who is in danger of assassination, each time being shot down by the increasingly creepy Rippner.
[Spoilers to Follow]
The character exposition during the flight puts into light an important part of Lisa’s motivation.  The resourcefulness she carries, it seems, comes from prior experience at being victimized.  A scar on her chest is a constant reminder of an attack that had happened two years prior; while the dialogue doesn’t go into to detail, it is inferred that Lisa was the victim of a rape.  Murphy’s Rippner sparks a rare moment of, if not sympathy, at least understanding, when he theorizes that Lisa had forced herself to believe the grim reality that the attack had not been her fault.  Lisa responds tartly with what had been the driving force behind her many attempts at foiling his plot; she had promised herself “that it would never happen again”, and drives her point home by stabbing Rippner in the throat with a pen secreted away from another passenger.
The greatest problem with this film is the ending, though the vaguely clichéd and anticlimactic end would not have been awful if not for one solid fact.  Lisa had, throughout the film, shown her resourceful and the strength.  Victimized once, she had vowed to never let it happen again, and manages to channel that energy and both foil the assassination plot and save her father from certain death.
Why, then, can she not save herself from the rampaging Rippner?  Lisa had proven herself more than capable throughout the film, through her several attempts to notify other passengers of Rippner’s intent, as well as getting word through about the assassination plot in the nick of time and stopping the impending murder of her father. And yet, even after firing a gun once at Rippner and hitting him, she still nearly succumbs to violence at his hands, only to be saved… by her father.
The ending of the film in its own right wasn’t great, but the exhilarating moments that are heavily peppered throughout the film would be more than enough to raise this innovative film to the ranks of horror royalty if it hadn’t fallen to terribly flat in the final moments.  Why play up the female-empowerment idea if not to follow through?  Instead, it strikes a blow on the side of Rippner and his early speeches about “male-based, fact-driven logic”.  While clearly not a treatise on feminist ideals, the film still would present one of the better examples of a strong heroine if not for the oddly uncharacteristic ending.
They may as well have had her running through the woods and tripping over her high heels.