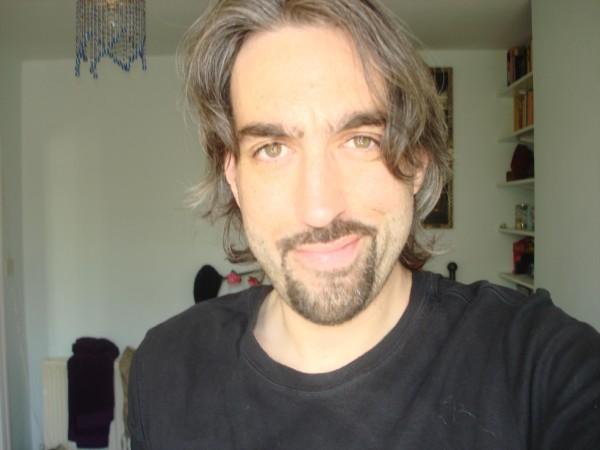 Paul Hyett is best known for his makeup/prosthetics work within the world of horror. Working on some of the biggest films such as; THE DESCENT (2005), EDEN LAKE (2008) and DOOMSDAY (2008), he has built up an astounding and strong portfolio of work. More recently, he has made his directorial debut with the film THE SEASONING HOUSE (2012), which premiered at Frightfest Festival 2012 as its opening film. In Sickkgirl’s top films of 2012, she named his debut as #4! (see here) 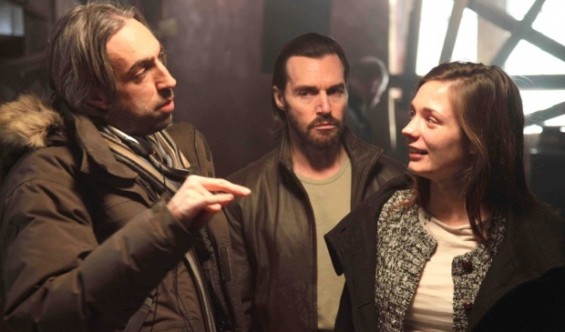 Paul (left) on the set of THE SEASONING HOUSE

SG: What made you want to go into prosthetics and makeup for films?

PH: A childhood spent watching movies, especially horror movies. I rememeber being totally blown away by films such as ‘American Werewolf in London’ and ‘The Thing’, and I loved sculpting and painting. And thought making creatures and the cool gore effects in movies like ‘Friday the 13th’ and ‘Nightmare on Elm Street’ would be a really fun job. And it was!

SG: Which film did you gave the most fun doing the make up for?

PH: It hard to choose one, but my two top favourite films I’ve done were ‘Doomsday’ and ‘Gallowwalkers’. Doomsday, aside from working with Neil Marshall which is always a pleasure, we were shooting in Cape Town for twelve weeks, which was a lovely experience, and everyday there was a decapitation, arms being chopped of, people being squished by tanks, virus make-ups a plenty, just seemed like I was doing so many different types of effects and make ups on a daily basis. And Gallowwalkers because we were in Namibia for four months and we did some really cool make ups, skinless cowboys, lizard men, face flayings, the list went on. I always say, if you’re shooting in a nice warm country, doing really cool make ups on a well budgeted movie with a nice director and a friendly cast and crew, what more could you want? 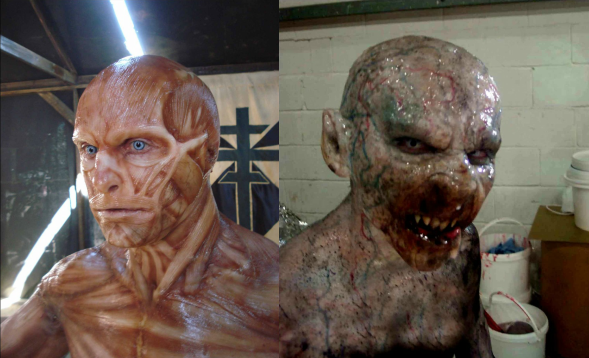 Paul’s prosthetic and makeup work on GALLOWWALKERS and THE DESCENT

SG: Neil Marshall and Paul Hyett is a formula that always guarantees awesome horror, can we expect to see you guys team up again?

PH: I’m positive myself and Neil will be teaming up again in the future to wreck some horror on the world.

SG: Did Neil pass on any words of directing wisdom before you made THE SEASONING HOUSE?

PH: Neil was incredibly supportive throughout the process of The Seasoning House,  especially on the editing side. He’s had so much experience, and it sometimes takes another director (and especially with Neil’s experience) to point out things that you don’t see as you’re so close to the material.

SG: How did you find the whole experience of directing, since it was your first time?

PH: I enjoyed it immensly, it’s definitely what I want to do now. I found it to be a very exciting process and wonderfully creative. I can’t wait to get into the directors chair again. 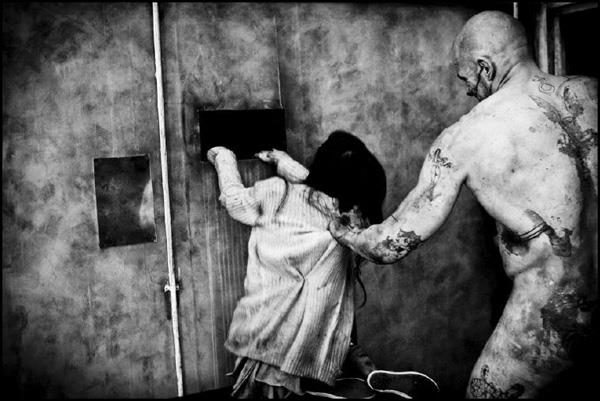 Still from THE SEASONING HOUSE

SG: Where did the idea of THE SEASONING HOUSE come from?

PH: A writer friend of mine Helen Solomon, had an idea for a mute girl, living in a brothel that travels through the walls and strikes a friendship with another girl. I took that and structered what I would do with the idea as a full length script. Once I had in my head what sort of take I wanted to do on the story, I wrote the first fifty pages in ten days then brought in my writing partner Conal Palmer to help finish it, fleshing out the story, characters, dialogue etc.

SG: What were you influences whilst making THE SEASONING HOUSE?

PH: The main infulences were ‘Martyrs’, for its unfliching brutality mixed with its beautiful style, very intelligent but harrowing at the same time. And ‘Pan’s Labyrinth’, for its beautifully dark fairytale nature, with its touching humanity, and the bleak horrors of war.

SG: How long did it take to find the main actress – Rosie Day?

PH: It took a long time to find Rosie, we initially saw 130 girls, and I think we found Rosie in the last ten, so by that time I was panicking, wondering if we were ever going to find Angel. But thankfully she came in and absolutely blew us away with her audition. Pretty much as soon as she left the room, I knew it was going to be her! And she was incredible all the way through shooting. She braved freezing cold temperatures, harness rigs, being thrown about in huge fight scenes. She really was a trooper, and never complained once. An absolute joy to work with. I was very lucky with an amazing cast. Sean, Kevin, Rosie, Anna, Dominquie and all the other cast, really worked so hard and brought an amazing energy and vibe to the film. 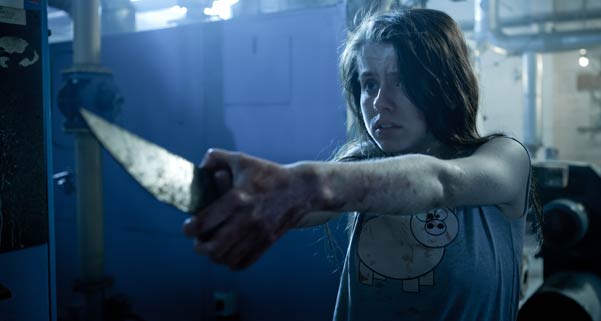 Rosie Day in THE SEASONING HOUSE

SG: How did you choose Adam Etherington to be the cinematographer for the film? In my opinion, it was some of the best cinematography I’ve ever seen.

PH: I looked through a lot of showreels and spoke to a lot of cinematographers, and Adam really got what I wanted with this film. I didn’t want to particularly shoot it as a horror, I took a lot of influence from things like ‘Crimson Petal and the White’ and ‘Red Riding 1974’, beatifully shot pieces of work, I always wanted that slow, fairy tale like, almost opiated feel to the first half, I wanted it to be unique and different and we looked through a lot of references and lighting styles to really work out what we wanted it to look like. He was great. He’ll go very far.

SG: When making THE SEASONING HOUSE, how was not being directly involved with the makeup/special effects departments? Did you feel that you wanted to help out more with that, or as the director, you had enough involvement as it was?

PH: To be honest, I was a bit too involved and probably got on peoples nerves as I was so specific about little details and would sometimes pick up a brush and say ‘This is what I want’ etc. Although it was helpful when shooting complicated effects scenes, as I knew exactly how to shoot them and all the elements that were needed, but sometimes you got to let people get on with their jobs. And as a director you need to trust in everyone’s skills and guide them to what you want as an overall vision. 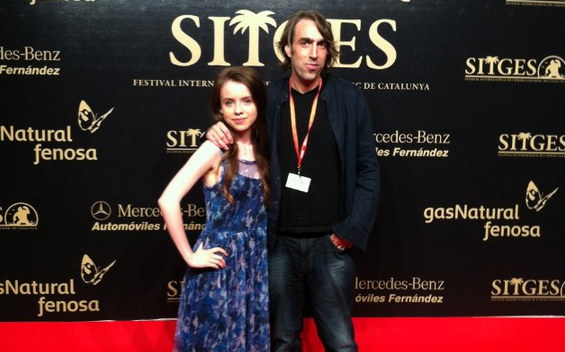 SG: Do you have anything planned for the rest of this year and are you able to tell us a little bit about it?

PH: Hopefully will be announcing my next project very soon.

SG: Can you name your favourite sub-genre of horror and give a few titles of some films from it?

Thank you for speaking to us Paul, we wish you the best of luck in your next projects! 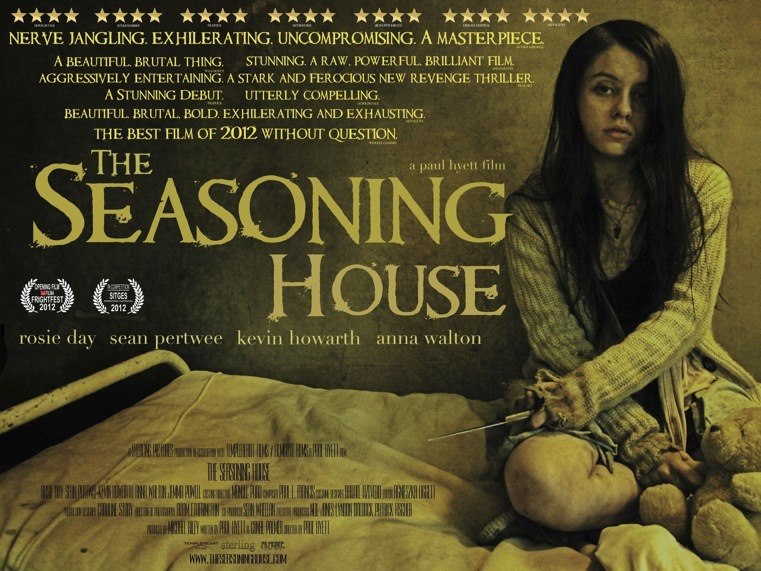 Poster for THE SEASONING HOUSE