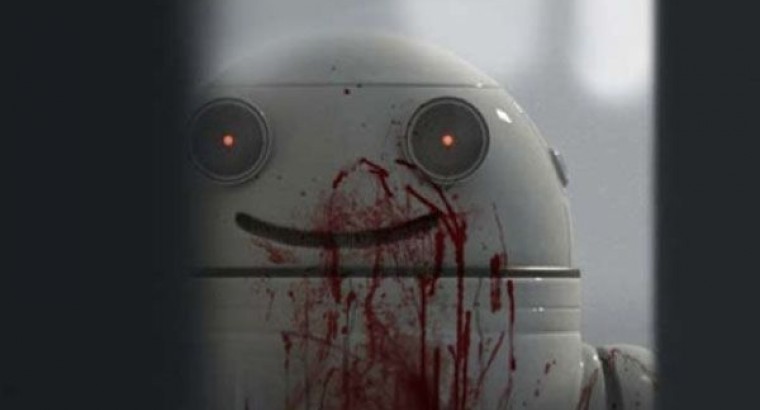 I have always had a fondness for short films, as they can be conjured up by almost anyone, and they are easily accessible via YouTube and other video-sharing sites. BlinkyTM is a sci-fi/horror short about a boy named Alex who obtains a ‘helper robot’ as a Christmas present after seeing an idealised advertisement on TV. He hopes that Blinky will be able to stop his parents from arguing, and help recreate the loving family he once had.
The storyline sounds very generic; it’s about a boy who wants a friend to talk to after being neglected by his parents. Yet with a fairly straightforward plot line,  Ruairi Robinson – a completely unknown director – has managed to create a truly gripping short film that has taken its rightful place on my list of ‘top sci-fi/horror movies’, despite the fact it has a runtime of a mere 13 minutes. I found it to be just as good as the likes of Alien (1979), for the manner in which it testifies as to how terrifying advances in science and artificial intelligence can become.
The tone of the film changes from cheerful to downright horrific quite quickly; it doesn’t take very long for Alex to become bored of his new friend, and when he realises it hasn’t stopped his parents from arguing at all, he soon sees Blinky as a burden and no longer wants him to be around. Ironically, he begins to neglect his robot friend in the same way as his parents have neglected him, and things take a turn for the worse. He starts making conflicting demands that confuses Blinky and causes him to shut down. However, when Blinky reboots, only one of Alex’s demands stayed in the robot’s mind.
BlinkyTM is one of the best short films I have ever seen. The visual effects are simple but effective, and it doesn’t try to overdo the gore. Interestingly enough, Robinson had a limited budget for BlinkyTM, none of which went on the special effects. Yet somehow, he still managed to produce this masterpiece. The film is as long as it needs to be, it is the right length to keep the audience glued to the screen for the entire duration. It is almost a cautionary tale, the moral of this film being the age-old lesson we never seem to learn: be very careful what you wish for.