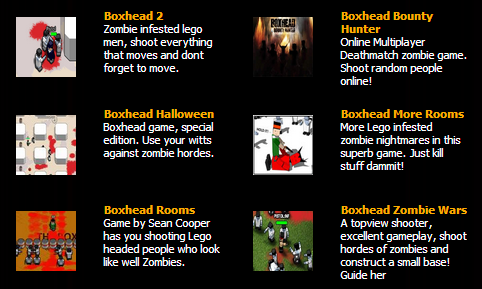 The free games site ‘666gamer.com’ hosts many horror themed games on its site, but the best games lie in the zombie section. There are 99 zombie games that can be played online, and only take a few seconds to load up. Some of them are great (CURSE VILLAGE 2) and some of them aren’t worth the time it takes to load (LETUM).
SPRINGFIELD CEMETARY was the first game I played, mainly because I’m such a humongous Simpsons fan. Sadly, the game let me down – the graphics were great, but that’s about it. You have to shoot ten zombies (by shooting them) to win the game and it took me under a minute. Not to mention the sound clip of ‘scary music’ that is played in the background that only lasts about 5 seconds, before it replays itself.
ZOMBIE LAND was an extremely fun game, consisting of retro video game graphics, flame throwers and zombies in wheelchairs. RESIDENT EVIL was very similar to the majority of the games on the site, but you only get one life, and when you die, you have to start from the beginning. It’s only fun for about 5 or 6 turns. EXMORTIS 2 was most definitely the worst game I played on the site. It starts off with a really long intro and game credits (which you can’t skip), then you have to click around the game to move into different rooms. The second room in the game was a confessional box, and there was some dialogue form a character (that you also couldn’t skip), that took around a minute. I gave up on this game after that.
The BOXHEAD series consists of 6 different games, all pretty similar in the aim of the game and graphics, but it’s the setting and weapons that differ from game to game. BOXHEAD HALLOWEEN is my favourite from the six, as the setting is in a quite large neighbourhood, this means lots of zombies. You also get to protect civilians too, and each time you level up, you get a new goal. BOXHEAD ROOMS was also a great one of the series. The first level in this one, you’re on a bridge and you have to kill the zombies coming at you from the left and right. The best thing is, if you stay at one side too long, then go back to the other, there’s about 20-30 zombies waiting for you and it’s great to kill them all in one go. The characters in all six of these games basically look like they are made of Lego, which makes it more interesting to play.
ZOMBIE TYPOCALYPSE was by far the most interesting and unique game. Instead of just shooting zombies, you have to first spell out the word lingering above their heads. You can choose easy, medium or hard and the type of words you have to spell out range from pirate to moustache. I think I probably spent about an hour just playing this game. My favourite game on the site was FPS IN REAL LIFE 5. It was set out like a B-movie and even thought the graphics were extremely bad, it was fun to shoot the zombies in a real house. The game was really quick though, lasting about 3 minutes of game play, then a 2 minute video to end it.
All in all, this is one of the best gaming sites I’ve come across for free zombie games. It’s easy to navigate and there is a wide range of games to play. The majority of the games are gory, a couple are scary, but mostly – they are all enjoyable.
To play the games, use this link; zombie games