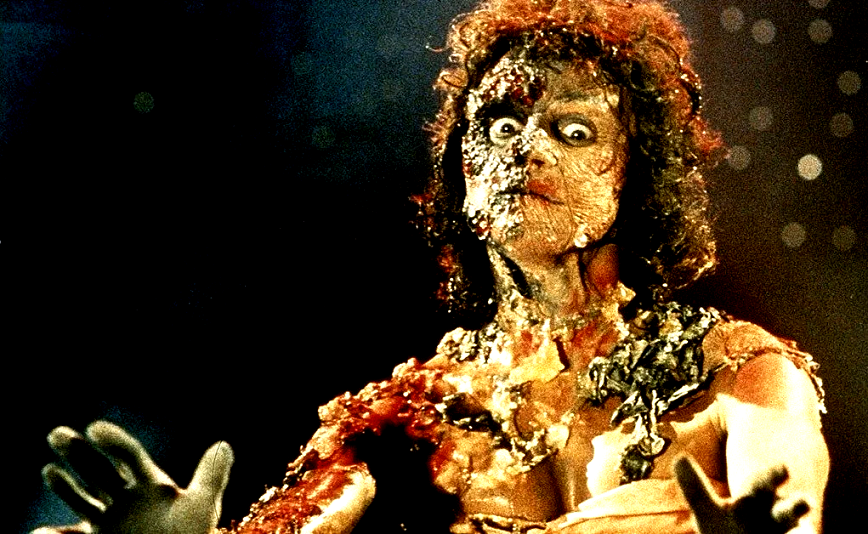 The 1970’s and 1980’s brought some of the most iconic figures to the horror genre, invigorating the slasher film and making it the much-loved subgenre that has lasted to this day. We remember all the names — Leatherface, Michael, Jason, Freddy — and we regard them as royalty. They’re everything we could ever want out of a horror villain, some charming, some funny, all of them cunning and ultimately deadly, but there’s one more thing they all share in common. Have you guess what it is yet?

Not to say that’s a bad thing. The adversarial relationship between the slasher villain and the final girl [or girls, or guys] is the stuff of legends, a well-tested, tried and true formula that doesn’t really need changing.

And it’s not like there haven’t been the occasional female slasher villain. Remember, the Friday the 13th franchise was born with Mrs. Voorhees butchering camp counselors and it’s impossible to forget the shish-kabob killer in Happy Birthday to Me, among a few select others. The difference is that these literal lady killers were all one-shot villains who saw their rise and fall with a single film, not on going on to spawn a film franchise.

So where is our icon? Where is our legendary slasher queen? Why didn’t we ever have a female killer who could live up to the lauded reputations of our masked and clawed men of slasher fame?

The truth is, we did have one; she just never got her due. Our slasher queen, the one who had the greatest potential to become an iconic slasher villain spawning a series of sequels and prequels was none other than Mary Lou Maloney, the prom queen gone flambé in Hello Mary Lou: Prom Night II. She is our could-have-been, should-have-been Slasher Queen, and here’s why it just didn’t work out.

If you haven’t seen Mary Lou’s eponymous film, let me give you the jist:

The most popular girl at Hamilton High in 1957 is Mary Lou Maloney, a bad girl with a worse attitude who has all the boys, including straight-laced Billy, wrapped around her finger. At the school’s senior prom, Billy discovers Mary Lou is cheating on him and in an attempt to get revenge, throws a stink bomb on stage when Mary Lou is being crowned prom queen. Unfortunately, the spark of the stink bomb sets Mary Lou’s dress aflame and the newly minted prom queen burns to death without ever getting her crown. Thirty years later, the relics of the never crowned queen are unearthed at the school and set to be used for the upcoming prom, only to unleash the vengeful spirit of Mary Lou upon the student body, ready to stop at nothing to get that crown, even if it means possessing good girl Vicki, who happens to be dating the son of the very boy who had caused Mary Lou’s death.

It’s fun. It’s funny. Mary Lou is the kind of girl that everyone hated and everyone wanted to be, and seeing her wreak her special kind of havoc on the students of Hamilton High is just a hoot. The special effects are decent for the budget and the era, and the storyline is inventive. The open ending made it ripe for a sequel and though it did eventually get one, it was so bad as to remain mostly forgotten. So what happened?

For starters, a money-grubbing film studio got involved. No surprises there, right? The film was originally conceived as The Haunting at Hamilton High, a supernatural horror film that was meant to be a completely new concept, if not eventual franchise. But with the success of 1980’s Prom Night, a straight slasher flick with a human villain starring a post-Halloween Jamie Lee Curtis, some moron executive from Alliance Films with dollar signs flashing in his eyes decided to slap a “Prom Night” label on it and promote it as a sequel.

A sequel to a human slasher, but with ghosts.

And literally no link whatsoever to the first film, apart from being set among high school students and centering, at least vaguely, around a prom.

Mary Lou’s film debut made no sense as a sequel and it’s not much of a logical leap to surmise that the rebranding damaged the film’s reception. Viewers looking for references to the earlier film, a dark and somewhat moody slasher, would have been disappointed with the brighter, more colorful film and its creative use of special effects. This supposed sequel would be more at home beside installments of the A Nightmare on Elm Street franchise with its interesting death scenes and colorful effects.

Labeling it a Prom Night sequel put too much of an onus on the film itself to carry on the emotional weight that Prom Night had tried to instill with its tale of sibling and untimely death.  Prom Night II is never meant to be a serious film; it’s a romp through high school glory days where the bitchy prom queen is literally evil and a wayward boyfriend is left trying to save the day.

Casting was also a bit of an issue.

Lisa Schrage is an absolute delight as Mary Lou, who even before her death is an absolute scream, writing her name and phone number in cherry red lipstick on the inside of a church confessional and living a hedonistic lifestyle during the era of faux modesty and social rules that meant for a girl to stay locked shut at the knees until she was married. She was brash and beautiful and even though you hated her, you kinda wanted to see her win. Two hours of Schrage’s hijinks could have sold the film even with the poor branding… but we don’t to see that.

As it happens, most of Mary Lou’s presence in the film is seen not in the guise of Schrage’s delightfully deviant 1950’s bad girl, but instead in the form of the possessed good girl Vicki, played by Wendy Lyon.

As Vicki, Wendy Lyon is perfect. She’s sweet and soft-spoken, often shown to be caring and considerate to her friends and her boyfriend Craig [Louis Ferreira, then billed at Justin Louis]. Her possession scenes, however, are erratic and less than perfect. The lead-up to the possession is decent enough, with Lyon portraying a clearly struggling and exhausted Vicki, but when the change completely takes over, she lacks the special sort of flair that Lisa Schrage was able to bring to the role. We don’t see Lyon playing Mary Lou rather than Lyon playing Vicki playing Mary Lou, as though she were acting a part rather than embodying the role. It’s distracting at best.

Schrage needed more screen time, more quips and one-liners, and more definite kills by her hands. It’s all good fun to see a few poltergeist-style objects moving about to off some unsuspecting victim, but when it comes to a slasher film — which this film absolutely is, in spite of its initial titling as simply a haunting or supernatural horror — we want to see the killer taking things well in hand. Kills like the locker crush scene are a lot of fun, but even those would be better presented with our dear Mary Lou walking away with some offhand joke about the murder she’d committed, rather than Lyon’s watered down intonation.

We already know that Schrage could have pulled it off; her attitude in the brief appearances she made at the start of the film are proof enough. It might even have worked with Lyon if she could have delivered her lines with a little more oomf. It’s not easy to drop all the fun out of a line like “There’s no God, Buddy! And there is no Heaven, and do you know what pissed me off the most? No fucking wings!”, but it happened.

Perhaps this was simply a directorial decision gone wrong. With Lyon amping up the innocence for Vicki, it could have easily eclipsed the piquant that Mary Lou’s possession needed. Either way, the character’s appeal was completely lost.

[I’m not even going to touch on the weird horse tongue or rampant Daddy issues. I’m not a shrink. I don’t think I’m qualified.]

When a trashy sequel was made — an actual sequel rather than a completely unrelated film with the title slapped on it for quick cash — with the role of Mary Lou recast, played this time by Courteny Taylor in a strange imitation of Winona Ryder in Heathers, it bombed completely, destroying any hope of bringing a Slasher Queen to stand beside her brethren. In the grand tradition of making absolutely no sense, a fourth Prom Night film was made that had little in it to harken back to the first three.

Mary Lou Maloney could have been something special, but studio politics and poor choices damned her to b-movie cult status. Her image on the film’s poster may be iconic, but she never had the chance to live up to her full potential.

Will there ever truly be a Slasher Queen? We can only hope.