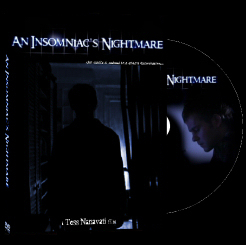 In An Insomniac’s Nightmare, writer/director Tess Nanavati details the slow spiral into madness brought on by the effects of insomnia. The idea for the short film itself seems almost revolutionary. With the horror genre filled to the brim with things that go bump in the night – the monsters, vampires, demons, haunts and crazed killers we see so often – it is refreshing to see a film without a villain. The film instead introduces the deadliest of foes: the human mind. This is simply a man alone with his own tired, tortured brain.
Dominic Monaghan (The Lord of the Rings, Lost) stars as Jack, the title’s insomniac, as the film follows him through what is obviously one more in a string of tortuous sleepless nights. The short bouts of actual conversational character dialogue are few and far between; the majority of the film is colored with voiceover by Monaghan, which helps to pull the viewer further into the ensuing madness. You are not meant just to see what is taking place, but to experience. The voiceover monologue itself is superb: “It’s not just hallucinations any more. It’s much, much worse. But you can’t move, because you can’t wake up, because you’re not even dreaming yet”. This type of hopelessness and fear edge each line and each scene, leaving the viewer unsettled and as unable to relax as the film’s titular sleepless man.

While at first, the film seems disjointed and confusing, it takes only a few moments to understand the need for this type of editing. Rather than simply relying on Jack’s monologues about what insomnia is, we get a firsthand look at his suffering as hallucinations flow one into another, before snapping back to a harsh reality. Children appear and disappear. The night switches to daylight and back again. A lost friend (Daniel Burke) shows up for a visit and Jack converses with a dog in the park, all the while never really leaving his apartment – never really living.
Imprisoned by the insomnia, Jack is in constant fear and dread, unsure of what is real and what isn’t. This leads to one of the most haunting images in the film, a striking shot of Jack’s darkened silhouette as he stands on the ledge of his building’s roof, the early morning sun rising against the skyline behind him. It is filmed in such a way that there is an aura of calm and peace, in spite of the dangerous threat of a suicide jump.

Make no mistake, this is not a major studio film, and its production reflects the lack of a big ticket budget. The camera quality is not great at times, and unlike The Blair Witch Project, the poor quality doesn’t add much to the overall feel of the film. Also problematic are the child actors employed for the film; the dark subject matter seems slightly out of their reach,  with their interpretations of their small roles falling as somewhat distracting and easily able to pull a viewer out of the dark web that Nanavati has woven. Monaghan, the only big name attached to the project and better known for his portrayals of more affable characters, does an impressively good turn as the hopeless Jack and, with it, redeems the other problems plaguing the film.
Overall, An Insomniac’s Nightmare is an imaginative and truly disturbing departure from the more generic horror film. While some great potential was lost in the low budget and short running time (only 31 minutes), it is still a great effort. This is a film that could have set a new standard in psychological horror, had it only garnered better distribution and a full-length feature script. It is definitely a short film not to be missed.