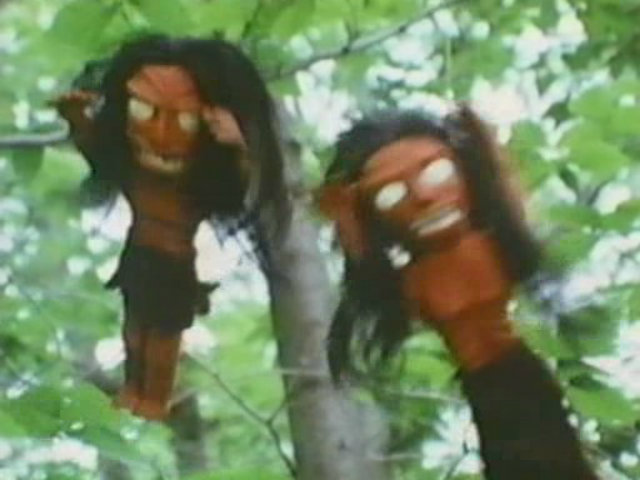 One of my most important traditions of the year is the horror movie I watch to kick off the start of a brand-new movie-viewing season. Not just any movie, however; a horror movie. Why? Well, I am a big horror buff if you haven’t noticed by now, and whenever I think of a specific year, I always go to the first scare flick I saw of that year. It sets the tone for things to come, and serves as sort of a starting point for future reference when thinking of movies viewed this year. Last year I choose The Being, and while it wasn’t bad, it wasn’t very memorable either. But the only reason I still remember it is because it was the first of 2012. It’s a pretty big decision as well; it’s got to be something I haven’t seen before, and something not terribly atrocious so I don’t start the year on a bad note. But which one should I do? I weeded through Scream for Help, Honeymoon Horror, Murder Obsession, and even considered watching Nightmare Weekend until I found the right one. And as it started, the angelic sound of synthesizers began ringing in my ears and that classic title card popped up and burned into my pupils, and I knew I had made the right choice.

ATTACK OF THE BEAST CREATURES (1985) Review

Sometime in the 1920’s, a ship sinks in the middle of an unspecified ocean, leaving the survivors adrift at sea. However, their raft floats onto a mysterious and seemingly abandoned island. They head off into the endless expanse of jungle, lacking food and water and encountering bizarre threats, like an acid river, and worse yet, the inhabitants of the island. Not people; killer tiki dolls angered by the intruders and ready to fight! As they find their numbers dwindling due to the tiny terrors, the group must find a way to destroy these freaks of nature and get off this island before they all become beast creature chow!

Everything about this movie oozes stupidity. Case #1: the title. “Beast Creatures?” Case #2: the plot. You remember Trilogy of Terror, right? And if you remember that, you obviously remember the Zuni fetish doll chasing Karen Black around her apartment.  Just imagine more people, more dolls, and stretched out over 90-minutes with a quarter of the budget (of that one segment; not the movie as a whole). Case #3: the lead actor’s mustache. Honestly, what’s not to like about all that? But, as they say, execution is everything, so does Attack of the Beast Creatures pull it all off? Well, as much as it possibly can under the circumstances. Then again, the chuckles provided by the synopsis can’t support the entire movie. Shot in Connecticut with a low, low budget, you can tell that it was fun to make and fun to shoot (and they obviously put their heart into it), but in the end, it’s really nothing but an alright time waster.

The biggest problem with this movie is the abundance of dull filler everywhere. I can handle one or two scenes where people just walk around, but this is just ridiculous. It seems like every other scene consists of our gang of survivors wandering aimlessly around the jungle, and the beast creatures attacking every so often. That’s the movie: walking, beast creatures. Walking, beast creatures. Walking, beast creatures, end. No real rising action, no climax, and no real falling action. Everyone you expect to die dies, and since you know there’s no way they’re going to find a way to destroy this entire of race of monsters populating this island (nor could the filmmakers afford to), there isn’t any anticipation for the end. There are multiple instances when I came close to dozing off (granted, I did watch it at one-in-the-morning), and by the end, I just didn’t care at all. There isn’t even any cool gore to make up for it (aside when someone sticks his face in an acid river; that was pretty cool).

Thankfully, the film is almost saved by the enjoyableness of the good portions. There is, of course, the cheesy charm permeating all aspects of the movie, as well as the warm feeling that some film buffs actually made an effort to create something, if not great, but enjoyable. As a sucker for killer doll movies, the idea of an island (which may be my favorite horror movie setting you can have) populated by killer tiki dolls is one I automatically fell in love with from the get-go. The monster effects are terrible, as one would expect, and don’t be surprised if you bust a gut laughing during some of the attack scenes. Some of the characters were actually likable and entertaining (the ridiculously pessimistic old guy was a stand-out), even if most were forgettable. There are also some instances of creativity, like the aforementioned acid rivers on the island, and that kept things interesting for a little while, but beyond the acid river, there aren’t any other neat touches. If they had continued with the trend of creative dangers on the island (how about some giant venus flytraps?  Or even living tree roots?), this would be a lot better than it is today.

For the first horror movie of the year, I could have done worse. All in all, I’d say Attack of the Beast Creatures initiated the New Year rather well, and is one I may find myself watching again in the future, and with full knowledge of its slow portions. Yes, it does have an unnecessary amount of walking scenes, but the movie has enough hysterically cheesy parts to compensate for it. Everything about it is equal parts atrocious and incredibly earnest, and 98% of the time, that’s a winning combination. As of yet, it doesn’t have a DVD or Blu-Ray release (nor any plans for one), but its cult following is slowly snowballing, so I predict it will get one in the near future (with a collectible tiki doll figure included, if there’s a God). It’s one I’d pick up if it wound up in the $5-10 bin, but don’t be reaching for your wallet to purchase an over-priced VHS.
Despite a plethora of shortcomings, you really can’t help but enjoy Attack of the Beast Creatures. It’s a classic case of horror fans trying their hardest to do some good, and while the end result isn’t terribly memorable, their effort alone is worth a viewing.