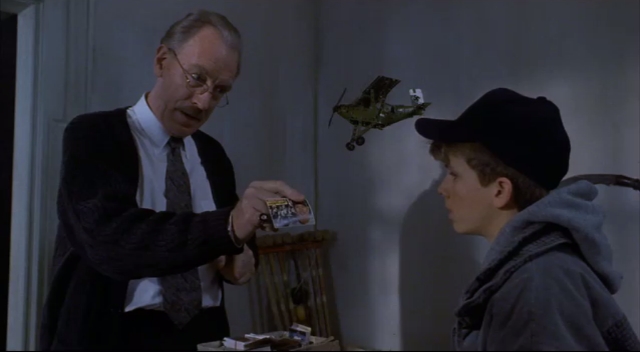 Like most horror nuts, I am a fan of the works of Stephen King. The Shining and IT are two of the scariest books I’ve ever read, and while he does have a tendency to stretch plots beyond their stretching point and he can sometimes be a little too descriptive, I’m consistently entertained by his works, although in the King universe, his books are either really good or pretty mediocre. The general consensus on his 1991 conclusion to the “Castle Rock saga,” Needful Things, is that it’s one of the latter. However, after finally reading it, I must say it’s one of my favorites of his. It’s definitely not a scary book, but it’s a wildly entertaining one with some fantastic characters, unsettling moments, and a crazy finale. After reading it, I also thought, ‘Man, that would make one kick-ass miniseries!” Now, the same “either it’s great or it’s mediocre” policy can apply to King films, with, unfortunately, more falling in the latter than the former. So when Needful Things was made into a 2-hour movie, my heart sank a little. But hey, it stars Max Von Sydow and Ed Harris, plus Charlton Heston’s son directed it, so it shouldn’t be too bad…right?

The sleepy town of Castle Rock, Maine in the past has had to deal with such problems as a rabid dog, a murderous twin, a psychic teacher, and more, so no one bats an eye when a new shop opens in town called Needful Things and run by kindly old Leland Gaunt (Von Sydow). The shop is a curio shop of sorts, where the residents of the town seem to find exactly what they want. Even better, the items come at bargain basement prices, but with a catch. Each buyer must in turn play a “harmless” prank on another Castle Rock citizen. You see, Mr. Gaunt is not a man, and he’s using his wares to heighten pre-existing tensions in the town to explosive climaxes, resulting in a mounting body count and mass chaos. Only Sheriff Alan Pangborn (Harris) recognizes the danger and sets out to put a permanent “closed” sign on this demonic store.

Why is it that when an 800-page King novel such as The Tommyknockers is compacted into a 3-hour miniseries we get a less-than-desirable product, but when a similar 800-page novel like Needful Things is crammed into a 2-hour movie, we get one of the best King adaptations yet? Yes, Needful Things surpassed my expectations for a 1990’s Stephen King movie (What is this? A budget??? Production values???), all thanks to a long series of increasingly good decisions. One of the best choices was bringing in newcomer Fraser Clarke Heston as the director. Heston not only gives the film a much-needed polished look absent from lower-quality movies from this time period, but he also completely gets it. He knows the material isn’t anything scary, and he just has fun with it while also trying to keep some of the book’s unsettling parts. Another great part is the music selections. The composed music is rightfully ominous, while the other music selections fit perfectly (the film’s use of “In the Hall of the Mountain King” and “Ave Maria” is spot-on).

But the best choice of all was the casting. You see, this might be the only book adaptation I’ve seen where every character is cast impeccably. Needful Things is a character-driven novel, and the movie keeps all the best character traits and translates it very well to the screen. Max Von Sydow is astonishingly good as Gaunt, easily cementing him as one of the best King antagonists in memory. The dude’s so charming in the beginning that you can’t not trust him, even if you already know what he’s up to. I mean, look at this guy with his silver hair, glasses, and sweater! No way this guy’s going to end up destroying a town and stealing everyone’s souls. Ed Harris is equally good in the protagonist role who’s your average small town sheriff but isn’t afraid to go up against the forces of Hell. Everyone else is completely serviceable and succeeded in bringing some of the best characters in the book to life. And hey, William Morgan Sheppard, who played Alexandru in another great book adaptation, The Keep, is in it as the Catholic priest.

Several of the key scenes from the book, especially a catfight involving knives, play out surprisingly well off the page (even if that fight wasn’t nearly as bloody as it was described in the book) and writer W.D. Richter manages to bend details from scenes without losing the overall sense of fun. Speaking of, Richter, who also penned the wonderful Big Trouble in Little China, also throws in some great dialogue that wasn’t in the book, with it all culminating in a final verbal fight between Pangborn and Gaunt that may even be better than the infamous climax of the book. And Harris and Von Sydow really are something when they’re on screen together.

Ah, I can’t just talk about this movie without making comparisons to the book, and there are a lot of differences. I like how Heston didn’t try to cram every single character from the book and only used the really important ones, except for one. Ace Merrill. Yeah, the bully played by Kiefer Sutherland in Stand By Me played a huge role in the book and he got the shaft in the film. A shame; can you imagine Max Von Sydow, Ed Harris, and Kiefer Sutherland on screen together? Phew! Some other things changed that weren’t for the better is the scene in the book where a character commits suicide that I found really haunting. In the movie, it’s not as chilling because not only does the character survive the attempt, but the actor really overplays the scenes leading up to it. And then they make the death of the dog ten times more brutal, and that just wasn’t cool. Plus, while in the book Alan and Gaunt don’t meet until the end, here, they encounter each other almost immediately, which lessens the climax a bit. They also dumbed down the role of Norris Ridgewick, probably my favorite character in the story. But all in all, the amount of material that is in the movie is a good amount.

I don’t find myself really liking Stephen King movies too often, but this is a rare one that I find to be highly enjoyable. I know fans are just as split over this movie as they are over the book, but with my low expectations, I had a ton of fun with it. Maybe I’m just over-polishing a turd, but I found a lot of enjoyment within the film’s 2-hour runtime. Yes, the book’s well-handled messages about how greed distorts our views and good ol’ caveat emptor are pretty much lost, but this is still a very entertaining popcorn flick with some awesome actors, a good helping of gore, great characters, entertaining dialogue (“That’s not the devil! It’s those goddamned Baptists!”), an engaging villain and hero, and a whole lot of explosions. That works for me. MGM gave it a decent DVD release a while ago with nice picture and a trailer (which does a good job of encapsulating the feel of the movie). Another cut of it exists with another hour of footage that aired on TBS and TNT whiles back with some more character development and such. It’s a cut I’d like to see released, but even as it stands, this is still one fine film.
Comparisons to the novel aside, Needful Things is a nutty, entertaining, and highly explosive ride that you’re either on board with or not. It won’t hurt you to give it a shot…I mean, you won’t lose your soul over it or anything.