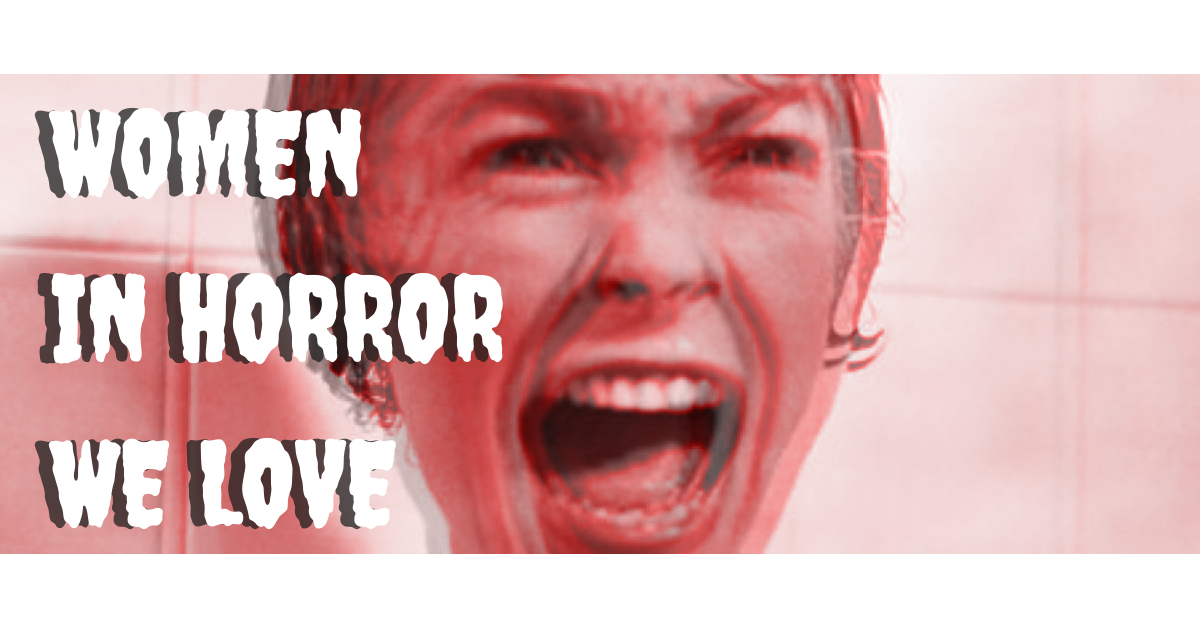 I have a bit of a love/hate relationship with Women In Horror Month. The primary reason is that while I love the idea of supporting and showcasing the accomplishments of women creators in the horror genre, at the end of the day it irritates me that they are considered so rare or so unlauded that it becomes necessary to have an entire month singled out to recognize them. I’d love it if women were viewed as more prevalent in horror outside of the stereotypical roles usually assigned them (Screaming Bimbo #1, etc), but for now, I suppose I can just continue to do my small part in shouting out the praise that many so richly deserve. And, as per usual around here, it’s coming a bit late. Because that’s how we do.

With that in mind, I’d like to spotlight a few of the women in horror who I personally admire. As with most listicles on the internet, this is not comprehensive and is based entirely in my own opinion. Remember that line about opinions — everyone has one…?

If anyone in the history of horror has every fully embraced the title of Scream Queen, it’s Linnea Quigley. Starring in dozens of horror films since the mid-1970’s, Quigley is not only a fan favorite but a clear fan of the genre herself. She’s basically horror’s happy-go-lucky cheerleader, and we love her for it. It’s not just her acting that has made her a longtime fan favorite; Quigley is also a musician, recording as guitarist with The Skirts as well as other bands throughout her career. She’s also an author and model, as well as a vegan activist, and even had a horror-themed ‘workout’ tape. She’s worked steadily over the years and can be found even today on the convention circuit, all the wile maintaining her film career with six new films in pre-production as of 2020.

How can you not love the Twisted Twins?

Jen and Sylvia Soska burst onto the horror scene in 2009 with Dead Hooker in a Trunk and seemingly have not stopped since. The Canadian twin sisters soon wrote and directed American Mary, a full-length feature film spotlight body horror through a feminist lens and with a twist on body modification. Outspoken and exceedingly driven, the sisters has used their position in the horror world not only to raise awareness of blood donation causes, but also to speak out on the problems of abuse and sexual exploitation in the film industry long before it became a Twitter hashtag. Recently, they offered a phenomenal run of Marvel’s Black Widow comics and helmed the reimagining of David Cronenberg’s Rabid to great success! Honestly, we cannot wait to see what they do next!

It happens sometimes that history erases the accomplishments of talented women, be it by design or accident. This has clearly been the case with Milicent Patrick, a hugely talented artist whose contributions to the horror genre were only recently brought to light with Mallory O’Meara’s 2019 biography, The Lady from the Black Lagoon. Unbeknownst to many, Patrick was the artist who created the iconic head-mask of the titular Creature from the Black Lagoon, the 1954 Universal classic horror film. She was the first woman to work in a special effects makeup department, following a career in animation at Walt Disney Studios, where she designed Fantasia‘s winged devil-creature, Chernabog. It seems that jealousy from the famed Westmore family in Hollywood put a damper on Patrick’s career and recognition for her accomplishments, but thankfully we know now all she did to further the artistry of practical effects. Who knows what other nameless women in Hollywood have suffered this same rewriting of history?

Go with me on this one.

Jada Pinkett-Smith isn’t exactly known for her career in horror. Most people these days will recognize her from Fox’s Gotham series or recent films like Girl’s Trip. That being said, Pinkett-Smith has had a few pretty iconic turns not only in horror, but also in sci-fi. The opening kill of Scream 2 featured Pinkett-Smith in a brutal attack that played out its finale in front of an audience unsure if the bloodied woman standing before them was a victim or a publicity stunt, and she has also featured in two Matrix films with a role on the docket for the fourth film as well. But what really stands out is her role in Tales From the Crypt: Demon Knight.

Even now, roles for women of color in the horror genre seem few and far between, still often relegated to the ‘best friend of the final girl’ type positions that we’ve seen done to death. Demon Knight places Pinkett-Smith in the role of the reluctant final girl herself, Jeryline, who survives a hellish night of demon attacks only to find herself the new champion and protector of an ancient relic. Pinkett-Smith’s dynamite role that escapes most of the stereotypical trappings applied to women of color in the genre is enough to make her one of our favorite women in horror.

There should really never be a list about women in horror that doesn’t include Ida Lupino. She began her career as an actress in the glamour age of Old Hollywood and just as soon found herself on the other side of the camera, writing and directing The Hitch-Hiker, a film with a clear influence on later slasher classics, as well as episodes of supernatural and darkly themed television serials such as Thriller and Alfred Hitchcock Presents. With Hollywood still a bit prickly about handing directing duties over to women, the fact that Lupino was behind the camera as early as 1949 is a huge accomplishment, breaking a few glass ceilings along the way. Though her skill as an actress is laudable, it is her behind the scenes work that should be remembered in the horror genre, and not just her face-melting role in The Devil’s Rain!

Of course, this is a very short list, and there are so many women out there who have contributed to the genre that we love that we just couldn’t possibly name all of them. We’d love to know your favorite notable names!