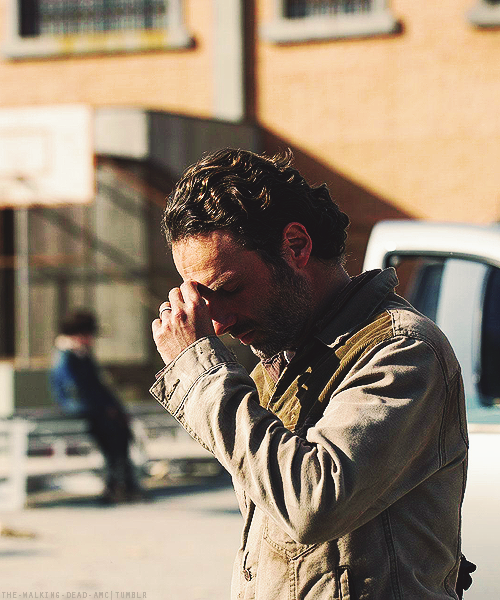 I’m so not ready for this season to be over. And this episode was intense. And rough. If you missed it and you don’t want to be spoiled, do NOT continue reading because MAJOR spoilers lie ahead. 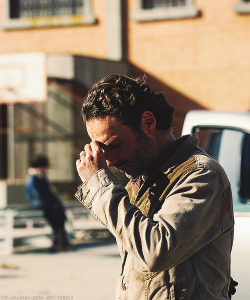 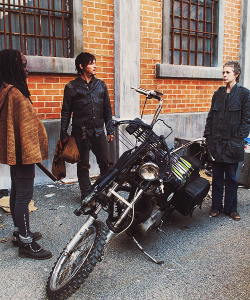 The governor and his men pull over on the road. He isn’t pleased they are running away. They aren’t cool with going back to kill Rick and his men. He begins killing his own people, gunning them down. Martinez stares at him in shock. Every one of them is dead but Martinez, another man, and the governor. He starts shooting the victims in the head to make sure they don’t turn into biters. One young woman is huddled under another body, alive. He doesn’t shoot her.
Andrea is still trying to maneuever the pliers with her feet. “Are you still here? Are you still alive?” she whispers. This time Milton doesn’t respond. She almost grasps the pliers in her hand but drops them, looking nervously at Milton, and then trying again. This time she manages to grab them. Milton’s bloody fingers begin to move.
Rick, Michonne, Daryl and Carl are preparing to leave. Rick kneels down in front of his son. “Hershel told me about the boy you shot.” Carl says the boy had a gun. “Was he handing it over?” Carl says the boy had just attacked them. “Yes he had,” he agrees. “Was he handing it over?” Carl won’t look at him for a moment. He says he couldn’t take the chance. He didn’t kill the walker who killed Dale. And Rick didn’t kill Andrew, who came back and killed his mom. And he was in a room with the governor, and the governor killed Merle. “I did what I had to do.” He drops the badge on the ground and tells him to go, before the governor kills anymore of them.
Glenn tells Rick that he and Maggie are staying, and if the governor comes back, they’ll hold him off. Daryl leads the way with Michonne and Rick following in the truck. Daryl stops his motorcycle in the middle of the road as they come along all the Woodbury people who are dead, and those who have become walkers. They kill the walkers, looking around in shock. The woman who was hiding shows herself in the truck and raises her hands above her head as they let her out.
Andrea realizes that Milton is starting to come back to life. She quickly works with the pliers, trying to get the handcuffs off. He lumbers toward her as she manages to get one of her hands free. She screams as the camera closes in on the door trapping her inside with him.
Rick, Michonne and Daryl are creeping up on Woodbury with Karen in tow. They exchange gunfire with Tyreese and another. Karen yells that the governor killed everyone. “We’re coming out,” Rick yells, putting his weapon away and holding his hands up. Daryl holds his hands up, too, approaching Tyreese and his sister. “What are you doing here?” Tyreese asks. “We were coming to finish this. Until we saw what the governor did,” Rick explains. “He killed them?” Tyreese asks. Rick tells him Karen said that Andrea hopped the wall, but she never found her way back to the prison.
Rick leads the way to the same place the governor had been holding Glenn and Maggie. They open the door. Michonne rushes in. Andrea is on the floor beside the door. Milton is dead, but Andrea has been bitten on the shoulder. She asks about Carl and the others, if they’re alive. “It’s good you found them,” Andrea tells Michonne, who is crying. “No one can make it alone now,” Andrea says. “We never could,” Daryl tells her. “I didn’t want anyone else to die,” Andrea says, then says she can do it herself. Michonne protests, but Andrea insists. “I know how the safety works,” she tells Rick jokingly. “I’m not going anywhere,” Michonne informs her, still crying. Andrea looks up at Daryl, then back at Rick. “I tried,” she whispers. “Yeah, you did,” he whispers back. Daryl leaves the room, and so do Rick and Tyreese. Michonne remains at Andrea’s side, tears trailing down her cheeks. The camera focuses outside on Rick and Tyreese and Daryl as a single gunshot is fired. They all look down.
Daryl  leads the way back into the prison, with the truck and now a bus following behind.Carl and Beth and Carol come outside as the bus slowly unloads the rest of Woodbury. “What is this?” Carl asks his dad. “They’re going to join us,” he tells his son. Carl heads away. The Woodbury survivors head into the prison, leaving the rest of the group outside. Rick looks up at the bridge over the prison, but doesn’t see Lori this time. The end shot focuses on the cross on her grave.
My thoughts are scattered and emotionally I am all over the map. Did you watch the episode? What did you think? Leave me  a comment here, or tweet me at @WalkinDeadAngie!
“The Walking Dead” (2010)
Starring: Andrew Lincoln, Norman Reedus, Laurie Holden
Creator: Frank Darabont