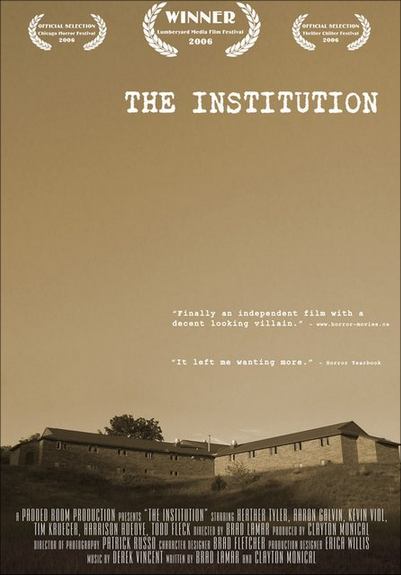 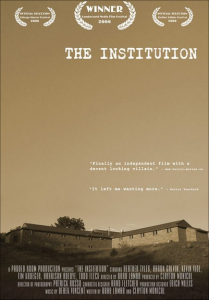 “The Institution” brings nothing new to the horror genre. Much of the plot and premise are standards of the horror industry: an abandoned asylum cut off from civilization, a legendary killer, a small group of twenty-somethings with lives entangled and an intriguing back-story. Throw in a few splashes of blood and you have a standard horror plot. That being said, it’s not necessarily a bad thing for a film to follow this formula – which “The Institution” proves without a doubt.
What must be understood from the start is that this is not a full length film. Rather, it is a fourteen minute short based on the script of a full-length feature entitled “The Assignment”, which had originally been meant for a later production, but sadly never made it to film.
A trio of what appear to be criminal forensics investigative students head off on their final class assignment, assessing a cold case for clues on a remote Michigan island. Their particular case is chosen by one of the group, Kate (Heather L. Tyler), who has a personal connection to their drama: a member of her own family is the only surviving victim of a notorious killer who had escaped from the remote asylum they visit, and presumably then gone on a killing spree. Once arrived at their location, the trio soon finds more than they came looking for: a sheriff’s deputy, badly injured, strapped to an operating table, and a straight-jacketed killer running amuck.
This set-up is nothing new, but it is done stylishly and with a decent premise; rather than the clichéd reasoning of earning a large amount of money by a night spent in the haunted house and the like, the three students have an actual reason to be spending time at the old asylum. Even the main characters are fairly standard stock: pretty girl Kate, love interest Bryan (Aaron Galvin) and wise-cracking fellow student Jonathan (Kevin Viol). The mystery element is nearly maddening, as the viewer is told very little about the murders that had happened before, why the deputy is even on the island, or the basis of Kate’s connection to the case. Whether this is purposeful or just a byproduct of an abysmally short film is up for debate.
The length is a real issue. Trying to pack so much into fourteen minutes can’t be easy, particularly when gleaned from a full-length script, and it comes across in short choppy scenes that serve only as passage for set-up dialogue. That being said, the film still manages to get its point across in such a short time. The setting at the asylum itself leaves little to be desired, carrying with it the standard graffiti – some of it fairly strange, such as “RIP The Boxcar Children” and what appears to be a quote from T. S. Eliot, as well as a crucifix and a smattering of red hearts – and medical equipment left to waste.
“The Institution” marks a return to the horror films of past, that weren’t forced to rely on shocking gore and horrific torture to give fans the chills they crave. Short though it may be, it is definitely worth a watch – and gives the impression that the intended full-length film, “The Assignment”, would have been worthy of an audience.
Watch “The Insitution” at the link below.
http://terrorfeed.com/index.php?id=short-theinstitution
“The Institution”
Starring: Harrisson Adeoye, Todd Fleck, Brad J. Fletcher, Aaron Galvin, Tim Krueger
Director: Brad LaMar
Writers: Brad LaMar & Clayton Monical
Studio: Padded Room Productions
Rated: Not Rated