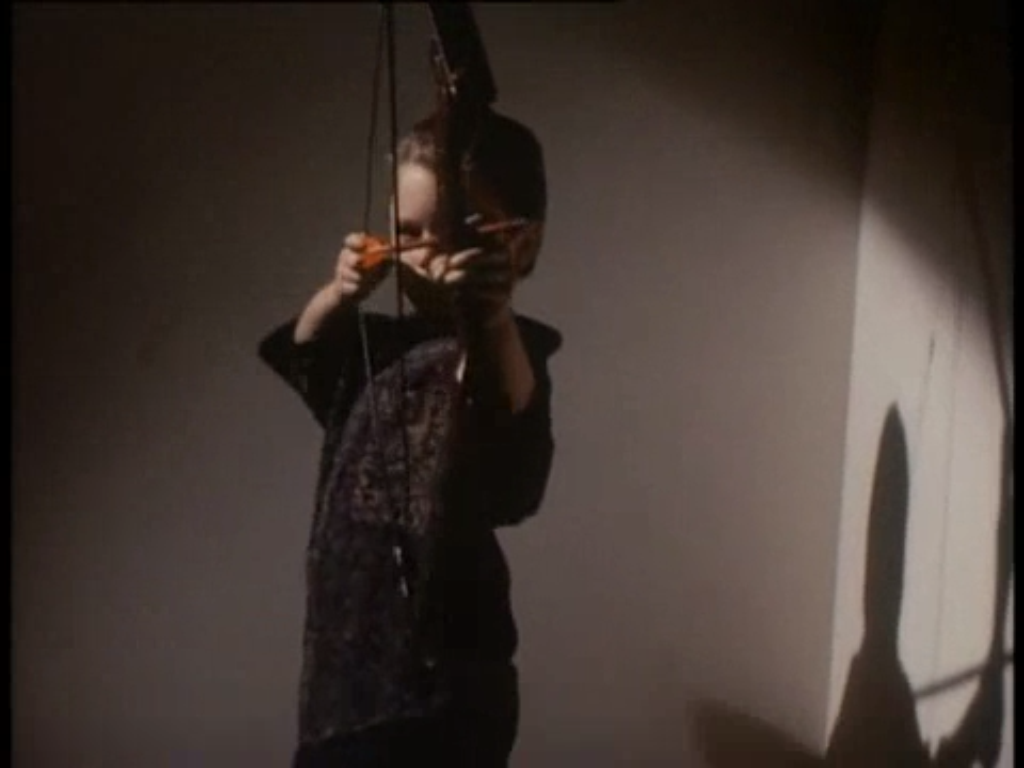 For a type of horror film that’s been around for so long, you’d be hard-pressed to find someone with a deep respect for killer kid flicks. There are some decent flicks where the murderer(s)’s height barely reaches knee-level, like Children of the Corn and Child’s Play. The latter of those two seems to have been what really sparked intrigue in this kind of movie, with both killer doll movies (Dolly Dearest) and killer kid movies following in its wake to try and ride its coattails to fame. And if a name like Chucky could have mass-appeal, why couldn’t a name like…

A family is dead; the daughter drowned in the swimming pool, the mother fried in the bathtub with a plugged-in hair dryer, and the father brutally bludgeoned with a baseball bat. The lone survivor of the slaughter, 9-year old Mikey (Brian Bonsall), is adopted soon afterwards by the Trentons, a happy couple excited to be parents. Mikey’s eccentric behavior goes noticed by teacher and family friend Shawn (Ashley Laurence), who does some digging into Mikey’s past and discovers the horrifying truth behind the murders. Can the family be saved before they too are victims of the wrath of Mikey?

Of all the slashers I’ve seen, Mikey may rank up there with the likes of Chopping Mall and Blood Tracks for sheer absurdity. Okay, maybe it’s not as ridiculous as those two movies, but it’s still pretty unbelievable how stupid this movie can get. It opens up on a pretty disturbing note as Mikey makes his little sister drown in a swimming pool while looking on with a stone cold gaze like the cold-blooded mofo he is. The bathtub electrocution isn’t as bad, but the beating of the father is also quite brutal, if a tad unrealistic. It’s all played completely straight too and might trick people into thinking they’re in for a really disturbing ride. And at times, Mikey is disturbing. And other times, you won’t be able to stop laughing. The kills all vary throughout the movie and as stupid as some of them are (apparently, a marble in a slingshot is the equivalent of a bullet), you have to give the writer credit for creativity. The acting’s all solid with a lot of familiar faces from nineties TV, and even Ashley Laurence from Hellraiser as Shaun.

Let’s just dive right into the character of Mikey himself. If you’re looking for a horror villain to hate with a burning passion, look no further. Mikey is definitely one of the most unlikable antagonists in any movie I have ever seen. Mikey usually gets compared to The Stepfather a lot, so I’m going to use that comparison now. In The Stepfather, whenever the Terry O’Quinn character wasn’t being homicidal, he kind of seemed like an all right dude to invite to your Memorial Day barbecue. In Mikey, there isn’t a moment where you don’t want to throw Mikey into a furnace. When he’s not killing people, he’s doing some hardcore brown-nosing on everyone around him that will make you want to punch his lights out even if he wasn’t a murderer. he also cheats at a small in-class game and videotapes his next door neighbor stripping. In this regard, Brian Bonsall (most notable for being in Family Ties) gives a fantastic performance as Mikey (he’s certainly mastered the stone cold glare). There aren’t any really bad actors in this movie, given that some of the dialogue is very corny, especially in the scenes where Mikey attempts to romance his teenage neighbor.

And the other noteworthy aspect to talk about are the characters, AKA the candidates for the stupidest individuals ever to be placed in a horror movie. Seriously, these people give the bimbos in Slumber Party Massacre III a run for their money. For the opening murders, it’s actually plausible that Mikey could have pulled them off because of how vulnerable everyone else was. For the murders that start around the last half-hour, the filmmakers stretch logic to its breaking point to make Mikey have the upper hand. Take the scene where Mikey’s new mom walks in on Mikey watching a video of him murdering his previous family, to which she responds by sitting on the couch and watching in disbelief. Then, Mikey picks up a hammer and slowly walks towards her as she calmly tells him to stop and put it down. I won’t spoil her fate, but it’s a riot. In fact, because of this, Mikey may be the only likable character in the movie (despite being a despicable little brat) because he’s the only one who’s not a complete moron. Why anyone doesn’t kick him in the ass and get a new shoe in the process is beyond me.

I may hate Mikey with a fury matched by no other, but I found Mikey to be an enjoyable movie. It’s your standard early nineties killer kid flick with a few fun touches, like the total brat of a killer, the inventive deaths, and some really dark moments. So dark, in fact, that Mikey remains banned in Britain! Now that is a winning reason to see this right there! Of course, you’ll also laugh yourself silly as the Darwin Awards pass themselves out on bloodstained platters left and right, but that’s what makes Mikey just that much more fun. And some lame one-liners (“Teach me how to die!”) that Bonsall spews help. Mikey received an OOP DVD release a while ago, and since prices on that could probably buy a new boat, the best chance anyone would have of snatching this minor gem up would be on VHS.
Mikey is a well-made movie, but I’m still unsure if it was meant to be taken seriously or all that laughing I did was intentional. Either way, if you get a kick out of tiny terrors, don’t you dare pass this one up.