The Walking Dead Recap: The Governor is Back and Wants the Prison

This Walking Dead recap will cover both of the episodes that centered on the Governor. While Rick, Hershel, Maggie and Carl were fighting off the epidemic at the prison The Governor was re-emerging after killing most of the Woodbury group. In the last two Walking Dead episodes Live Bait and Dead Weight we have seen what happened to The Governor after he murdered his own people and took off with Martinez and Shumpert. David Morrissey gave an inspired performance in both episodes.
No Walking Dead recap would be complete without mentioning that the two episodes that focus on The Governor are based on the books Rise of the Governor and The Road to Woodbury that explore the history of The Governor. Although the series is different from the story in the graphic novels some of the characters mentioned in the graphic novels and books do appear in the Walking Dead TV show.
Live Bait made it seem as if The Governor might have changed his ways. After the massacre The Governor returns to Woodbury and burns it down. He takes off with Martinez and Shumpert. The Governor appears to go into an almost catatonic state. He is silent and unresponsive. One morning he wakes up to find Martinez and Shumpert have taken off and left him alone with a few supplies. He begins to wander. While wandering through an abandoned town he finds a barn where people have spray painted messages to their loved ones, warning them against going home and announcing the names of some people who have died. It is a poignant moment that once again shows us the desolation of the post-zombie apocalypse world.

The Governor seems to not care if he lives or dies. He wanders aimlessly and in an apparent state of shock. When he is in a town and holed up in a building waiting for Walkers to move out of the street he sees a little girl about Penny’s age beckoning to him from an upstairs window in a building across the street. Intrigued he enters the building and finds the girl, Meghan with her mother Lilly, aunt Tara, and grandfather David. David has advanced lung cancer. The family has been living in their apartment since the apocalypse started making do with supplies they found in other apartments in the building and what they could scrounge on limited supply runs. 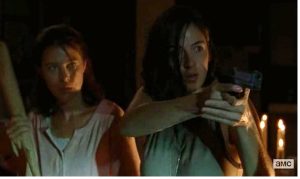 Lilly and Tara are wary of The Governor but let him spend the night in an apartment on the same floor. Lilly brings him some food, which is pours out the window. The Governor seems distant but also like someone who is grieving and not so much the ruthless killer that he was in the finale of Season 3. The next day The Governor intends to leave and keep moving but he is drawn into going on a run to a nearby nursing home to find oxygen tanks for David. David is near death, but in order to spare Meghan from any more suffering he agrees to go find oxygen. After he is nearly overrun in the nursing home he brings back a couple of oxygen tanks.He and Meghan bond quickly, and he keep delaying his departure.
David dies, and turns while Meghan, Lilly and Tara are grouped around his bed. Because they have not been out in the world they don’t know that everyone is infected and will turn after death, even if they are not bitten. David turns and attacks the girls. The Governor, who now goes by the name Brian Heriot, puts David down and gets ready to leave. Lilly tells him that she, Tara and Meghan are going with him because there is no reason for them to stay in the apartment anymore. They want to find other survivors and a safer place. They all set off.
The Governor and Lilly begin a romantic relationship and it seems as if The Governor has returned to being a rational, caring man. He has a family again and seems to slowly becoming less of the cold and calculating governor and more of a family man just trying to protect his family. Live Bait ends with the small group coming upon a herd of Walkers. They run. The Governor, carrying Meghan, falls into a Walker pit almost identical to the Walker pit he had built in Woodbury. The Governor kills several Walkers with his bare hands to protect Meghan in some of the most epic kill scenes in the entire series. The episode ends with a face peering over the edge of the Walker pit – Martinez’s face.

Killing Walkers in the pit with his bare hands

Dead Weight picks up with Martinez helping Meghan and The Governor out of the Walker pit. Martinez accepts that The Governor is now calling himself Brian but tells him that the only reason he is allowing the group to stay is because of Meghan. He tells The Governor that everyone has to contribute or leave because that’s how the group is set up. Martinez has been trying to recreate Woodbury as much as possible and to give people some security. But he is not as capable of a leader as The Governor was. One of the members of Martinez’s security squad, Mitch, hazes The Governor and harasses him calling, “One eye Bri” all the time. Mitch is former military and managed to leave Fort Benning with a tank, which provides some security for the group.
Throughout the episode we see The Governor prove himself to the other members of the security team while maintaining his appearance as a family man protecting those he loves. On a run they find beer and a bottle of whiskey. Back at the camp they all drink. Martinez gets drunk, and bring out The Governor’s golf clubs which he saved from Woodbury. Together the two stand on top of The Governor’s trailer and hit golf balls. Martinez offers to share leadership of the group with The Governor and The Governor seems to snap. He hits Martinez with a golf club, throws him off the roof of the trailer, and drags him to the Walker pit. He throws Martinez into the pit. 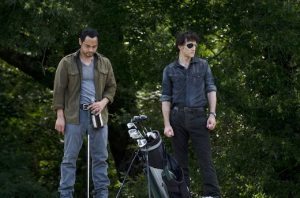 Golf with The Governor turns deadly for Martinez

In that one scene The Governor stops trying to walk the line between being a normal family man and being The Governor. It’s almost as if a switch got flipped and The Governor, hellbent on protecting his new family, returns for good. He tells his new family that he can’t lose them again, implying that is no longer thinking rationally and can no longer distinguish the family he had before and the family he has now. He takes over the leadership of the group and becomes obsessed with finding them a safer spot to stay. He remembers the prison.
The episode ends with The Governor paying a surreptitious visit to the prison. He sees Carl and Rick eating peas in their makeshift garden, which is where the last episode in the prison ended, and he sees Hershel and Michonne out burying bodies. The episode ends with him pointing his gun at Michonne as she and Hershel laugh and joke.

The Governor wants the prison for his new family

So now we know that The Governor will be coming to exact his revenge and take the prison from Rick and the group. And if anything The Governor is even more dangerous now because he is protecting his new family. He has a new band of followers and a tank. The mid-season finale next week will bring fans the battle for the prison that didn’t happen last year. This time not everyone is going to make it out of the prison.
We know that at least one major character from the prison will die, and there may be more. Internet speculation is that Hershel and possibly Beth will be the characters to die and that Michonne will survive. But, as fans know, no one is ever totally safe in The Walking Dead. There will be no way to know which characters are going to die until the episode airs but it’s certain that the mid-season finale will leave fans heartbroken. Rick and The Governor will finally battle for the prison and nothing will be the same after that.
In Author: LivingGeekGirl by
Sonya Iryna
/
Leave a comment
Share: