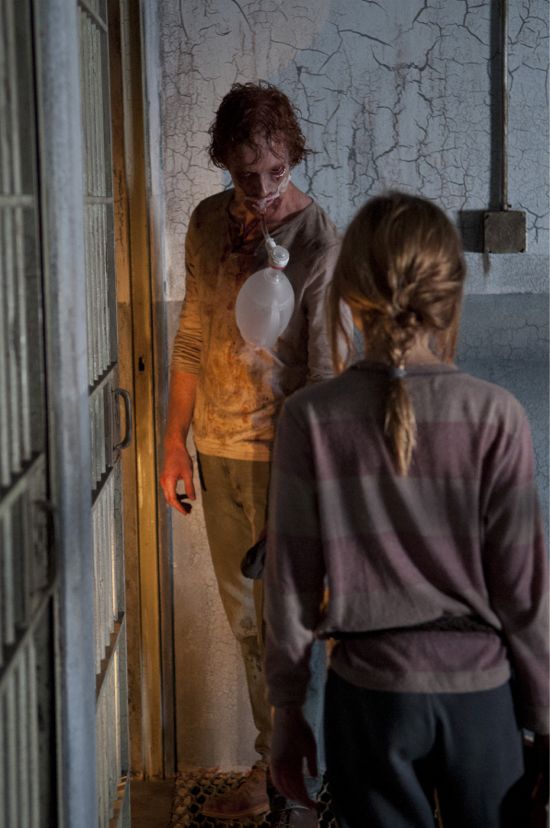 The Walking Dead Season 4 Episode 5 “Internment” aired on November 10th and continued The Walking Dead’s relentless momentum. In this episode the illness ravaging the prison group came to a head as the sick tried to hang on until Daryl, Michonne, Bob and Tyreese made it back from the veterinary school with life-saving medicine. Many of them couldn’t wait, including Dr. S who succumbed to the illness and had to be put down by Hershel.

Hershel takes care of the sick in Cell Block A

When Rick first returns from his run to get meds Maggie asked him why Carol wasn’t with him. He explains that Carol killed Karen and David and that he wouldn’t allow her back in the prison. Maggie is upset, but tells Rick she thinks he did the right thing for the group. Rick then visits Carl in the safe ward where the children are and tosses him a bag filled with the food he was able to find on the run. He tells Carl to give the children some fruit leather that is in the bag but to be sure that they all brush their teeth afterward. Rick’s attempts to create some kind of familial structure for the kids is very poignant when balanced against the horrors that are occurring the sick ward at the same time.
The episode centers on what unfolds in the isolation block as the sick people, Dr. S and Hershel wait for Daryl and the others to get back with medicine. Scott Wilson gives a tour de force performance in this episode. Hershel, visibly weary with fatigue and sorrow, takes care of Glenn and Sasha and helps Dr. S while also dealing with the dead. He tries desperately to shield the children who are sick from seeing the dead put down one by one. He insists that each person, after they die, be put on a gurney and taken back into the execution chamber to be put down.
Dr. S, knowing he is close to death, tells Hershel that he needs to take more precautions and make sure the sick are locked in their cells so that when they die and turn they can’t harm the others. He shows Hershel a shotgun that he has kept in his cell and tells Hershel to use it to ensure the safety of the ones who live. Hershel eventually does need the shotgun after multiple people die, and turn, and the cell block becomes a ghoulish bloodbath.
Throughout the chaos occurring in the cell block Hershel tries desperately to save the ones he can, protect the children from the gore and the horror of what is happening, and save Sasha, Glenn, and himself. He comes very close to dying himself and is only saved when Maggie shoots her way into the cell block.
Lizzie also shines in this episode in a disturbing and unsettling way. Lizzie is one of the kids kept in isolation because she is sick. She is wandering around the cell block and finds Glenn, barely conscious, being attacked by a Walker. Glenn had been using the only bag valve mask that they had to try and keep a man who was near death alive long enough for Daryl and the others to get back.
The man died and turned almost instantly. Glenn, already weak and almost passing out, was struggling to fight off the newly turner Walker when Lizzie appeared. She lures the Walker away from Glenn calling him like a dog to follow her down the walkway. She trips and falls, but Hershel appears at that point and saves her. 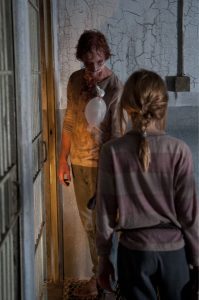 Lizzie lures a Walker away from Glenn

She is also in the cell when Hershel and Maggie fight to save Glenn’s life. Glenn is hemorrhaging badly and coughs out a huge pool of blood onto the cell floor. Creepily Lizzie starts running her boot through the blood making patterns in it.
When the carnage is finally contained and Glenn and Sasha are safe for the moment Hershel, in a moment that broke the hearts of legions of fans watching, sits in a cell with his Bible and cries. Scott Wilson was spectacular in this episode. 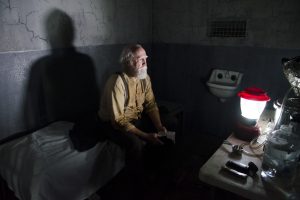 Hershel tries to find comfort in his faith

While things are going to hell inside Cell Block A Rick and Maggie were outside trying to protect the outer fence of the prison. As Rick and Maggie kill Walkers and work on propping up the outer fence that is beginning to buckle as the Walkers push against it they hear a shot from inside the prison. At first Maggie continues to shore up the fence but when they hear additional shots Rick tells her to go check on Hershel and those who are isolated in Cell Block A.
This episode was one of Lauren Cohan’s best performances as Maggie showed how capable she has become since leaving the farm. When she gets to the isolation ward she finds absolute chaos. Many of the people in isolation have turned, after dying from the virus. They are even more gruesome than normal Walkers as the effects of the virus caused them to die from massive hemorrhages. With blood dripping from their eyes and mouths they are truly terrifying to behold.
When Maggie arrives on the scene Hershel is desperately trying to fend off several Walkers. Unable to break through the heavy window in the entry to the block she is forced to shoot out the glass in the death chamber at the back and go in that way. She manages to save Hershel and help him get control of the cell block.

Maggie shoots her way into the cell block

But while she and Hershel are fighting for their lives Glenn comes dangerously close to losing his. As fans watched on the edge of their seats Glenn began to hemorrhage and turn blue. Hershel manages to snatch the only bag valve mask in the cell block off of the face of a Walker to intubate Glenn and save his life. For several heart stopping minutes fans thought that Glenn might be the first major character death this season. But thankfully Glenn manages to survive, barely.
While chaos is erupting in the isolation block Rick is trying to deal with the Walker threat outside the prison which boils over when he unable to hold back the massive herd outside the fence. The herd finally managed to break through the prison’s defensive outer fences and flooded the prison yard. Rick, left alone to battle the herd reluctantly called on Carl for help.
One of the most memorable scenes in the episode was Rick and Carl, falling back to the inner prison courtyard and opening up a cache of weapons and ammo stored there for emergencies. They are more like partners than father and son as they use automatic weapons to gun down the enormous herd of Walkers. Rick opens a small hole in the inner fence to set up a choke point. As the Walkers crowd through the narrow opening Rick and Carl let loose on them with automatic weapons.  Fans have to wonder, based on Carl’s chillingly methodical ability to massacre Walkers, if Rick’s attempts to save Carl’s humanity will be successful.
Daryl’s group doesn’t appear until the last few minutes of the episode, after some of the chaos in Cell Block A has subsided. Because of the chaos Carol’s absence isn’t really noticed by Daryl until the next day.
When Daryl asks Hershel where Carol is Hershel simply tells him that Carol is ok but that he needs to talk to Rick about her. At the very end of the episode Rick is on his way to tell Daryl what happens but decides to put off having what is sure to be a difficult conversation and instead checks on some of the crops that are growing in the inner field with Carl. Fans will have to wait a few more episodes to find out Daryl reacts to Carol leaving the group.
In the last frame of the episode another threat appears outside the prison. The Governor appears in the frame watching what is going on in the prison. The next two episodes center on The Governor’s story and fans will learn more about Rick’s nemesis and how he became The Governor. There are only three episodes left until the mid-season finale and speculation is that the mid-season finale will feature The Governor’s attack on the prison.
It’s safe to assume that if the show keeps the incredible momentum that it has had from the start of Season 4 Episode 5 is not going to be the most intense episode of the season although it was the most intense episode so far. Scott Wilson’s mesmerizing performance is the perfect portrayal of the balance of humanity and detachment that is necessary to survive in The Walking Dead world.
In Author: LivingGeekGirl by
Sonya Iryna
/
Leave a comment
Share: