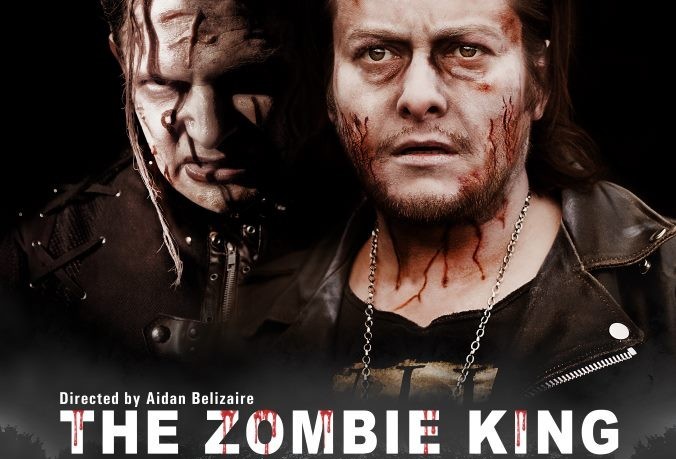 THE ZOMBIE KING is the debut feature length British horror/comedy film by Aidan Belizaire. It features a group of locals, trapped in a small English countryside town as the army try to combat the hordes of zombies starting to appear.
Edward Furlong and Corey Feldman were both shown to be the two main stars of the film, both listed first in the credits and having their faces on the poster, but in the film this was not the case. Furlong had around 15 minutes of screen time, whereas Feldman had a less impressive 5 minutes on screen. This was certainly reminiscent of the low budget horror film CAMP HELL (2010), and how they promoted Jesse Eisenberg as the main star, with only his face on the poster- yet his role was not at all prominent. This is definitely a clever marketing tactic used to sell the more ‘famous’ actors to widen their audience. The real stars of the film were the three comical actors who play a milkman (David McClelland), a postman (George McCluskey), and a traffic warden (Michael Gamarano). These three actors were the highlight of the film, all giving strong performances and amusing one liners. I cannot praise them enough.
Since this is a zombie film, the appearances of the undead is usually an aspect that is worked on a lot, and is made to look as realistic as possible. In this film however, the zombies just look like normal civilians but with a bit of mud on them. They look very monochrome and bland which isn’t a good thing, especially in this film’s case as a lot of the setting is dreary and bleak. The zombies blend in with the backgrounds as well as the living, which make it hard for the viewers to determine if they are in fact the recently deceased walking the earth again. An interesting point that is dissimilar to other zombie films of this time is that the zombies were brought to life through voodoo, rather than a virus or infection. It was great to see the film going down this route and bringing back themes that are so rarely used anymore. Even though the whole voodoo concept isn’t acknowledged until the third act of the film, it is still very fascinating to watch. In particular the scenes where they find out how to kill zombies, because it is certainly not a shot to the head in this film.
As a horror/comedy hybrid, I expected there to be an even mix between the two, but comedy definitely prevailed. The level of comedy was the same that is found in the British COCKNEYS VS ZOMBIES (2012), and the screenplay was so brilliantly written. Each character’s personality shone through and made it very interesting to see how they reacted to certain events that happened in the film. As for horror, the only remotely scary part of this film was Feldman’s character – Kalfu, and even that only lasted a few short minutes. The actual zombies were not in the least bit frightening. They were so pathetic actually, that they could be knocked down for good by being hit with a milk bottle – but of course, this just adds to the overall humorous side of the film. As for the gore that is normally associated with a zombie film, there is only one scene containing it and it is very close to the end of the film. Perhaps the zombies would have been more of a threat to the characters if there was earlier scenes showing a character die a bloody death. Instead, we just see the characters run from the zombies for the whole first half of the film, which isn’t very exciting at all.
The final scene is without a doubt one of the best parts of the film, as it is reminiscent of the ending of NIGHT OF THE LIVING DEAD (1968). I’m not sure if the filmmakers intended this, but it was a nice throwback to one of the most influential zombie films. This film would have worked much better if it concentrated on the comedy side more, and how the locals deal with the zombies, rather than them trying to defeat the source of them. I’d watch this film as a comedy, alike with SHAUN OF THE DEAD (2004) because as a horror, it has just not succeeded.