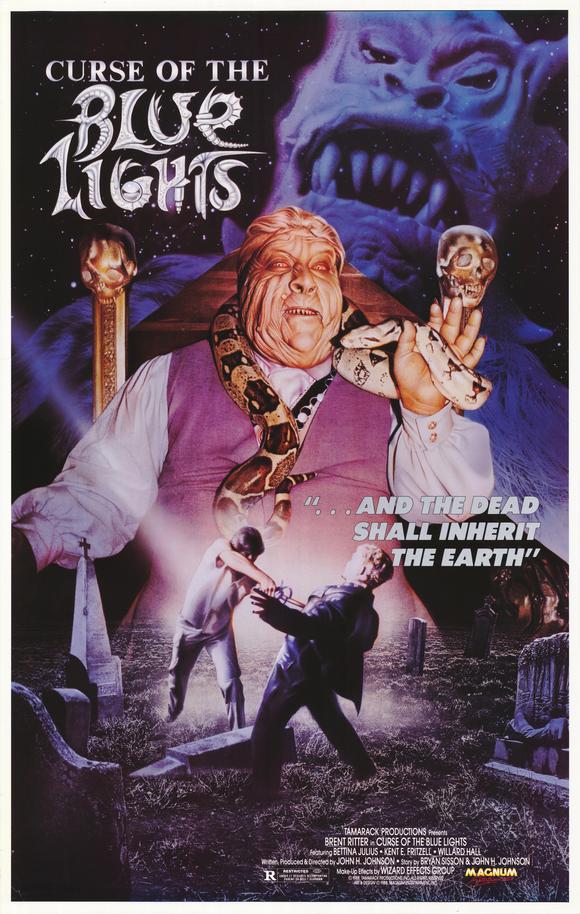 Magnum Entertainment and I don’t exactly have a very good relationship. Magnum was a home video company in the eighties, and it seems (to me at least) that they went out of their way to release the worst of the worst of eighties horror movies. Sure, they did release classics like Bad Taste, Nail Gun Massacre, Suspiria, Zombie, and a few more, but with films like Goodnight, God Bless, The Night after Halloween, and With Friends Like Thesestinking up their catalogue, who can disagree? Now we have another ultra-low-budget movie that few people have heard of that was released by Magnum called Curse of the Blue Lights. And, me being the buffoon that I am, I decided to give it a spin. Sheetar help me.

A group of teens in a small Colorado town head up to Blue Lights, the local make-out place, one night to engage in typical hormonal activities. However, their lovemaking is interrupted when they see two mysterious blue lights floating in the distance. Being the idiots that they are, they decide to investigate and find what they think is a large statue of a bizarre creature buried near the riverbank, as well as an ancient medallion. The teens take the medallion, and when they attempt to show the local police the statue, it has disappeared! It turns out an undead monster named Loath and his two minions are planning to resurrect the Muldoon Man, the long-lost missing link, using the medallion. In order to prevent the destruction of humanity at the hands of this malevolent creature, the young adults must battle Loath’s army of zombies and prevent the Muldoon Man from taking the world!

Well, that certainly sounds original, doesn’t it? Well, it actually took me awhile to figure out what movie Curse of the Blue Lights molds itself after: Phantasm! Sure, the specifics are different, but both movies feature young adults discovering something strange going on at the local cemetery, and in the end they must fight the leader and his evil undead minions. There’s also a scene here where the teens go visit a witch that’s reminiscent of when Mike went to visit a psychic in Phantasm. Other than those a few minor instances (Loath does say “Boy” at one point), the two are very different, and I was surprised how original the plot of Curse of the Blue Lights was.

Well, what do you know…Magnum did right with this one. Yeah, it’s as low-budget as you’d expect, but this is one of those instances where the miniscule budget adds to the charm of the film rather than detract from it (for the most part). I really do get the feeling that the filmmakers put their heart and soul into this project, and while it may not have sizable production values, good acting, or any sort of scares, I still enjoy it for what it is. All the actors were pretty bad and under-acted to the extreme, with the exception of the actress who played the witch, who was the complete opposite, as she had one of the worst cases of overacting I have ever seen. Then again, maybe it just seemed like that when compared to the other actors. Then there’s the actor who played one of Loath’s minions, whose dialogue delivery sounded like Ben Stiller’s in Tropic Thunderwhen he went “full-retard.” The characters are likable enough, but due to rather bland dialogue, really aren’t very interesting or memorable.

Maybe the strongest part about Curse of the Blue Lights, and its most prominent advertising point, is the gore and make-up effects. They were done by Mark Sisson (who did some of the effects for A Nightmare on Elm Street Part 4: The Dream Master that same year) and they do look pretty good for a low-budget cheesefest. Part of the ritual to resurrect the Muldoon Man is dissolving some people, so we get to see dead bodies slowly dissolve, and it’s great. When we do see the Muldoon Man in all his glory, he basically looks just like a rubber monster from any campy Corman monster movie you’ve ever seen. It’s a terrible effect, but massively enjoyable.

Of course, the film does have its so-bad-it’s-good charms. The acting contributes heavily to the hilarity at hand here, as well as the line delivery and how Loath and his minions always speak with a lisp due to the fake teeth they have to wear. Then there’s the climactic sword battle between Loath and one of the teens, which is easily the worst sword battle anyone has ever seen. They both move very slowly to make sure they hit their marks, and it’s all set to this ridiculous synthesizer score that sounds like a low-budget family movie reject score. Yes, I know; it’s brilliant.

Alright, Magnum, I still haven’t forgiven you for the pain I endured watching some of your titles, but at least you delivered with this movie. Unfortunately, I realized afterwards that there are two versions of Curse of the Blue Lights; a cut version and an uncut version. I haven’t seen that cut (yet), but this would explain a lot of the really awkward edits in the movie and while the gore present is great, the film did seem a little dry. Anyway, it’s a fun film no matter what version you have. I wouldn’t exactly say it’s for everyone, but fans of corny late-eighties monster movies should get a kick out of it (I know I did). It’s got really good gore, cool monsters (not as cool as in, say, Spookies or Neon Maniacs, but still neat), stereotypical (and very, very stupid) characters, a cheap synthesizer score (that actually works for the movie, in my opinion), some good camerawork (the opening scarecrow attack was surprisingly well shot), and the essential so-bad-it’s-good moments. It does get dull in some scenes where the dialogue seems to take over, but that’s a minor complaint.
The Verdict: Curse of the Blue Lights isn’t a good movie (at all), but it’s got lots of heart, it looked like the filmmakers were having fun, and at least it tries to do something original, and with some added-in gore and monsters, what more could you ask for?
Score: 8/10
Clips with a Hungarian dub. One of the funniest scenes in the movie occurs at about the 5:00 mark.
Blue Lights Montage (Hungarian)
EDIT: A day after writing this, I have discovered that Curse of the Blue Lightsis actually getting a DVD release in 2013 from the benevolent folks at Code Red DVD! Three cheers for them! For more information, follow the link:
http://codereddvdblog.blogspot.com/2012/11/code-red-dvd-for-2013.html